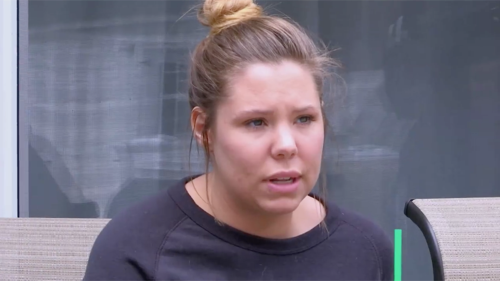 Tonight on MTV their series Teen Mom 2 continues with an all new Monday May 30, season 7 episode 11 called “Turn the Page” and we have your weekly recap below. On tonight’s episode, Jenelle Evans’ medical problems lead to a fight with Barbara; Leah Messer and Miranda make up.

On the last episode, Kailyn worked on her relationship with Vee; Cole took Aubree to a father-daughter dance; Jenelle sought help in New York for mysterious medical ailments. Did you watch the last episode? If you missed it, we have a full and detailed recap right here for you.

On tonight’s episode as per the MTV synopsis, “Jenelle’s medical problems lead to a fight with Barbara; Leah and Miranda make up; Aubree asks a big question of Adam; and Kailyn rebuilds her relationship with Jo while distancing herself from Javi.”

This week on Teen Mom 2 Leah is with her friend Kayla and they are playing with her son. Leah tells Kayla that she talked to Corey about the video she has of Ali’s conversation. While they are talking Miranda sends Leah a text expressing her displeasure at the conversation that Leah had with Corey. Kayla says “You should be able to talk to him about stuff like this without it being a fight. What are you going to say to her?” Leah says “Nothing right now. I’m too upset to respond to her.”

Kailyn is telling her friend about her lunch with Vee. She tells her “Vee was saying that she wants me to sit down and talk to him because she doesn’t like it being so tense between all of us.”

Chelsea is talking to her friend about the situation with Adam. She says “Adam has hired a lawyer and is contesting the order to readjust child support. I wasn’t sure whether Adam’s parents knew about the father-daughter dance so I told them. They told me that they didn’t know anything about it. They also said that they were glad she had Cole to take her. It feels weird to know that Adam’s parents approve of my relationship with Cole, but it also feels good.”

Janelle continues to worry about her health. She tells David “I went to the Dr. and they stuck me with needles and gave me acupuncture. Now my knees hurt. At least we know it’s not muscular. It has something to do with my nerves.”

Leah is outside with her friend Kayla. She tells her “Before I went to therapy I would have texted Miranda back and been as snippy as she was. Going to therapy has taught me that I need to find new ways to deal with situations.” Kayla tells her “You have the right to feel upset.” Leah starts to cry from frustration.

Nathan and his friends are out bowling when Janelle comes back into town. She picks Kaiser up from Nathan’s sister and head home so Janelle can rest because she is still in pain. Meanwhile, Nathan’s friends ask him about Kaiser. Nathan says “I don’t know anything about my son.” His friend asks “Does Janelle know that you have filed papers?” Nathan tells him “No.” They also ask about the assault charge that Janelle has pending against her. Nathan tells him “The case has been postponed.” Jessica says “They keep hoping that we won’t show up to the next hearing. God has this in his hands and Nathan will win by doing the right thing.”

Aubree goes with Adam to a weight-lifting competition. Paislee is there as well. Adam wins first place in the competition. Aubree is excited and cheers for her dad. When Adam is done Aubree asks him “Why didn’t you come to the Father/Daughter dance?” Adam doesn’t have an answer for her.

Kailyn is in New York to meet with counselors and talk about what she plans to do after graduation. She tells her counselors “I want to do hosting on TV.” After the meeting with her counselor, she goes out to dinner with her friends. They ask her how Javi is doing and she tells them “It is really hard for him right now because he is stuck there and life for me is moving on.”

Leah finally responds to Miranda’s text and lets her know that she just wants to make sure that her girls are ok when they are with her and Corey. Meanwhile, Corey talks to his father and tells him “Leah and I have been getting along much better since court. She and Miranda even managed to have a civil conversation. I am thinking about trying to find us some co-parenting classes.” His dad is happy to hear the good news and thinks the parenting classes are a good idea.

Janelle is going to another hospital to get more tests. While she is there Barb calls to check on her. Janelle tells her “I am still struggling. I have had night terrors.” Barb says “Maybe I should bring Jace tomorrow.” Janelle says “No, I want to see my son.” Barb says “Ok. Well I’ll bring him to your house and you can rest until I get there.” When David and Janelle get back to the house David tells her “I’ll go get your meds while you wait for your mom to bring Jace.” David worries that she may become addicted to the meds and tells her “Only take it when you need it. That way your body doesn’t build up a tolerance to it.” Janelle tells him “I have no intention of getting addicted to any medications because I am working on finishing school and getting Jace back.”

Leah and Corey meet up to exchange the kids. Corey and Leah talk about their situation and Corey says “Miranda and I talked about the video and we are going to work on it.” Corey also tells her “I think we should try that co-parenting therapy before we have our next big blow up.” Leah agrees. She says “I thought the texts between Miranda and I were positive.” Corey agrees and tells her “We have seen a huge change in you. We aren’t trying to change the co-parenting agreement. We just want to make sure the wording is right.” Leah agrees and they part ways.

Kailyn and Jo meet up and talk. Jo tells her “There are times where we get along great for a while and then something happens and it all goes away.” Kailyn tells him “I just want to make sure that we are on the same page so that our kids can see healthy relationships.” She also tells Jo about the troubles between her and Javi. Jo says “I’m sorry to hear that you guys are having trouble. I just want you to be happy.”

Chelsea picks up Aubree from Adam’s parents and she is happy to be back with her mom and Cole. Chelsea asks Aubree “Did you talk to your dad about the Father/ Daughter dance?” Aubree says “Yes.” Chelsea then asks “Did he tell you why he wasn’t there?” Aubree says “He did say, but I don’t remember what he said.”

Janelle and Barb begin fighting when Barb tells her that she has to be available on the 5th of March because Jace has a soapbox derby and she has to be in New Jersey with Janelle’s sister Ashley. This infuriates Janelle who tells her mom “You were never there for me, but you always have time for my sister and everyone else. I have been to the hospital four times in the last month and you haven’t been there.” Barb laughs and calls her a hypochondriac. This infuriates Janelle even more and the argument intensifies. Eventually, Barb takes Jace and leaves the house. Janelle breaks down, and after locking the door, David comes to comfort Janelle. He tells her “I am with you every day and she has no idea what she is talking about. It really pisses me off.”