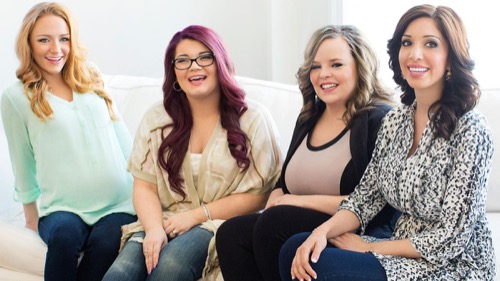 Tonight on MTV Teen Mom OG returns with an all-new Monday, October 17, 2016, episode and we have your Teen Mom OG recap below. On tonight’s Teen Mom OG Season 3 Episode 10, “Lemons Into Lemonade,”  Simon Saran shows up for the grand opening of Farrah Abraham’s frozen yogurt store.

On last week’s episode, Amber Portwood, who fears that she’s developed a new addiction to food, consults a doctor about her weight? Did you watch the episode?  If you missed it we have a full and detailed Teen Mom OG recap from last week, right here!

On tonight’s episode of Teen Mom OG as per the MTV synopsis, “Amber and Gary prepare for Leah’s first day of school; Catelynn struggles with her anxiety and depression; Ryan takes Bentley for the weekend, but Maci fears he hasn’t changed; and Simon shows up for the grand opening of Farrah’s frozen yogurt store.”

#TeenMomOG starts with Amber shopping with Leah and Matt for school clothes. They choose clothes including a special outfit for the first day of school. They take off and realize they forgot a dress. The clerk runs it out to them. Matt complains all of that cost $900.

At Gary’s, Amber drops off Leah and the school clothes. Gary and his wife are shocked by how much Amber spent on the school clothes. Amber and Matt leave. Maci takes a call from Ryan who asks if Bentley can come over to go to the waterpark. She agrees.

Maci tells Taylor that Ryan called to have Bentley come stay at his house. They mention how long it’s been since Ryan talked to her or his son. Taylor says she should let Bentley go and Maci agrees. Taylor says it’ll be fun but Maci worries about it being just Ryan there.

Farrah is prepping for her yogurt shop opening. She teaches the girls how to use the social media for the store. Later, Farrah has dinner with her parents to celebrate her opening. Amy, Michaels’ girlfriend, and Sophia are there too. Farrah is confident with her new employees.

Michael says they have always stood behind her and always will. Debra says she has amazing parents and Farrah says she taught them to be amazing parents. She’s awful as usual. Catelynn is with her pal Alexa talking about her issues.

Cate talks about her paralytic panic attacks and how she can only lie in a ball and cry when they hit. She says she hasn’t had one since she went to treatment. Later, they go to April’s house to swim and Cate is with Nova in the pool. The pig Cate bought and abandoned is there.

Cate starts to have a panic attack and leaves Nova with April and Rich. Tyler is at the new house taking care of stuff and he calls Cate to ask what happened. She tells him about the panic attack and says she left her moms and says she’s seeing her shrink tomorrow about new meds.

Tyler is frustrated as usual but doesn’t say anything. Maci watches Bentley working with Jayde on her walking. She’s toddling along. Jaala the producer finds Ryan dealing with a fallen tree in his yard and he says Bentley is coming to visit with him not his parents.

Ryan says he created the monster by letting his parents have Bentley too much because he didn’t move out. Ryan says he’s still not talking to his dad. Jaala asks if he minds sharing Bentley with Taylor and he says he’s a good guy.

Leah starts school tomorrow and Gary and his wife got her a new lunchbox. Gary has Leah pick out an outfit for the first day and she chooses something her step-mom got on clearance instead of one of the more spendy outfits that Amber got her.

Gary talks to Leah about behaving at school and then about her schedule. He says she’ll be with him all week and then will swap weekends with her with Amber. Leah says it’s okay and Gary says just tell me if you want to see mommy.

Simon comes for a visit

Farrah goes to pick up Simon who’s coming to help with her yogurt shop opening. Farrah immediately starts nagging and chewing him out and he laughs. She micromanages and nags and then tells him not to help if he’s not going to do what she says. Awful again.

Simon starts snacking and Farrah nags him some more. She tells him to stock the cooler and he says everything looks fine and she’s relentlessly terrible to him. Farrah is hostile to him and he eats and totally ignores her rants and attempts to belittle him.

Cate is heading to her shrink appointment and she’s late and stressed out. One of the producers is with her. They arrive and she rushes inside. She’s back out five minutes later and they told her she had to reschedule because she’s 20 minutes late.

Cate is upset because Dr Drew helped her find this guy. Jessica the producer talks to her as Carelynn calls herself stupid for missing the appointment. Bentley is at Ryan’s house playing pitch and he comes out with a puppy for Bentley.

Ryan talks about their plans to go to the waterpark before he takes him back to Maci. Taylor’s friends Ryan and Jerid come over and drink a beer and talk about having three kids in the house. Taylor is Bentley’s baseball coach too so he’s really busy.

They discuss him being over at Ryan’s. They talk about how much Bentley will appreciate what Taylor does for him. Taylor says he’s doing what he should be doing. He says he doesn’t want Bentley to ever feel like he’s a stepson and shows them his Bentley tattoo on his arm.

Leah is ready for her first day of school and Amber is upset that Leah is not in one of the outfits she got her and says it’s stupid. Gary talks to his wife Kristina about dropping off Leah and he says there were no explosions with Amber. They talk about the schedule change.

Emilee toddles around. Kristina says Leah has talked to her about her not getting as much attention as Amber’s house. She encourages him to talk to Leah about it. Farrah does some social media posts for the grand opening. Farrah meets with a local reporter and talks her usual crazy.

Later at her house, Debra asks Farrah and Simon if they will ever be more than just friends. Simon says time will tell. Farrah rolls her eyes. Farrah says she’ll be engaged and married to someone else by the time Simon gets around to it.

Farrah says she’s an awesome person and who wouldn’t want to talk to her and Simon starts laughing and can’t stop. Farrah is offended and nutso. Cate comes home and Tyler asks why she’s there. Nova points to photos and says names.

Cate says she rushed and was late and Tyler shakes his head that she was that late. She says she can’t do anything right and says her alarm was set but she hit snooze. Tyler says you shouldn’t hit snooze and just get up. Tyler says he won’t apologize for saying that.

Tyler says it was important and she knew about it for a while. He says she just should have gotten up and gone. Cate starts crying. Tyler says he doesn’t want to make her feel worse but she does and she’s crying.

Maci says she was worried about Bentley going to Ryan’s but he seems to be having a good time. Maci says it’s probably easier without Jenn and Larry dictating what happens with Bentley. Maci says Ryan goes through phases so maybe this will continue.

Taylor says it’s awesome when Ryan does things like this. Maci hopes he won’t go MIA again. Amber and Matt hang out at home and talk about Leah starting school. Amber says it sucks and let’s see how the year goes without having her all week and plans to talk to Gary.

Amber wants to pick her up from school on certain days and doing homework and mom stuff. Gary picks Leah up from school on her first day of second grade. Leah tells him she saw a boys underwear and Gary teases her and says he’s a bad boy.

Leah talks with Gary plus yogurt

Gary says he loves her and she says she knows. It’s opening day at Farrah’s yogurt shop and Michael gets into the mascot outfit and Farrah cuts the red ribbon. There’s a good sized crowd there and Farrah greets everyone. There’s also media there and Simon is on hand too.

Farrah tells her mom to get out of the pictures when Farrah wants to get pics. Later, she’s with her parents and Debra says it went well and Farrah says everyone loved it. Farrah says she’s proud of herself and both are dismissive of Michael.

Cate goes to a session with Kathleen and says she had a panic attack but it wasn’t as bad as before. Cate says she did better. Cate then tells her she missed her doctor appointment because she woke up late. She says Tyler was upset with her and she says she told him sorry then broke down.

She says she was mad at herself and says life would be better if she wasn’t around. Kathleen asks why she’s saying that when she just missed a doctor’s appointment. Cate says her mental illness is getting in the way of other people’s lives. Cate says she wonders if Nova would be better off without her.

Kathleen says that’s not true. She asks what Cate is doing that is so damaging. Cate says she doesn’t want Nova to remember her freaking out and not getting out of bed. Kathleen says that’s like her mom’s voice in her head and it’s issues from her childhood not the mental illness.

Cate says others have worse childhoods than her and Kathleen reminds her that her mom didn’t protect her as a kid and she grew up rough. She says her mom doesn’t deserve that protection. Kathleen says it’s hard to be a mom and she’s already a better mom than her mom was.

She says the world needs Catelynn since she’s good and calms her down Ryan drives. Taylor cuddles Maverick. Gary and the kids play with their lizard. Matt and Amber cuddled with their dogs. Michael struggles to get the mascot head back in the shop.