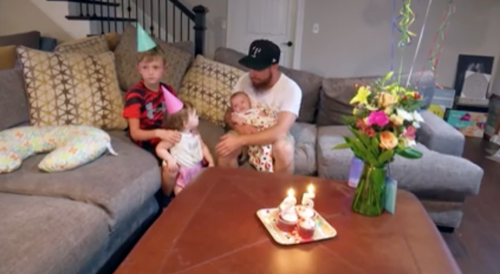 Tonight on MTV Teen Mom OG returns with an all-new Monday, October 24, 2016, episode and we have your Teen Mom OG recap below. On tonight’s Teen Mom OG Season 3 Episode 11, “Surprise Surprise!,”  Farrah Abraham deals with an employee that ‘s not living up to her standards.

On last week’s Teen Mom OG episode, Amber Portwood and Gary prepared for Leah’s first day of school; Catelynn struggled with her anxiety and depression; Ryan took Bentley for the weekend, but Maci feared he had not changed. Did you watch the episode?  If you missed it we have a full and detailed Teen Mom OG recap from last week, right here!

On tonight’s episode of Teen Mom OG as per the MTV synopsis, “Amber Portwood and Matt try to squash tabloid rumors about them, but are sidetracked by a visit from Matt’s son; and Farrah deals with an employee that ‘s not living up to her standards.”

#TeenMomOG starts with Maci and Taylor talking about Bentley starting second grade. Taylor comes up to play with Bentley in his room and talks to him about his mom’s birthday. They agree to surprise her with a cake and card. They go back to basketball.

Farrah is at her yogurt shop and Kiana, one of her employees, says she can’t use the can opener. Sophia is with Farrah and Michael and she says she added three new flavors. Michael asks if it’s going the way she wants and she says she’s annoyed by Kiana.

Farrah says Kiana is a know-it-all and that’s what makes the mess. Michael encourages her to be professional. Farrah says she’s going to tell her she’s on probation and isn’t playing around anymore. Tyler is with Butch talking about his hammock. They talk about life.

Butch talks about counseling and tells Jessica, the producer, he’ll be off probation next August. Later Tyler talks to Cate about doing something to celebrate Butch’s one year out of prison. Tyler talks about a barbecue at a park. Tyler says he and his dad never had a relationship before.

Cate wonders if it’s the first time he’s been sober this long. Tyler says it’s a big deal since he’s never gone this long without being arrested or in trouble. Over at Amber’s, Matt’s friend Jeff calls to tell him about an article saying Amber had a miscarriage. Matt looks at the story online.

Matt says he has to tell her so she doesn’t wake up and hear something else bad. Matt tells Amber there’s another article and reads it to her. Amber is annoyed and says she’s not pregnant or on drugs and is on the depo shot for a year. Amber says you shouldn’t be allowed to lie like that.

Matt says he doesn’t care what they say about him but worries about her. Amber says this depresses her. Matt says they need to say something about it. Amber says if it’ll make him feel better, she will. Amber says let’s call Dr Drew. Amber curses and says she has to deal with stuff about Matt.

Amber says he doesn’t get it and she’s been dealing with this for so long but has never said anything about it. They bicker over whether to ignore it or respond.

Maci goes over to Keelie’s house to hang out. Keelie hands her a six pack with a balloon on it. They talk about Bentley starting school tomorrow. She says she doesn’t expect Ryan to show up since he never has shown up. Keelie hands her a note from Bentley. Keelie says do what he says and go home.

Amber and Matt call Dr Drew who agrees to have them on the show to address the rumors. Matt says he likes the food in LA and is looking forward to tacos. Matt’s son Christopher calls him and says he can’t function and says he’s fighting with his GF all the time and trying to stay sober.

Chris asks if he can talk to him. Matt invites him to come see them while they’re in LA. Kiki, one of the producers, is there. Matt says his son is 25 and he lives in South Dakota. He says they talk a lot but he hasn’t seen him in a while. Matt says that’s his son that wrote the mean article.

Matt talks about his son

Matt says Chris told him that he was high and they offered him money. He says he hasn’t seen his son in 10 years and says his kid got in trouble and was in prison for a while. Matt says he can’t let him down again now that they’ve reconnected.

At Cate’s, Nova is fussy and Tyler picks up the house while Catelynn sleeps on the sofa. He’s pretty much single parenting while she doesn’t move. Later Tyler talks to Jessica the producer about Cate. He says she’s napping a lot but thinks she has the right tools to figure it out this time.

Tyler says it’s not hard for him to stay out of it since nothing he says helps her. He says he can’t say things nice enough and it’s annoying and he doesn’t get it. He says he’s working with Kathleen the therapist. He says he has to learn when not to say anything since he can’t say it the right way.

Farrah takes a call from Kiana who calls about the alarm. Farrah goes to the shop. Farrah asks why she didn’t open the door for the inventory guy. Farrah says they need to have a talk. Farrah tells her she needs to do this faster. Farrah chews her out on camera.

Maci comes home and they have cupcakes, balloons and flowers ready for her. Maci says she knew something was going on and Taylor says it’s like organizing a circus act and says he was the ringmaster. Maci and Taylor talk about Bentley getting ready for school.

She asks if he thinks Ryan will show and Taylor says no. Jaala, the producer, asks if they’ve heard from Ryan since Bentley stayed over. Maci says she only hears from him if they’re filming. Maci says they never hear from him and Taylor says it doesn’t matter.

Amber gets to meet Matt’s son Chris for the first time. They get up the next day and Amber is nervous about their Dr Drew appearance. Chris asks if he’s different than Matt expected and Amber says he was just nervous. Chris says Matt was never awful.

Amber says anyone can contact the media and say what they want and they know what it’s like. Matt tells Chris thanks for that. Amber says it’s a good way to explain. Matt asks how many times they contact him and Kiki asks how often it is. Chris says it’s constant.

Chris says he didn’t get a time and is always broke so it would have been nice to get paid. Amber says we all make bad decisions but as long as you try to fix it, this is amazing to have them together. Matt says this is a life lesson for Chris too since it will affect him in 20 years. Matt says he doesn’t want him to make the same mistakes he’s made.

Farrah comes to talk to Kiana and takes her outside. Farrah says what happened Friday night. Farrah is in the ridiculous glasses talking to her. Farrah says she needs to open up and figure out how to have things done. Farrah says she can’t have a manager that can’t figure things out.

Kiana says this is ridiculous – be a mature boss. Farrah hassles her and says all the best to you. Kiana walks out annoyed.

Matt and Amber head to Dr Drew’s show to tell their side of the story. Amber says it’s more about Matt and he checks her pupils with his phone and says he knows she’s not doing drugs. They introduce him to Chris and Matt says he hasn’t seem in 10 years.

Chris doesn’t want to be on the set but he’ll be in the audience. The show starts and Dr Drew brings up the pill abuse and the miscarriage. Matt says that article pushed them over the edge. They ask Chris about the things he said about Matt.

Chris says he was on drugs when he said those things. Cate and Tyler prep a party for Butch to celebrate his year of sobriety and being out of jail. Dawn shows up and so does Kris, Tyler’s mom. Butch is there and asks if he forgot the hot dogs. They congratulate Butch.

Butch didn’t even realize they were there celebrating him. Tyler asks if it’s to celebrate it and Butch says it is. Kim says screw Butch, it’s a big deal for Tyler. Jessica, the producer, asks why Butch seems down. He reads a text from his daughter saying he’s finally a father worth looking up to.

Tyler says one year makes up for a lot and says he’s been there more for him in the last year than he has in the last 20. Cate snaps some pics. Bentley gets ready for school and Taylor tells him he won spelling bee in second grade. Maci says he got 2nd place and the trophy says runner up.

Taylor wakes Bentley up for his first day of school. Taylor gets the babies ready while Bentley gets dressed. They head out together and drop the little kids off at preschool first. Then they head off to take Bentley to school. Ryan texts good luck and that he loves him.

Farrah tells Sophia that she fired an employee today. Farrah says she’s happier with the new vibe and says keep calm if you have to hire and fire people. She says people that get fired are hostile. She says she made the right choice today.

Farrah calls Debra and says she’s busy with work. She tells her she fired Kiana. She says Kiana had choice words on her way out. Debra says good help is hard to find. Farrah says if she could hire one of herself, it would be great. Debra says the world would be different if there’s another of her.

Amber and Matt are done with the show and Dr Drew says they got across what they wanted to. Amber says she’ll never get over what the press says. Dr Drew says it’s an addict thing to look at and focus on the negative. Dr Drew says Matt put himself in the middle of this.

Dr Drew says you can’t force anyone to do anything, they have to come to it on their own. He says the ones that go on to treatment by their choice do better. Dr Drew says Chris needs to be in a safe stable environment to make good choices.

Cate works with Nova on her potty training. Butch talks to Tyler about his year with no violations. Tyler says his dad was always a time bomb when he was a kid. Butch says Tyler taught him about unconditional love when he got out of jail. He says it changed his perception of everything.

Tyler says this past year has canceled out a lot of what happened between them. He tells Butch he loves him. Butch is crying. He hugs Tyler. Farrah is at her yogurt shop with Sophia and her dad. Taylor plays with the kids.

Maci goes to pick up Bentley from school. Chris leaves the studio with Matt and Amber.