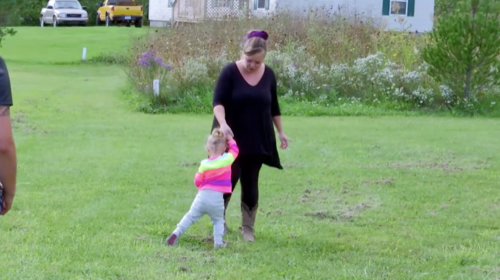 Tonight on MTV Teen Mom OG returns with an all-new Monday, November 21, 2016, episode and we have your Teen Mom OG recap below. On tonight’s Teen Mom OG Season 3 Episode 14, Catelynn and Tyler aren’t ready to move into their new home.

On last week’s Teen Mom OG episode, Farrah and her mom got into a huge fight; Matt was offered the opportunity to write a memoir, but he and Amber were distracted by tabloid stories involving Christopher. Did you watch the episode?  If you missed it we have a full and detailed Teen Mom OG recap from last week, right here!

On tonight’s episode of Teen Mom OG as per the MTV synopsis, “Gary asks Amber for help with Leah when Kristina has a family emergency; Maci gets to know Ryan’s new girlfriend; and Catelynn and Tyler aren’t ready to move into their new home.”

#TeenMomOG starts with Butch playing with Nova and Catelynn opening the invitation to Maci’s wedding. Tyler reads it and says to send the pic saying they’re coming. It’s two weeks away. Next day, Tyler tells Cate they’re f-cked and says the new house has floors buckling.

He says they didn’t put a gap around like they were supposed to. He says he should have hired a general contractor. He says he’s going to hire someone to come in and fix what the others screwed up. Taylor and Bentley go try on their wedding suits. He calls Bentley his mini-best man.

Bentley chooses a bow tie and they get him into a little suit. Maci calms down Maverick and she tells Taylor she wants to invite Ryan and his girlfriend Mackenzie over to the house. Taylor says go ahead and text him to invite him out next weekend.

Gary calls and says Kristina’s daughter is in the hospital and asks if she can pick up Leah from school. He asks about Matt’s son Christopher and she says he’s not home much since he started dating a girl. Gary’s mom Carol stops by and she mentions Kristina’s daughter coming home soon.

Gary says Amber has been helping with Leah. Emilee grabs Gary and Carol laughs. Carol asks about Amber’s depression. She asks if he’d let Leah spend a school night with Amber but he says he wants Leah to have perfect attendance again and says Amber could mess it up.

Farrah is working on stuff in her garage and Heather the producer shows up. Farrah says Sophia is at a play date so she decide to work on her garden. Debra comes out and Farrah starts bossing her around right away. She says Simon is coming to help with the store.

Farrah is awful as usual

Farrah chews her mom out after hitting her in the face with a hedge. Debra says the tree can’t go there and Farrah gets nasty with her. Farrah just keeps on being verbally abusive and won’t listen to her mother at all. Farrah starts cursing at her.

Farrah tells her mother boo hoo and calls her mentally ill. Debra walks away finally after the abuse is too much to take. Debra goes inside and talks to Heather. She says she can’t communicate the way Farrah seems to need. Debra says he wants to help her but doesn’t know what she did to her.

Debra starts crying and says she’s very tired of not being loved. Maci is working on wedding prep and goes with her friend Katie to go try her dress on. She hasn’t tried it on since she was pregnant. Maci says she’s going to invite Ryan and his GF over.

Ryan gets an invite

At Ryan’s house, he tells Mackenzie that Maci invited them over to grill out this weekend. He says it’s weird and Mackenzie says she’s excited to see them all get along. She says she gets the mom aspect of it and says it’ll be good for Bentley. Ryan says he’s glad she’s not pissed.

He says he had other girlfriends think if Maci was nice that he was screwing her. Back to Cate, Tyler is out with his mom Kim for lunch. Kim asks about the house and he tells her about the floors being screwed up. He says they need a front door too then they can move in.

Kim says Cate will be excited. Kim talks to him about jumping into projects that don’t get finished. He says that’s life. She talks to him about his mental health and depression and he says he’s going to therapy. She says don’t focus on Cate so much. He says who knows.

Debra and Simon help Farrah at her store Furnished. Debra talks to two of Farrah’s employees and gives them a test on sales. Farrah has Sophia there too and then Debra asks her about her pricing. Farrah doesn’t get what Debra is saying about labor costs.

Farrah says her mother has overpriced the smaller tables. Debra shows her the calculation. Debra tells her why she priced it and Farrah is awful but not as bad as usual. Amber is feeling down and has gained back weight from her diet. Kerthy asks about her weight goals.

Amber says he wants to lose 40 pounds and talks about trying yoga. She says the judge made her stop doing kick boxing while she was on probation. Leah and Matt go pick up Leah from school. She wants to keep her overnight since Kristina’s kid is in the hospital.

They show up at the school to pick her up. Leah gets in the car and they take off. She tells her she’s going to call Gary about her staying and Leah says she’d love that. Amber tells her to stop picking her nose on camera. They head to a playground and hang out.

Amber says the playground makes her feel fat. Matt pushes them on a swing and then he walks off when he gets a call from Gary. He tells Gary he sounds exhausted. He tells Amber that Kristina is going to stop by and pick Leah up on the way home from the hospital.

Amber doesn’t like it but tells Leah what’s happening and that they have to leave the playground soon. Amber is upset. She walks off and cries and Matt hugs her while Leah swings.

He also needs new siding and he gets the quote on all the work. It’s around $5k for all of it. Cate says it’s not bad and let’s do it so we can move in but Tyler wants to move in. He says he’s $20k over budget but Cate says they have to do it.

Maci and Taylor get ready for the cook out and Ryan and Mackenzie are on the way over. Jaala the producer is there too. Mackenzie comes in with a dish and says hi. Bentley comes down to hang out. Ryan asks for the other babies but they’re out.

Ryan and Maci have dinner

Ryan and Maci get on to Bentley about playing Call of Duty. He fibbed to both of them. They sit down to dinner and Bentley is going home with his dad and GF to spend the night. They tease Bentley about not brushing his teeth. He’s happy to have them all together.

Maci tells Taylor later that Mackenzie was cool and says Bentley seemed so happy to have them all there. Maci says it was awesome. Amber and Matt are in the car with Leah and Kristina is already at the house waiting when they pull up.

Amber goes to give her a hug and asks about her daughter. She gives her a hug and she says Emilee is at home with Gary. Matt says Gary sounds exhausted. Kristina says Gary isn’t used to working that hard. She’s been up since 3:30 am.

She says her ex is doing the night shift and she’s there during the day. Amber kisses Leah and hugs her. Amber tells Leah to be sure and help out Kristina at home and they take off. Amber says it seems like Leah doesn’t want to say I love you in front of Kristina.

Farrah is frustrated with her and her mom bickering when she needs her to help with the store. Farrah leaves Debra at Furnished while she goes to check on FroCo. Simon is also at the furniture store. Next day, Farrah and Debra go get pedicures.

Debra says she needs to go home and get some things done. Farrah chews her out for not helping her. Farrah calls her a liar and Debra says don’t stick a microscope up me. Farrah says she doesn’t trust either of her parents because they both make bad decisions.

Debra cave and does what Farrah wants

Debra says don’t degrade me. Farrah starts cursing at her and says she will find someone else reliable. Debra says she just needed a couple of days to do things and Farrah threatens her. Debra says why does every day have to be this way.

Debra says no one cares about her needing to take care of things, Debra says this is not normal. Farrah says okay. Debra says fine, she’ll stay and help. She gives up and is clearly upset. Farrah glares and gives her the silent treatment.

Nova walks out and Cate says on House Hunters, the renovations always go over. They talk about Butch fixing the other house so they can sell it. Tyler says they can wait on the porch but do the siding now. Cate agrees.

Maci goes for a final fitting on her wedding dress. She says she looks like a ginger Cinderella and all her friends ooh and ah over it. They tell her Taylor will lose it when he sees her. She says Jayde’s dress is just like hers but tiny. She loads the girls into their bridesmaids dresses.

Maci says they all look so pretty and there are tears all around. Debra cleans up at the furniture store. Later, at Farrah’s house, Simon grabs a beer. She talks about her shorter blonde hair. He asks what’s up with her and Debra.

Simon says they need to learn to communicate with each other and not be at each other’s throats in front of other people. He says it’s low class, don’t be that kind of person. Farrah says she’s trying to bring her family up. He says as a businesswoman, she need to be better.

Farrah starts cursing and he says she’s so defensive. He says it’s not just Debra, it’s her too. Farrah talks about therapy and cutting her mom out of her life if it doesn’t work. Matt and Amber sit talking about Leah with Kerthy. Amber is getting a mommy makeover.

Kerthy asks about her depression and Amber talks about being in bed for three weeks straight recently. She says she tried harder when Leah is around but says the depression got so bad she couldn’t see her. She says she’s on new bipolar medication and it’s better but she feels weird.

Amber cries and says she hasn’t felt normal in so long. She says the drugs were here self-medicating and she wishes she had found this out years ago and says a lot of things in her life might not have happened and could have gone in a different direction. She cries some more.