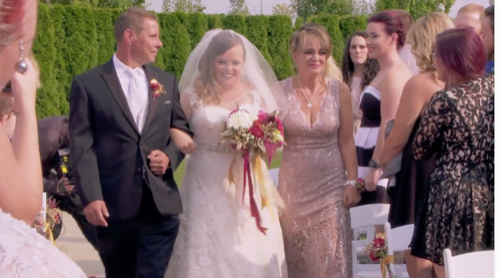 Tonight on MTV their series Teen Mom OG continues with an all new Monday January 25, season 2 episode 5 called “The Big Day” and we have your weekly recap below. On tonight’s episode, Catelynn and Tyler say “I do”; Maci and Taylor buy an online T-shirt business.

On the last episode, Farrah struggled with taking Sophia to visit Derek’s family; Ryan was annoyed that Maci had control over Bentley; and Catelynn dealt with anxiety when Nova met Carly. Did you watch the last episode? If you missed it, we have a full and detailed recap right here for you.

On tonight’s episode as per the MTV synopsis, “Catelynn and Tyler say “I do”; Maci and Taylor buy an online T-shirt business; Amber and Matt decide to flip houses; and Farrah and Debra argue about Debra caring for Sophia.”

Teen Mom Catelynn and Tyler are preparing for their wedding. Tyler heads out to the campsite where his father Butch and brother are staying and they head off to the rehearsal.

Ryan has Bentley for the weekend and Maci and Taylor are discussing Taylor buying a clothing line. Maci worries about the costs of starting up a clothing line and how they are already in debt.

Amber is dropping Leah off at Gary’s house. Matt and Amber decide to start flipping houses. They contact a woman named Charlene who invites them to go out that afternoon and take a look at a house. The house looks completely gutted and Amber asks if there was a fire in the house. Charlene says that she believes that there was. Amber says that the house is too overwhelming for their first house.

Farrah, Sophia and Debra are all in Omaha. Debra wants them all to stay in their family home, but Farrah decides that she and Sophia will stay in a hotel. The fighting begins already as they are in the car and Farrah tells Sophia to stop misbehaving and Debra tells Farrah to leave Sophia alone. Farrah decides to go see her old therapist about the issues that she is having with leaving Sophia in her mom’s care while she is in the UK for work. The therapist tells her that it is the sign of a good parent that “she worries about bringing someone into Sophia’s life because she wants to get it right.”

At Caitlyn and Tyler’s wedding rehearsal dinner there is excitement all around. April asks if Caitlyn is nervous. Tyler is showing pictures of Carly and Tyler’s mom asked how Brandon and Theresa felt about meeting Butch. Tyler said that they were nervous about meeting him. Then she asked how Butch felt about that and Tyler said that he understood. Butch then stood up and made an emotional apology to Tyler for being a “terrible dad and being the man that he was” and the two embraced in a warm hug.

Amber and Matt continue their hunt for the perfect house to flip. They find a house that is in much better condition than the first house they saw and is priced at 31,ooo. They decide to offer 18,000

Farrah decides to get help for Debra watching Sophia. This does not make Debra happy. The argument ensues. Debra tells Farrah that she lost her job in order to watch her and Farrah tells her “not to manipulate her.” She then offers to pay her and Debra tells that it’s not necessary. Farrah asks her if she wants her and Sophia to come over for dinner and Debra says yes.

Amber and Matt get the house. Later that night at home they are discussing the fact that they are taking a big risk by buying this house, flipping it and trying to sell it. They also talk about how they plan to invest the money in a sober living facility.

Catelynn and Tyler enjoy their last few minutes together before they head off their separate ways for their final night as single people. Tyler jokingly tells Catelynn that he can’t be with her and Catelynn laughs and tells him if he didn’t show up she would track him down.

With the photo shoot behind them Maci and Taylor head to the wedding. Maci talks to Taylor about where they want to be a year from now. Taylor says he wants to own a clothing empire so that their kids won’t have to worry about being in debt from school.

Farrah takes Sophia to feed the ducks before they go to have dinner with her mom. Debra talks to Heather, one of the producers of the show, and tells her that she is hurt by Farrah’s actions and she feels that she is being treated like she is “old and can no longer care for her granddaughter when she has done so much for them.” She also tells Heather that everything she has will be Farrah’s when she is gone.

Amber and Catelynn are chatting on the phone as Amber and Matt get ready to head to Michigan and She tells Cate about them buying their first house to flip. Amber and Matt are so excited and she asks him when the last time he danced was.

Catelynn and Tyler are preparing on the day of their wedding. Caitlynn has a mild breakdown when she realizes that the wedding shop has forgotten her veil. She tells her mother that the shop is four and a half hours away and even if they could get there the shop is closed because it is Saturday so April says they will just have to improvise. Thankfully the florist is able to come up with a veil.

The guests begin to arrive and Butch gets to meet the other girls and their children for the first time. Catelynn finally shows her nerves while she is in the room with Theresa. She tells her that they are so proud of her and Catelynn thanks her for coming. Theresa tells her that Carly is so excited to see her.

Farrah and her mom have a tense exchange over dinner. Farrah tells her mom that she is not watching Sophia while she is in London. Debra tells her that Michael can’t watch Sophia and so Farrah calls Michael to make sure that the plans are still in place and he assures her that he will be able to watch Sophia. Sophia leans over and whispers in Farrah’s ear to “just hire a babysitter now.”

Farrah gets angry when Debra says “that’s ok Sophia.” and asks her mom if she is ok with it. Debra tells her no and Farrah tells her not to be passive aggressive with Sophia. Debra responds by telling Farrah that Sophia stuck her tongue out at her.

Wedding preparations continue for Catelynn and Tyler. Butch talks about how he felt missing Tyler’s college graduation and worrying that he was going to miss his wedding day. Everyone gathers for the ceremony and Carly walks down the aisle as the flower girl. As Caitlynn walks down the aisle on her mom and dad’s arm she is crying and the ceremony begins. They exchange vows they have written themselves and tears as well. Everyone in the audience is crying as Tyler speaks his vows talking about how he has loved her since middle school and he would love her for the rest of his life. He also talked about how he believed that she was put on this earth to be loved by him. Catelynn says that she can’t top his and the two exchange rings and are pronounced husband and wife.

At the reception Butch meets Carly without telling her who he is. Matt and Taylor are talking after the ceremony and Matt asks if the wedding makes Taylor want to get married. He says yes and Matt asks him if he is afraid. Taylor says it is a little late for that. Matt tells him to do it from the heart. There were toasts from Tyler’s and Catelynn’s sister’s and Tyler’s mom who said she “felt like she had another daughter.”

Farrah and Debra are still arguing about the issues with Sophia. Heather is trying to mediate. Farrah decides to leave rather than to create another scene with her mother. She asks her mother what she is pissed about and Debra tells her she is “not pissed, she’s hurt.” Debra tries to kiss Sophia goodbye and Sophia pushes her away.

There is a special dance just for Catelynn, Brandon, Theresa, Tyler and Nova. Then the party Kicks into high gear. Finally all of the girls get a little alone time together to talk about the wedding. Maci asks if the dance with Carly was planned and Catelynn says no and then tells them that she told Carly to ask Theresa about it. The girls all commented on how awesome it was that she and Tyler had chosen the perfect parents for Carly. The wedding party released balloons with candles inside before Cate and Tyler went off to start their honeymoon.