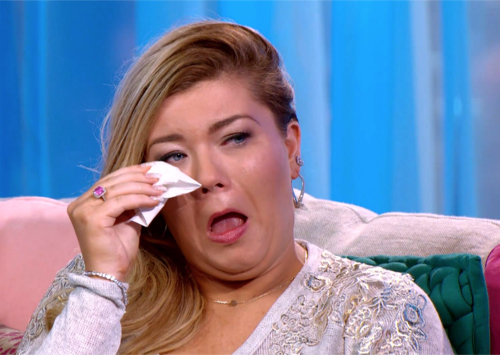 Tonight on MTV their series Teen Mom OG continues with an all new Monday February 1, season 2 episode 6 called “Skeletons in the Closet” and we have your weekly recap below. On tonight’s episode, Before leaving on a month-long business trip, Farrah has a last-minute change of heart on who should watch Sophia.

On the last episode, Catelynn and Tyler say “I do”; Maci and Taylor bought an online T-shirt business; Amber and Matt decided to flip houses; and Farrah and Debra argued about Debra caring for Sophia. Did you watch the last episode? If you missed it, we have a full and detailed recap right here for you.

On tonight’s episode as per the MTV synopsis, “before leaving on a month-long business trip, Farrah has a last-minute change of heart on who should watch Sophia; Maci and Ryan celebrate Bentley’s birthday; Catelynn has post-wedding depression.”

On this weeks episode of Teen Mom OG Tyler’s mom and dad are at the house with the newlyweds and they are discussing the future. Kim is frustrated because Nova is not there and with Cate’s mom Apryl. They are arguing about what Tyler wants to do with his future.

Farrah is getting ready to leave on her business trip to the UK. Michael and Farrah discuss talking to Debra and Michael tells Farrah to be nice. When Farrah gets Debra on the phone she asks her mother when she is leaving and Debra tells her that she does not have a return trip booked. This upsets Farrah and she tells Debra that she is not allowed to stay at her house and her dad will be the one to watch Sophia. Fedarrah also tells her mom that she needs to leave from her visit the same day that Farrah leaves for the UK.

Maci and Taylor plan for Bentley’s birthday while dealing with new pets in the house. Maci asks Taylor if he is ready for the party and he tells her that he is. She wonders if Ryan will show up and says that it will be easier this year because he doesn’t have a girlfriend.

Amber and Matt continue to work on the house they bought to flip. Amber talks to a couple of her girlfriends about her relationship with Matt. One of them asks if it was hard for Matt to move. Amber tells them that it was and that she has met his son and daughter.

Gary is doing research on Matt and discovers that he allegedly has five court cases for seven children and he and Christina discuss this. Gary decides to wait until he sees Amber without Matt around to tell her the information that he has discovered. Gary worries about Matt being a “parent” to Leah when he can’t parent and care for his own children.

Ryan’s mom asked how things are with Maci and he tells her that they got into a fight. When Maci drops Bentley off Ryan asks about Bentley’s birthday party and she tells him that they are going bowling. Maci doesn’t want to take Jade to the wedding so Ryan’s mom offers to watch her.

Farrah worries that her mom and dad are plotting behind her back. She tells Michael that Debra is not to stay at the house while she is gone and she lets Michael know that under no circumstances is Debra to stay at the house. She also questions if maybe she should hire a sitter and not let either of her parents watch Sophia. Michael tells her that “while he wishes Debra were staying at the house while she was gone he will respect her wishes and that no one is plotting behind her back.”

Catelynn and Tyler are talking to Jessica, one of the producers. He then sits down and talks to his mom who tells him that if he sees himself writing a book then he needs to sit down and do it. Then she turns the conversation to why Nova is never at home and asks if Catelynn is suffering from some sort of postpartum depression.

Amber, Matt and Leah go to look at venues for their upcoming wedding. Gary goes to see his lawyer and presents the information that he found to his attorney. Gary wonders if he should say anything to her and the attorney tells him that he should and see what Amber has to say.

At Bentley’s birthday party Ryan shows up on time. He actually holds Maci’s daughter Jade. Maci, Taylor and Ryan watch as Bentley opens his presents and they have cake. Maci’s mom comments on how well everyone is getting along and Maci says that it’s because Ryan doesn’t have a girlfriend. They take family pictures.

Things are tense when Farrah’s mom comes to visit and when Farrah asks Sophia who she wants to watch her she tells her mother that she wants both her grandma and grandpa to watch her. Farrah feels conflicted so she calls her therapist who comes to the house and tells Farrah that since she is choosing to leave she is giving up some of the control she has. The therapist tells her that her parents love and support her and points out that her parents have sacrificed jobs to move across the country and support her. After thinking it over for a few minutes Farrah decides to allow both Debra and Michael to watch Sophia while she is gone.

Catelynn and Tyler are having a discussion about Nova being gone so much of the time. He tells her that he talked to his mom about the situation and Catelynn tells him that Kim needs to mind her own business. Tyler wonders if Cate is suffering from postpartum and tells her he wants her to come to therapy with him. Catelynn says it is not that serious.

Amber and Matt are headed to drop Leah back off at Gary’s. When they get there Gary is waiting outside and asks her if she knows how many kids Matt has. He tells her that he has seven kids by five women all of whom are coming after him for child support. Amber gets angry and tells Gary that “he should have come and talked to her and Matt privately before he went ahead and exposed this in front of the cameras. “ Amber rages that she wants to go home and Matt tells her that everything is all right.

Amber and Matt get angry when they get home and start destroying the cameras. He tells the producers to “get their stuff and get out of his house.” Matt tells her that the information Gary found is not true.

Catelynn and Tyler go to see the counselor while Butch watches the baby. Tyler asks the counselor how many days the baby should be away from them and tells her that their parents are asking too many questions. The counselor asks what they would do if the grandparents lived further away. She tells them that two times a week is fine, but anymore than that could be an issue” Tyler worries that he is not doing enough to help out with Nova and asks what Catelynn needs from him.

Matt and Amber sit down to address the situation with Gary. Amber worries that if the information is true she will end up looking stupid. She says that “She just wants her kid and just wants to be happy.”