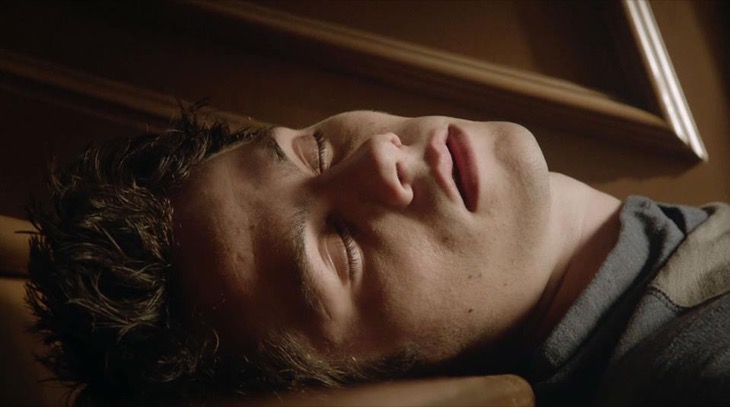 On the last episode, Scott argued that Hayden was weak and will die if he bit her. The pack enlisted Melissa to treat Hayden at the vet clinic, while Lydia discovered that Parrish was a hellhound. Theo locked Malia up at the hospital, and then abducted and injuresdSheriff Stilinski. Scott went to the school, where Theo trapped him with mountain ash and revealed that he was the first Chimera, and Scott foundthat Theo was poisoning him. Did you watch the last episode? If you missed it, we have a full and detailed recap right here for you.

On tonight’s episode per the MTV synopsis “in the Season 5 winter premiere, Scott and Stiles struggle to put aside their differences to find the cause of the sheriff’s infection before it kills him”

Tonight’s episode is going to be really interesting. You’re not going to want to miss even a minute of this exciting season 5 episode 11! We will be live blogging TEEN WOLF on MTV beginning at 10 PM EST. How excited are you for the upcoming episode of Teen Wolf? Who’s your favorite character so far? There’s just no way of knowing if complications will arise further down the line as a result of past events? Sound off in the comments down below and let us know your thoughts!

Lydia is wading through the water. A voice says, “Tell me where you are, tell me what you see?” She’s proceeding through her vision. Turns out that Lydia is in Eichen House with Dr. Valack, the doctor who had the third eye of sorts. He leads her through the vision, asking her WHY Theo killed her sister. Lydia proceeds through the vision, asking briefly what Dr. Valack has done to her, to which he responds, “I’ve amplified your powers, which just might help save your friends.”

Eventually, Lydia says that Theo killed his sister for her heart. Theo wanted his sister’s heart for a transplant – to make him a genetic chimera and viable for the Dread Doctors’ experiments. Dr. Valack wonders why the doctors would’ve chosen a mere ten-year-old boy willing to kill his sister to become a chimera. Lydia wonders why he cares so badly. He says that there’s a reason why their methods and experiments suddenly started to succeed – and it all starts with Theo.

A nightguard is walking outside Eichen House when he’s attacked by a chimera. Soon, Theo and his little band of chimeras infiltrate Eichen House. Theo says that they have come for Lydia Martin.

Meanwhile, Sheriff Stilinski is being wheeled into the hospital. Stiles is shaken up.

Scott is at home tending to his own wounds, and still quite frustrated with how everything played out. He grabs his motorcycle helmet and walks down the hallway when, all of the sudden, he grows woozy. He collapses.

Parrish takes a shower and washes the ash from his body. Lydia is in there with him – but we know Lydia is really in Eichen House. Lydia says, “Don’t you know what you are? You are a harbinger of death.” Parrish wakes up from this dream-like state. He’s driving in a truck and swerves to avoid hitting an oncoming car. He immediately calls the police station. Deputy Clark answers. Frantically, he tells her that Lydia Martin is missing. Someone needs to find her. He goes out searching. Parrish goes out looking in the woods.

At the hospital, Melissa tells Stiles that his father is doing well. He’s going to be just fine.

Scott is knocked out on the floor. Parrish’s voice wakes him up. Parrish says that he needs his help. Scott asks with what?

At the end of the hallway stands Lydia, cold and frozen – but upright. Parrish says that he found her, practically hypothermic, lying in the woods. He also found a bloody Sheriff’s badge. Scott says that this is a warning.

Before commercial, we see Sheriff Stilinski resting in his hospital bed.

Liam tries to tell Hayden’s sister about Hayden, but Mason grabs him. He stops him from doing anything irrational and reckless. However, soon, Liam has this intense feeling that Hayden’s still alive.

Parrish and Scott rush Lydia to the hospital. Scott sneaks down to see what’s going on with Stiles’ dad. Melissa and the doctor say that they don’t know what’s wrong with him at the moment – but his condition isn’t improving. Stiles sees Scott in the hall and flips out on him. He’s mad because he didn’t protect his dad. Scott tells him that Lydia got hurt.

Stiles goes to visit Lydia in her room, but Lydia’s mom freaks out on Stiles and forbids him from seeing her. Stiles tells her to check the back of Lydia’s neck – he thinks he knows who did this.

After Lydia’s mom calms down, she walks over to Lydia and checks the back of her neck. There are claw marks. The gang knows that Theo is responsible – he went “digging through her mind.” They say that they need to go find him, that maybe he’ll know of a way to save Sheriff Stilinski. Nobody, especially Melissa, thinks that this is a good idea. But they all deem this as the appropriate action to take and ask how to find him. Stiles says, “He’ll come to me.”

Theo arrives in front of Stiles.

Meanwhile, Natalie Martin (mother) signs the psychiatric release forms to send Lydia to Eichen House. The doctor informs her that it is “a very different place now.” Parrish runs in asking her what she just did.

Scott is upstairs listening in on their conversation. Theo says that he knows what’s coming, he knows what the Dread Doctors have created, and she knows what Parrish is.

Scott and Stiles deduce that it was probably another chimera who attacked Sheriff Stilinski – and that’s why he’s so sick now.

Meanwhile, Mason and Liam are still on their hunt for Hayden.

Stiles gets in his car and locks out Scott. Eventually, he caves, and he accepts Scott’s help.

Liam and Mason revisit the library. They are trying to figure out how to find the Nematon.

Dr. Valack transports Lydia to Eichen House. The orderly driving says that she’s a “pretty little thing.” The doctor says, “That ‘pretty little’ thing could shatter your skull with her voice if somebody taught her how.”

Liam and Mason aren’t having much luck finding the Nematon. Mason has a spark of brilliance and says that maybe Liam should try looking with his wolf eyes to find the tree since it’s a beacon for supernatural creatures.

Maria helps Stiles and Scott find the missing kid – Noah, who might be responsible for the attack on Sheriff Stilinski. She’s a great tracker, but she doesn’t want to talk about how she broke up with Stiles – or anything else. She has the boy’s scent.

Meanwhile, Liam and Mason look at the Nematon. Soon, cops show up. They’re led by Hayden. She says, “That’s it. That’s where I found the bodies.”

In the tunnels, they continue to look for Noah. They find him. But they also find the Dread Doctors. They approach.

Scott tells Stiles to leave with Noah and to get to the hospital. Maria and Scott try to distract the Dread Doctors. Malia says that they are going to die down here. Scott says that they aren’t. He called someone else to help. Chris Argent shows up. He fires at the doctors but they their tools stop the bullets in their paths.

As Stiles and Noah run out of the tunnels, Noah transforms to break through a locked door. Stiles notices that one of his bone claws, which extends from his arm, has been broken and splintered.

Meanwhile, at the hospital, after obviously receiving news from Stiles, Melissa tells the doc to open up Sheriff Stilinski and to look for a piece of bone marrow – as that’s what’s poisoning him. He does as he’s instructed, locates the splintered bone material, and Sheriff S soon finds his way to recovery.

We see Noah frothing at the mouth with mercury. He’s dying. The Dread Doctors come for him.

Theo and his crew come for Lydia. Dr. Valeck says that they shouldn’t take her, that the Dread Doctors have no idea how important she is yet.

Theo says that he doesn’t necessarily want Lydia – but what he is looking for is a Hellhound.

Parrish, flaming and scary, breaks down the door.