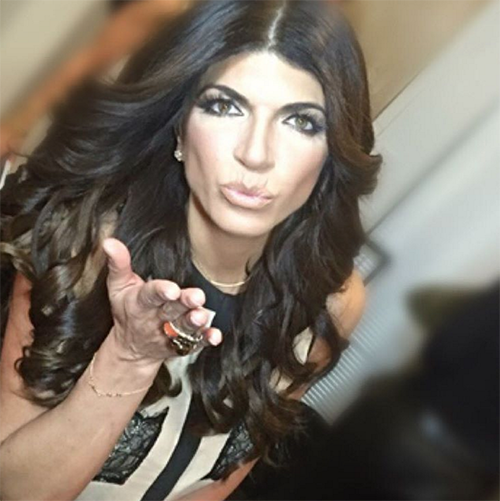 Teresa Giudice didn’t waste any time getting back to baby-making after being released from prison – if the buzz is true. Is Teresa prepared for life as a single mother with a new baby? If Tre is pregnant, then Joe Giudice will be behind bars when the little one arrives.

Life & Style has sources that shared Teresa’s happy news, but it’s all supposed to be very hush-hush right now. It’s never been a secret that Joe wants a son, but is now the right time for the Giudices to expand their family? Will it ever be a good time for the Teresa and Joe to add another family member?

Joe’s headed to a federal correctional facility in March and the convicted felon will be there for 41 months – that’s about three-and-a-half years. If Tre was able to get pregnant the very second she arrived home, then baby number five would arrive sometime in September or November.

Is Teresa going to haul four kids and an infant back and forth to visit Joe in prison? It’s highly unlikely that Giudice is pregnant. How in the world is it possible Teresa could conceive within days – could have been hours – after arriving home just in time for Christmas?

This is the same woman who reportedly underwent in vitro fertilization treatments in order to conceive Audrianna – Giudice daughter number four. If you think back, there was somewhere in the neighborhood of $12,000 owed to the fertility clinic where Joe Giudice and Teresa Giudice got a little assistance conceiving.

Why would Teresa want to get pregnant with another one of Joe’s children? The entire time Tre was in prison there were reports Joe was cheating on the reality television star with an assortment of women. Joe was allegedly cheating on Teresa long before she began serving time on multiple counts of fraud.

Let’s not forget, when Joe Giudice gets out of prison he might get deported to Italy. Joe is under the impression than no matter where he ends up, Teresa Giudice and the family will follow. So Tre is going to uproot three teenage girls, a preteen, and a toddler and move them from New Jersey to Italy?