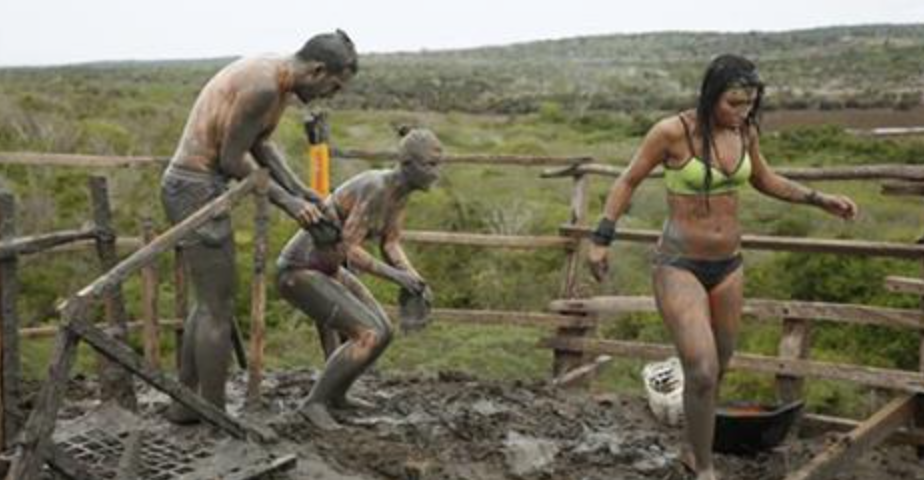 Tonight on CBS the Emmy award winning show The Amazing Race hosted by Phil Keoghan returns in an all new Friday February 19, season 28 episode 2 called Get in “You Look Like Gollum.” and we have your recap below. On tonight’s episode, the race continues in Cartagena, Colombia.

In the last episode, 11 new teams of social media starred depart from their own homes all across the country and head for Mexico City, where they set off fireworks and dig deep at an archaeological Roadblock. Did you watch the last episode? If you missed it we have you covered with a full and detailed recap right here for you.

On tonight’s episode as per the CBS synopsis, “for the first time ever, the Race travels to Colombia where Racers go mud-diving for emeralds in a volcano.”

#AmazingRace starts in Mexico City and Dana and Matt are first to leave – they are told to go to Cartagena, Columbia – the first time the Amazing Race has gone to this country. They have to go to Totumo. The engaged couple heads out in a cab.

Tyler and Korey leave right behind them. They talk about how competitive they are and how athletic they are. Zach and Rachel are in third. Zach says he’s dependent on his phone and it’s strange to not be connected. Rachel says she’s excited to have his attention.

Burnie and Ashley leave in sixth. The teams head to the airport. Brittany and Jessica leave in seventh. Sheri and Cole are ninth. Erin and Joslyn are tenth. Scott and Blair are last and know they will face a speedbump.

The first flight touches down with several teams on it. Five make it on the second flight. The third flight gets in at 10 am and Darius and Cameron are on the last flight. All arrive within an hour of each other. In Cartagena, the plane lands and the race is on.

They get their #Roadblock clue and are at Totumo, near a volcano. They submerge in mud then dig for an emerald to get their next clue. Brodie heads up into the mud volcano and says it’s a #HotMess. He gets in and then he ducks under.

Brodie gets an emerald before the second person gets there. Dana is in the water now and not happy. Brodie runs for the clue box in the water. He hands over the emerald and runs out to clean off and get the clue. Dana is still searching.

Burnie and Ashley show up and Ashley decides to try it. Korey is doing it for his team. Brodie gets their clue and he and Kurt are in first. They have to head out to a new place. Dana has to go back up because she didn’t get the right thing. Ashley gets a blue stone but needs an emerald.

Korey gets one and heads down but drops the emerald. Tyler says he looks like Gollum looking for the ring. Dana finally gets one and so does Ashley. Korey lost his and has to try again. The next flight lands and the teams head out in a hurry.

The third flight was delayed 10 minutes so that team is delayed. Darius and Cameron are off the last flight nearly the same time. A slow cab fouls up one team. The fifth through seventh teams show up at the volcano.

Marty and Hagan are frustrated by their sow cab and Darius and Cameron make up time. Brodie and Kurt make it to the #Detour. They choose Pop-Up where they build a shelter from materials on the beach or they can do Parrilla where they have to make food.

Phil greets the teams on the beach as they start their shelter building. Cole gets an emerald and heads down excitedly. Britt got one too. Joslyn screams in joy when Erin gets one. Marty and Hagan make it to the volcano moments before Darius and Cameron.

Dana and Matt’s shelter gets a thumbs down. Brodie and Kurt call the guy over to check them. They are also told no good. Theirs is too tall. Tyler and Korey get the thumbs up and now they head to Plaza Bolivar which is the pit stop for this leg. They head out in first.

Cameron finds the stone and heads to get the clue out in the water. Marty is freaking out while Hagan still searches for the emerald. Darius and Cameron leave in their cab. Hagan keeps finding the wrong color stone.

Zach and Rachel make it to the beach. Scott and Blair still have to face their speed bump. Brodie and Kurt get thumbs up and head out in second place. Erin and Joslyn are doing the food challenge. Hagan is still in the volcano.

Phil says the speed bump for Scott and Blair is to pull in a fishing net and grab the catch of the day. The net is huge. Brittany and Jessica are also cooking. Dana is frustrated because she and Matt set up all their poles facing the wrong way. He wants to turn it but she says they have to dig them up.

They are arguing loudly. Burnie and Ashley get thumbs up and that puts them in third place. At the plaza, Tyler and Korey meet Phil at the pit stop. They are thrilled to be in first place and he says they won a trip to St Thomas.

Hagan finally gets an emerald and they head out. Blair squeals as she has to pick up fish. They pass the speed bump in ninth place and then decide to cook. Darius and Cameron miss the clue box. Brodie and Kurt check in for second place.

Dana and Matt run to check in and found out they’re in fourth place. Marty and Hagan decide to cook. Darius and Cameron also decide to cook. Scott and Blair are told the fish are no good and have to try again. Brittany and Jessica get thumbs up and leave in fifth place.

Erin and Joslyn are in sixth place as they take off. Marty and Hagan are cooking. Zach and Rachel get thumbs up on their shelter and leave in seventh. Scott and Blair try again and get thumbs up to put them in ninth place.

Darius and Cameron are struggling to cook. Erin and Joslyn check in for fifth place just beating out Zach and Rachel and Brittany and Jessica in sixth and seventh place. Sheri and Cole take eighth place. Marty and Hagan get thumbs on their fish which puts Darius and Cameron in last.

But now Marty and Hagan have to run back to their can which is quite a ways away. Scott and Blair are thrilled to check in at ninth. Darius and Cameron get thumbs up and hop into their cab. They see Marty and Hagan running down the road and pass them by.

The guys are thrilled. Hagan says that’s it, they just lost the race. They sure did. Darius and Cameron check in and that’s it.