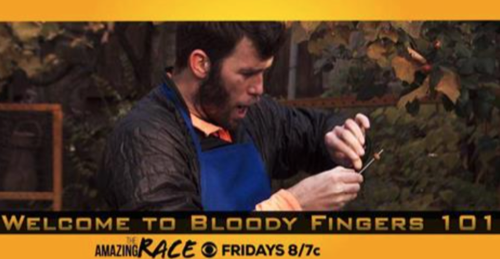 Tonight on CBS the Emmy award winning show The Amazing Race hosted by Phil Keoghan returns in an all new Friday April 8 season 28 episode 7 called Get in “Welcome to Bloody Fingers 101.” and we have your recap below. On tonight’s episode, the race continues in Tbilisi, Georgia, where teams learn to make a traditional candy and go deep into the trenches at an old Georgian winery.

In the last episode, the race reached new heights as teams climb 15,000 feet in the French Alps, and one team was in jeopardy of elimination after dropping their clue down a mountain.  Did you watch the last episode? If you missed it we have you covered with a full and detailed recap right here for you.

On tonight’s episode as per the CBS synopsis, “teams travel to the country of Georgia where they learn how to make a traditional candy and go deep into the trenches at an old Georgian winery.”

This week on The Amazing Race the teams arrive in Georgia and head to Freedom Square in Tibillis, The capital of Georgia to get their next clue. The first team to find the clue Tyler and Korey. They are told to make their way to the Narikila Fortress to search for their next clue. Tyler and Korey admire the scenery as they are riding through the town. They are the first to arrive in the Square followed by Brodie and Kurt. Brodie says “Number two ain’t bad.” Dana and Matt are third, but decide to get out and walk the rest of the way. Blair and Sean are the last team to arrive. The cabbie tells them that they have to get out because the cab can’t go any further. Blair complains about the walk saying “My back hurts.”

When Brodie and Kurt reach the top of the Gondola they find a clue that tells them they have to make their way past the river to the Jovari Monestary. They were going to walk until they found out it would take thirty minutes for them to get there on foot. They then decide to take a cab. Tyler and Korey reach the top of the mountain first and they get first choice as to whether they want to learn about making wine or making candy. They decide to make candy. Next to show up is Brodie and Kurt. They also decide to make candy. Zach and Rachel are third and they also decide to make candy. The teams are watching a native work and make the candy and Brodie says “There is a language barrier here so I am having a little trouble.” Tyler and Korey are struggling with the needle and getting it through the hazel nuts.

The final teams arrive with Scott and Blair bringing up the rear. When they arrive all of the candy making stations are full and they have to wait. Blair tells Scott “Let’s go back to our taxi.” As they are walking back she says “We are screwed, majorly screwed.” Dana and Matt decide to switch and learn about the wine. When Scott and Blair see this they decide to stay and take their spot.

Sherri and Cole are already at the wine station working on cleaning the wine bottles and glasses. Back at the candy making center everyone is struggling to get the nuts through the nuts. Brodie and Kurt finish their five strings first. However one of the stings is not up to standard and they only have one good string and they have to start over on the other four.

Meanwhile at the theatre the teams are watching the dancers to pick up the choreography. Burnie and Ashley are the first to go and after going to early on the first attempt, they nail it on the second attempt. Kurt and Brody perform next and Kurt really strugges on the dance. Finally Brody and Kurt are able to complete the task and move on. Meanwhile Burnie and Ashley are moving on to the park, but they end up in the wrong park. Dana and Matt nail the dance while Zach and Rachel finally find the right park and are told that they are team number one. Right behind them are Burnie and Ashley followed by Korey and Scott finally nail the dance and head off. Scott and Blair are next to go and Scott worries about the tempo. Sherri and Cole arrive at the park. Scott is frustrated and struggling to finish and the race comes down to the final two teams; Scott and Korey and Ashley and Scott. Scott nails it and they head off to the park. Tyler and Korey finally complete the dance, but Tyler’s bag comes up missing. Ashley discovers that Scott took the wrong bag and he has to run it back to them. He apologizes and the race is on to the park. Korey and Tyler just barely beat out Scott and Blair and they are eliminated.

This week on Hell’s kitchen the chefs are about to be surprised by the arrival of their family members. Chef Scott comes upstairs and tells the chefs wrap up the visit. The chefs head downstairs and Chef shows them the black jacket. Chef Ramsey brings out the family members and All of the chefs open their gift boxes to find strait jackets. Chef tells them that for their next challenge they will be teaching their family members to make one of his signature dishes while they are trapped in the strait jacket. Ashley says “I’m very confidant with my dad as my partner because he owns a restaurant back home. Meanwhile Ariel is struggling to get her mom to follow directions. Jared tells his mom “Please just don’t stab you or me.” He says “I definitely don’t feel safe with my mom in the kitchen.”

As a reward the red team gets to head off to the spa for a full day of treatment. As punishment the blue team has to clean the dorm. Jared says “I don’t know what to throw away. There is long hair and Mascara everywhere.” Manda says “All things considered it is not as bad as it could be. The guys are definitely a lot messier than the girls.” Jared shakes his head and says “I don’t think so. “