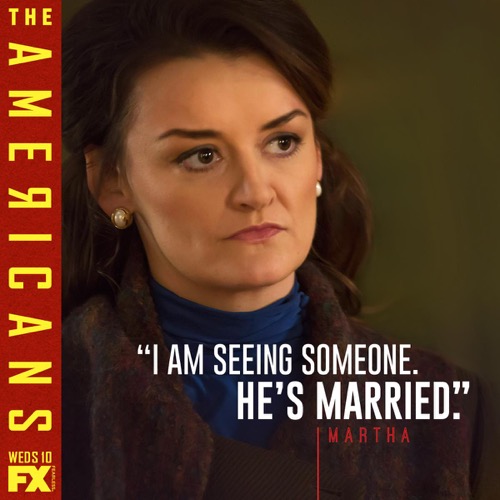 Tonight on FX The Americans airs with another all new Wednesday, April 13 season 4 episode 4 called “Clark’s Place,” and we have your weekly recap below. On tonight’s episode, Philip (Matthew Rhys) faces a tough choice that will drastically impact him and Martha. (Alison Wright)

On the last episode Philip tried with increasing desperation to get rid of a sensitive and dangerous package as family tensions in the Jennings House reach a boiling point when Paige shared a secret of her own. Did you watch last week’s episode? If you missed it we have a full and detailed recap, right here for your enjoyment.

On tonight’s episode per the FX synopsis “Philip must consider his life with Martha and make a crushing choice from which there is no coming back.”

Tonight’s episode looks like it is going to be a great and you won’t want to miss it, so be sure to tune in for our live coverage of FX’s “The Americans” Season 4 episode 4 – at 10 PM EST!

Tonight’s episode of The Americans kicks off with Martha at home alone. Philip/Clarke finally arrives, he apologizes for not taking her phone calls for the last two days. He tries to explain that he had an emergency with one of his colleagues. Martha says that things are fishy at the FBI, Aderholt took her out to dinner and Agent Gaad noticed that the counters were off on the Xerox machine.

Martha gets emotional and says she had to go to her doctor because she had a panic attack – now she is on Valium. He gives her a piece of paper and tells her to memorize the number – he explains an operator will answer but she will be able to get in contact with him if he is ever MIA again.

At home Paige wakes her mom up in the middle of the night. Paige is upset, she is tired of everything being so weird. She tells her mom that Stan was being nosey when they were gone and was asking a ton of questions about where they were. Paige demands to know where her parents were all weekend. Elizabeth tells Paige that they have told her enough – she obviously isn’t taking the news that her parents are spies well, and it is time for them to take a break from being so honest. As you can imagine, Paige is not thrilled that her mother isn’t giving her any answers.

Oleg still doesn’t know that Nina is dead – he learns that she was executed by the Soviets for treason. Oleg blames his father, he accuses him of letting his brother die too. Oleg’s father lashes out and tells Oleg his brother died for his country – he tells him to go back to America to his fancy clothes and lavish lifestyle.

Philip takes Elizabeth aside and tells her that the FBI is suspicious about Martha. He is going to have someone keep an eye on her and make sure that she isn’t being followed. Elizabeth says they have bigger problems – Stan was snooping around and asking the kids about why they were out of town. Eizabeth says he needs to make up with him ASAP.

Aderholt fills Stan in on his date with Martha. Aderholt thinks that she is up to something – but it’s not what they think. The reason that Martha has been acting so strange is because she is having an affair with a married man.

Oleg and his father attend Nina’s funeral service. They all say their respects as her casket is lowered in to the ground. Oleg’s father takes out a gun and fires three shots in to the sky.

Elizabeth gets home and Paige and Philip are watching the news. Paige tries to run upstairs, she is giving her mom the cold shoulder. Philip stops her and tells Paige that he and Elizabeth are getting ready to leave and go talk to Pastor Tim. They promise to tell Paige everything they say when they get home.

Philip and Elizabeth head home and tell Paige that they explained to Tim and Alice that they work to help people, not hurt them. But, in order to ensure that Pastor Tim bought their speal – they need Paige to make up with him and act like she trusts him again. Paige says she is going to bed, and doesn’t seem too thrilled by the idea.

Oleg heads back to America, and visits Arkady. He tells him that Nina was executed because the Soviets said that she “interfered with something.” But, his father couldn’t get any more information. Arkady isn’t too sympathetic. He tells Oleg that they don’t execute people for no reason, and Nina had multiple chances. Oleg doesn’t like what he has to say and storms out.

One of Philip’s guys are tailing Martha – and they realize that they are not the only ones, they spot an FBI car following Martha as well (it’s Aderholt). He calls and tells Philip that Martha’s being followed. Meanwhile, Martha heads home to but Clark is not there. When he heard that Martha was being followed he ran out the basement so that Aderholt didn’t spot him coming out the front door. Martha is worried when she realizes that Philip/Clark too the only picture she has of them together with him.

Henry is over at Stan’s house hanging out with his son Matthew. Philip uses the opportunity to head over and talk to Stan. They have a heart to heart and Philip reassures him that he would never do anything with Sandra. He even takes it a step further and tells Stan that Sandra felt guilty about the way that things had ended.

Aderholt picks Stan up for work, and Stan introduces him to Philip. Elizabeth watches from across the street. When Philip returns she tells him that Aderholt is the same guy that she got in a fight with over the task force list. Philip is stressed – Aderholt is also the same guy that took Martha out on a date. The FBI is getting way too close for comfort. Things get awkward, Elizabeth can tell that Philip is warried about Martha. She reassures him, and then seduces him.

Tonight’s episode ends with Aderholt and Stan sitting outside of Martha’s house doing surveillance, while she lays upstairs in bed, unable to sleep.