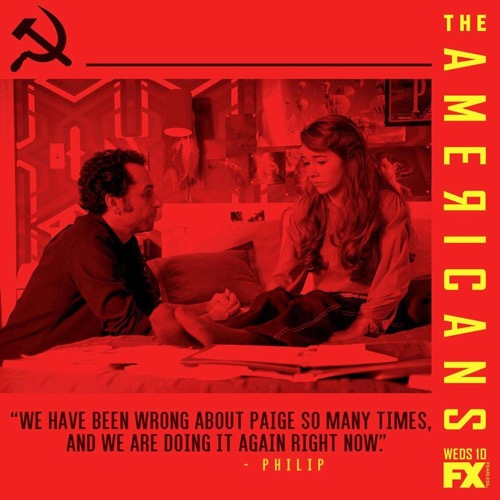 Tonight on FX The Americans airs with another all new Wednesday, April 6 season 4 episode 4 called “Chloramphenicol,” and we have your weekly recap below. On tonight’s episode, Patriotism is tested after a flaw during a mission puts Philip; (Matthew Rhys) Elizabeth; (Keri Russell) William. (Dylan Baker)

On the last episode Philip tried with increasing desperation to get rid of a sensitive and dangerous package as family tensions in the Jennings House reach a boiling point when Paige shared a secret of her own. Did you watch last week’s episode? If you missed it we have a full and detailed recap, right here for your enjoyment.

On tonight’s episode per the FX synopsis “a devastating flaw during a mission forces Philip, Elizabeth, William, and Gabriel to confront the depths of their patriotism… and their mortality. In Russia, in striving to be a better person, has Nina put her life on the line?”

Tonight’s episode looks like it is going to be a great and you won’t want to miss it, so be sure to tune in for our live coverage of FX’s “The Americans” Season 4 episode 4– at 10 PM EST!

Tonight’s episode of The Americans kicks off with Elizabeth and Phillip in the street, they haven’t been home since they were possibly infected by Gabriel. Elizabeth uses a payphone to call Paige at home. She tells her that something has come up with “work” and they won’t be home for a few days – she has to take care of her brother Henry.

Paige gets hysterical, she thinks that something has happened because she told Pastor Tim their secret. Elizabeth tries to reassure her that everything is fine. After Elizabeth hands up the phone, William cuts the wire and takes the phone right out of the booth – in case Elizabeth contaminated it, so that the virus isn’t passed on to anyone else.

Stan has no idea that Philip and Elizabeth are gone. Her son Henry stops by their house to get some milk – apparently they are out at his house. Henry asks Stan for some girl advice, he is still hung up on his science teacher and trying to figure out how to make a move on her. He asks Stan about the first time that he met his ex-wife Sandra.

Henry tells Stan that he has to go catch the bus because his parents are out of town. Stan is suspicious – he tells Henry he will give him a ride, then he heads over to Phiip and Elizabeth’s house and questions Paige about where her parents are. She lies and says they had to take an emergency trip to NY, she is stuttering and it doesn’t seem like Stan is really buying it.

Meanwhile, Elizabeth and Philip are still in quarantine with Gabriel. Elizabeth isn’t in the most positive mood. She is scared that they will lose Paige – but they have no choice, they are going to have to take care of Pastor Tim.

Martha heads to work, Aderholt follows her to her desk and tries to talk to Martha about what happened to Gene. She changes the subject and excuses herself – she has a lot o work to do. Aderholt asks Martha out for a dinner date later that night, and she accepts his invitation.

Back at the quarantine, Elizabeth and Philip are getting their next rounds of shots. Elizabeth won’t eat – she confesses to Philip and William that she feels a little dizzy. Philip freaks out, William says that she may have caught the virus, or she could just be having a reaction to the treatments that they gave her for the virus. They are going to have to wait and see.

Later, Philip finds Elizabeth throwing up violently in the bathroom. He tries to comfort her and tell her that she might not have the virus, it could still be the atibiotics making her sick. Elizabeth tells Philip that if something happens to her, and she doesn’t make it, she wants him to take care of Tim and his wife Alice and then just blame it all on her. Then, Philip can raise the kids as Americans and put all of this behind him.

Martha heads out to dinner with Aderholt. She left Clark/Philip a bunch of messages asking him if she should go on the date – but he never answered her. While Martha is out to dinner, Stan sneaks in to her apartment to search it. Martha was totally played by the two of them. Stan starts snapping dozens of photographs and he takes apart her dresser, he finds her tiny gun stashed in one of the drawers.

At Gabriel’s apartment, Elizabeth’s health is declining. She is having flashbacks to her childhood and her mother, and sweating buckets of sweat. She wakes up in the middle of the night to call Paige, but Philip won’t let her. She’s acting irrational – but Philip convinces her to lie back down. ]

Nina is still in prison – and she has been declared a traitor. Oleg hasn’t forgotten about her though – he has been working hard to try and get her freed, and paying several different politicians a visit. He pleads with his dad to help him get Nina back before she is punished for treason. He finally manages to cut a deal.

In the morning Elizabeth’s fever breaks – William checks her out and says that she never had the disease, just a horrible reaction to the drugs. It looks like Gabriel is going to pull through. William volunteers to stay with him for a few more days, but Elizabeth and Philip are free to go – they are no longer contagious.

Elizabeth and Philip sit down with Gabriel. They tell him that they have done some thinking, and they don’t want the center to take care of Tim and Alice – they don’t want to put Paige through that. They have decided to try and talk to Tim and Alice, and get close to them, so they won’t feel comfortable turning them in. It’s a risky plan – but Philip and Elizabeth are sure it could work.

Elizabeth and Philip head home, Paige is relieved to see them. Henry is upset because they didn’t take their trip to Epcot. Philip tells him that they will try to make it up to them, and they all go out on a family bowling date together. For a little while, they seem like just any other average American family.

Tonight’s episode ends with Nina dreaming about getting her walking papers and leaving a free woman. A guard enters Nina’s cell and wakes her up – then he tosses all of her belongings in to a plastic bag and marches her down the hallway. Nina’s appeal has been denied and she is being sentenced to death. When Nina realizes what is happening, she starts hyperventilating. One of the guards shoots her in the back of her head and kills her right there inside of the prison. They wrap Nina’s body up in a blanket and carry her away.