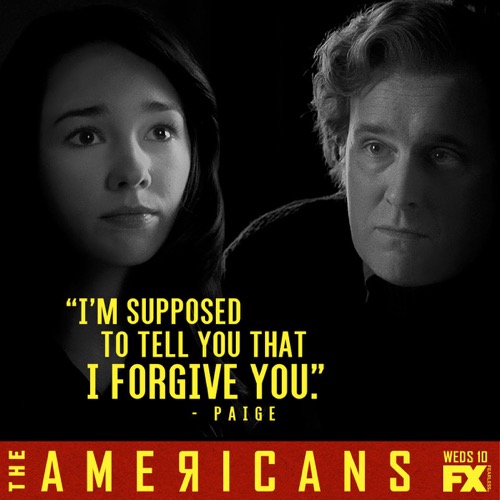 Tonight on FX The Americans airs with another all new Wednesday, April 20 season 4 episode 6 called “The Rat,” and we have your weekly recap below. On tonight’s episode, Philip (Matthew Rhys) faces a tough choice that will drastically impact him and Martha. (Alison Wright)

On the last episode Philip had to consider his life with Martha and made a crushing choice from which there was no coming back. Did you watch last week’s episode? If you missed it we have a full and detailed recap, right here for your enjoyment.

On tonight’s episode per the FX synopsis “Martha must finally face the truth she has denied – and her life may never be the same. Plus, a chilling new development in William’s work forces the Jennings to face the realities of what a biological war would mean.”

Tonight’s episode looks like it is going to be a great and you won’t want to miss it, so be sure to tune in for our live coverage of FX’s “The Americans” Season 4 episode 6 – at 10 PM EST!

Tonight’s episode of The Americans kicks off with Philip and Elizabeth in bed together, after having sex Elizabeth can tell that Philip’s mind is other places. She reassures him that Martha is okay. Philip admits he feels a little stupid for being so paranoid, but he feels responsible for Martha because he dragged her in to this.
Meanwhile at her house, Martha takes her pills as she packs a bag. She takes a look around her apartment, as if she may not be back, and then heads out the door.

At work, Eberholt and Stan are still obsessing over Martha. They have pulled all of her files, Eberholt learns that Martha had an abortion back in the 1960’s when it was still illegal and dangerous. Stan doesn’t believe her “married boyfriend” story.

Philip meets up with William at a park. He tells William that they need another sample of the biological warfare, Glanders. William says there is no way he can get his hands on any more Glanders. He can get some Tularemia though – he says it is “easily weaponized nasty stuff.” Philip says the Tularemia will do.

Philip vents to William about his Martha problem. He has a feeling that she is in danger, but the center won’t let him take her out. William scoffs that their bosses at the center have no idea what they are doing.

Martha heads to work, she catches Stan watching her over from across the room all day. She clocks out and heads home – while she is walking down the street, Philip/Clarke pulls up and tells her to get in the car. Philip tells Martha that he thinks they know about her at work and he is taking her somewhere safe. He takes her to an abandoned safehouse.

Gabriel arrives at the safehouse and he is not happy with Philip. Philip argues that he has been dealing with her for three years – he can’t just hang her out to dry. Gabriel takes Philip aside, he tells him that he screwed up, he needs to take Martha back home and send her to work in the morning like nothing has happened. Philip tells Gabriel that he can’t just let the FBI arrest her because she knows what he really looks like. Philip shouts at Gabriel that “Martha is done!” and then he storms off.

At the safehouse Gabriel prepares dinner for him and Martha. Elizabeth arrives in her disguise – she has brought some clothes and supplies for Martha. Martha is shocked when she recognizes her. Elizabeth tries to comfort Martha and tells her that she is there for her and will make sure nothing happens to her. She heads to the kitchen and leaves Martha sitting in the dark and watching TV.

Elizabeth is shocked when she realizes that Philip isn’t wearing a disguise, he tells her that she was suspicious and having a meltdown, he didn’t have a choice. Elizabeth is obviously put off. This means that Martha wasn’t sleeping with Clarke anymore, she was sleeping with her husband Philip. Elizabeth tries to send Philip home and offers to watch Martha over night, but he refuses to leave her and tells Elizabeth it is “better” if she goes home.

Elizabeth heads home and tries out a Korean recipe with Paige – her kids are not impressed with the tofu chicken but Paige sets the table anyways. Meanwhile, Henry is still caught up on Epcot, his mom reassures him that they will get there eventually.

After Elizabeth leaves, Martha confronts him – she can tell that Elizabeth/Jennifer is not really Philip’s sister. She wants to know if they are sleeping together, Philip dodges the question. But, he does confess to Martha that he and Liz/Jennifer work for the KGB.

Martha doesn’t take the news that she married a Russian spy very well. Philip comforts her while she sobs and promises her that he won’t ask her to do anything for him ever again. Martha finally pulls herself together and says that she doesn’t care about the KGB or the FBI chasing her – she still has Philip and that is all that matters. Martha kisses Philip and tells him that she wants to run away with him, and then she seduces him…while she cries. Gabriel lays downstairs in the livingroom, listening to them having sex.

At work the next day, Stan and Eberholt learn that Martha called in sick and they are suspicious. They call her house but there is no answer. Meanwhile at the safe house, Philip and Martha are planning their next move. She is optimistic that maybe the guy watching her was wrong and the FBI isn’t tailing her. Philip lets her down easy – but tells her that is definitely not the case, the FBI was on her. Martha gets emotional when she realizes that she is never going home.

Gabriel interrupts and tells Philip that he needs him, he just got an emergency phone call from William and he has the biological warfare. Philip doesn’t want to go, but he reluctantly agrees and heads out. Before he goes, he checks in on Martha, she’s asleep. He goes through her purse and finds her pills and a gun.

Eberholt and Stan head to Martha’s house – the landlord lets them in and they snoop around. Eberholt says he is going to call forensics to check it out. Something is definitely off, there are no photos, nothing personal – it’s as if no one really lived there. They run a check on Clark Westerfeldt, and it tured up an 85 year old in Florida and a 35 year old in Atlanta. Stan tells someone to run a check and see if there are any recent death certificates for Clark Westerfelds.

Stan heads in to Agent Gaad’s office – he and Eberholt fill him in on the Martha situation. They tell Gaad all about the search for Clark Westerfeld. Gaad is taken aback – Martha has worked at the FBI for over 10 years, he is nearly speechless, all he can say is “that’s crazy.”

Philip meets up with William – he gives him a test tube and tells him that he had to improvise, he had to bring a sample from a dead rat that had contracted Tulmeria. Before Philip leaves, William wants to know what happened with martha. Philip says he disobeyed the center and he is bringing her in. William congratulates him – he is impressed that Philip stood up to them. Meanwhile, Elizabeth is under cover and watching from around the corner. Apparently, she wanted to make sure that Philip is still doing his job.

Martha wakes up and finds Gabriel in the kitchen – he offers to make her breakfast, but Martha isn’t interested, she wants to know where Clark/Philip is.

At the FBI office, Agent Gaad is still dumbfounded about Martha, he feels guilty that he didn’t pick up on it sooner. Gaad thinks that is the reason Gene died, maybe he figured out what she was up to.

At the safehouse, Martha is getting ready to leave, apparently she is not waiting around for Clark. She grabs her purse and seems upset that her gun is missing. She stomps downstairs and out the door of the house –Gabriel calls after her, he tries to convince her to come back inside. Martha is furious – she raises her voice and demands to know where Clark is. Martha growls at Gabriel to get away from her or she will scream and tell everyone he is KGB. Gabriel is shocked … Philip blew their cover.