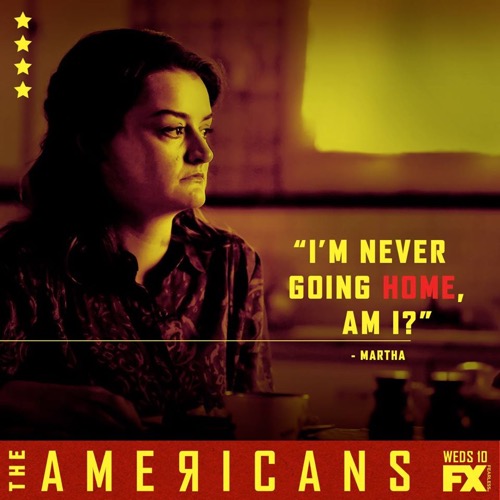 Tonight on FX The Americans airs with another all new Wednesday, April 27 season 4 episode 7 called “Travel Agents,” and we have your weekly recap below. On tonight’s episode, Stakes are raised as an agent is tracked.

On the last episode Martha had to finally face the truth she had denied – and her life may never have been the same. Did you watch last week’s episode? If you missed it we have a full and detailed recap, right here for your enjoyment.

On tonight’s episode per the FX synopsis “Stakes are raised as the KGB and the FBI race to track down an agent.”

Tonight’s episode looks like it is going to be a great and you won’t want to miss it, so be sure to tune in for our live coverage of FX’s “The Americans” Season 4 episode 7 – at 10 PM EST!

Tonight’s episode of The Americans kicks off with Philip and Elizabeth arriving at the safe house – Gabriel tells them that Martha ran off. He didn’t stop her because she stood on the street and threatened to call the KGB. Philip hands over the package they just picked up from William, a dead rat infested with biological warfare.

Philip starts racking his brain about where Martha may have ran off to. Gabriel tells him to start looking at her church. Elizabeth is going to call Hans to help her look. Gabriel will stay by the phone. Gabriel warns Philip that this is serious, Martha has seen their faces. If she starts screaming in public about the KGB, then Philip is going to have no choice but to kill her.

At the FBI, Stan and Eberholt take Agent Gaad aside. They found Clark Westerfeldt in Minnesota, he’s dead, apparently Martha’s boyfriend stole the identity of a dead 7 year old. Agent Gaad is convinced, he knows that Martha was working as a spy now. He tells them to get a sketch artist to draw up a photo of Clark.

Meanwhile, Philip and Elizabeth are driving around the city and looking for Martha. They decide to split up, Philip tells her to check in with Gabriel every half hour. Philip blames himself for Martha running off, he never should have left her alone with Gabriel. Elizabeth warns him that Gabriel is right – he might have to kill her.

Stan has an entire FBI team searching Martha’s apartment for clues. They are taking apart the furniture, looking inside the walls, even melting her ice cubes and opening unused tampons and looking inside them. Agent Gaad is still upset, while everyone tears apart Martha’s house, he stares out the window.

Martha is still frantically walking down the street, she spots a man in a suit nearby and is convinced that he is following her. Sirens wailing in the distance have her on the verge of a panic attack. She cries and walks in circles – Martha is freaking out.

Philip heads to the house where the switchboard operator mans the phone, he waits to see if Martha will call the number that he gave her. Meanwhile, Elizabeth calls and updates him – she and Hans still haven’t found her. Philip tells Elizabeth to check another place where Martha used to like to take long walks.

At the FBI office, Stan and his team are raking over all of the evidence that they confiscated from Marthas apartment. Agent Gaad tells Eberholt that they should check all of the Lutheran churches in the area. Gaad tells Stan to call his KGB contact and play a tape of Martha and see if they have her, Stan refuses, he doesn’t want to tip their hat just yet. Meanwhile, they have

Martha’s parents phones tapped – and they pick up a phone call from Martha. She calls her parents and tells them that she is in trouble and can’t talk long. The agents are able to trace the call to Woodley Park, Martha is standing on a bridge overlooking a rocky waterfall, contemplating jumping.

Stan and Eberholt and their team arrive at the park but Martha is nowhere in sight. Stan spots the bridge, he says that he thinks Martha may have jumped. Stan thinks that she called her parents to say goodbye.

But, Stan is wrong – Martha is at a payphone, she calls Philip and he picks up on the first ring. Martha shouts in to the phone that he left her with a stranger and it made her crazy. Philip apologizes profusely for leaving her in the house with Gabriel. Philip begs Martha to tell him where she is, she just cries in to the phone that she wants this to all be over. She finally stops crying long enough to tell Philip where she is – he rushes out the door to pick her up.

Stan is walking up and down the bridge that he thought Martha may have jumped off – Eberholt climbs underneath to check out the rocks.

Elizabeth arrives at the park before Philip, she finds Martha sitting on a park bench by herself, surrounded by trees. Elizabeth sneaks up behind her – she tells Martha that she came to stay with her until Clark got there. Martha gets emotional, she demands to know if Elizabeth is sleeping with Clark/Philip.

Martha has more questions – she starts screaming and acting frantic again. Elizabeth hits her and knocks the wind out of her to shut her up, and then orders Martha to come with her now before they all get arrested and their lives are over. Elizabeth tells Martha that is she comes with her now – she won’t have to kill her.

Clark arrives at the park a few minutes later – and Martha and Elizabeth are both gone. He wanders around and shouts Martha’s name. Finally, he gives up and heads to the payphone.

Meanwhile, Philip and Elizabeth’s son is hanging out at Stan’s house with his son. Henry convinces Stan’s son to let him have a beer. Paige shows up at the door – she decides to have a beer with her brother and Stan’s son. So, while Stan is out playing a game of cat and mouse with Elizabeth and Philip – their kids are all at home getting drunk together.

Philip rushes back to the safe house – he finds Martha upstairs in the bedroom, recovering from her hit from Elizabeth. She reassures him that she will be okay and then demands to know what his real name is. Philip tells her his name is Philip, but his born name was Mischa. He heads downstairs to get her some ice, he finds the dead rat in the freezer in a glass next to the ice tray.

Oleg and Tatiana are working for Oleg and putting together a secret mission to get someone out of the country and back to the Soviet Union undetected. It sounds like they may be talking about Martha. Arkadi checks to make sure that everything is ready, he tells Oleg and Tatiana that “they got her.” Back at the safehouse, Elizabeth tells Philip that he needs to get Martha on the plane.

It looks like Elizabeth is finally starting to be affected by the fact that Philip was fake married to another woman. She gets emotional and asks Philip if the kids were grown – would he head back home with Martha and start a new life. Philip explains that things are “different” between him and Martha. He reassures Elizabeth that he loves her. But, he has to stay at the safe house with Martha tonight so that she doesn’t try to run again.

At the FBI office, Stan and Agent Gaad get shocking news – Martha is married to a KGB officer, they weren’t just dating. Stan is shocked by the marriage certificate. He thinks they may have gotten it wrong – maybe Martha and the KGB officer were really in love. Gaad knows his days are numbered, the agency is going to cut him loose, how did his own secretary marry a KGB officer right under his nose?

At the safe house, Philip breaks the news to Russia that they are putting her on a plane and sending her to Russia so that she will be safe. He tells her that she can start over and have a new life. Martha wants to know when Philip will come to Russia to be with her. He says that he can’t come, not even to visit.

Martha is worried about her parents – Philip promises that he will get a message to them from her. Martha cries, she doesn’t want to be alone again – like she was before she met Philip. He promises that the Russians will take good care of her, and honor her for the work she has done for them.

Elizabeth is at home, getting ready to go to bed alone, again. Philip sleeps at the safe house with Martha for one last night, before she gets on the plane and leaves the country.