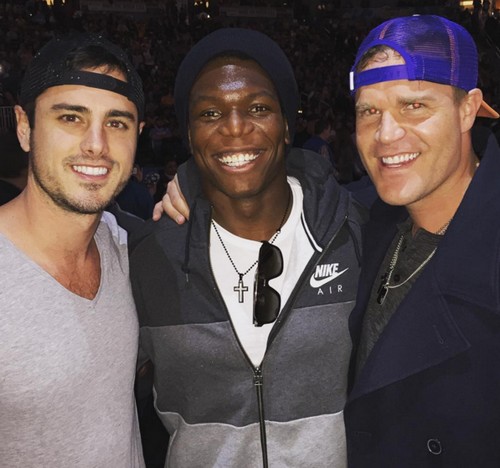 An eyewitness told Star magazine that Ben Higgins was in a hotel bar in Tampa flirting with lots of ladies. Ben was on a business trip and staying at the Hilton when this alleged flirting occurred on February 17.

If the time line reported by the witness is correct, that’s about three months after filming end for the Bachelor 2016 and proposing to Laren B.

The source went on to say, “Ben gave every girl in the vicinity an ear-to-ear grin.” Higgins couldn’t keep the ladies ways, he didn’t even try. “If I was any of the contestants I wouldn’t be very happy with the attention he was getting that night!” the insider stated.

Does Ben’s fiancée really have anything to worry about? After all, this eyewitness at the bar makes it sound like the ladies attacked Ben. Maybe Ben Higgins was grinning ear-to-ear because he was panicked and trying to figure out how to get out of there without being trampled.

As far as jealousy over the alleged Tampa bar encounter, if Lauren Bushnell is still Ben’s fiancée there might be a serious problem. As CDL previously reported, Lauren can be a clingy and needy girlfriend who will blow up his phone with calls and texts if Ben goes out with friends. This is reportedly only part of Lauren’s past that she’s keeping secret from Ben.

If by some chance Ben and JoJo Fletcher are engaged and Reality Steve is wrong again she probably won’t make too big a deal of the flirting incident. What will probably upset JoJo Fletcher more than some meaningless flirting will be the fact that Ben said “I Love You” to both her and Lauren. The biggest sting may come when JoJo and Lauren find out Ben may have had sex with them both on his fantasy suite dates.

After all that Ben Higgins has gone through to find love would he really jeopardize his engagement by cheating with some woman he picked up in a bar? Who knows, maybe Ben’s fiancée was waiting in the hotel room for him? Maybe TPTB of the Bachelor 2016 arranged a secret Valentine’s Day rendezvous?

Let us know what you think in the comments section below and come back to CDL for the latest The Bachelor 2016 news and spoilers.