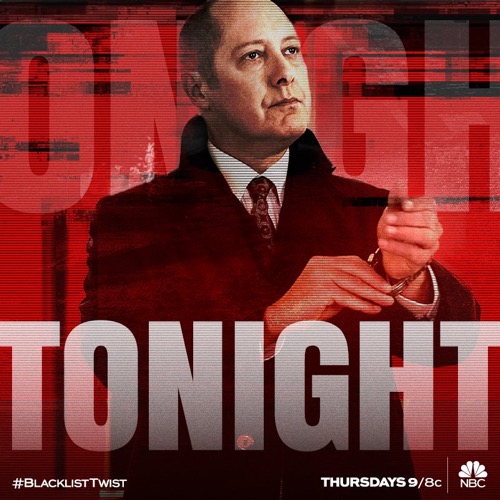 On the last episode as The Cabal prepared to assassinate Liz (Megan Boone), Red (James Spader) called upon the task force to combine efforts to outmaneuver The Cabal to exonerate her. Did you watch the last episode? If you missed it, we have a full and detailed recap right here for you.

On tonight’s episode as per the NBC’s synopsis, “Red (James Spader) works with the task force to infiltrate an assembly of high-level criminals.”

Tonight’s episode of The Blacklist kicks off in the midst of a bloody crime scene – it looks like a whole family has been massacred. Kaplan arrives with her maid crew and they get busy cleaning up the mess. A few minutes later men with guns barge in and kills Kaplan’s entire crew. The ring leader tells Kaplan to deliver a message to Reddington, he says “tell Reddington we know,” and then leaves as quickly as he arrived. A few minutes later, a man who bears an uncanny resemblance to Red receives a phone call – he tells the person on the other end of the line that he will be in Washington DC soon.

Elizabeth stops by Harold’s office – he strips her of her badge and gun, she is a convicted felon now. Liz formally apologizes to Aram, Samar, and Ressler for what she took them through. Harold reassures Liz that their work together is not over – and she is going to be a phenomenal resource for the FBI.

Liz heads to Red’s, Kaplan is there giving him the message from the gun man. After she leaves, Red asks Liz what she knows about the Shell Island Retreats. It’s a ritual that dates back to the 1920’s, Red says the master of ceremonies is a man named Marcus Calguiri – he also happens to be a leaders on the largest weapons dealer in the world and multiple cartels. Red says that the Shell Island Retreats is a super secret meeting that is only help when there is a problem so great that rival leaders have to work together to solve it. One’s of Red’s ex-associates, a man named Howard, was invited to the big Shell Island Meetings – but Red has no idea who called the meeting or what they are meeting about.

Liz heads to the FBI office and briefs Ressler and his team on the Shell Island meetings – there is an entire list of wanted FBI criminals that will be at the meeting. They don’t know where the meeting is going t take place yet, they have to track down Howard Jasnoch – he has all of the details, and works as some sort of underworld travel agent.

Afterwards, Liz heads to the docks to see Tom where he is working on his boat. She rushes up to him and they share a passionate kiss. Tom gets down on one knee and asks Elizabeth to marry him…again. He doesn’t have a ring – he uses an old washer that he found lying on the dock. Elizabeth says that she doesn’t know what the future holds, but right now she wants him, they board the boat and began stripping each other’s clothes off.

Ressler brings Howard in for questioning and demands to know who he is making travel arrangements for hat is going to the Shell Island Retreat. Howard says he doesn’t know the address of the retreat – but he knows the address of the man that is calling the big meeting. Ressler and his team rush to the house and barge in , they arrest the man that looks similar to Red. Ressler demands to know what his name is and he announces that he is the REAL Raymond Reddington.

Liz gets a call from Ressler and rushes to the office – he fills her in on the man they arrested. Apparently, he had hundreds of files in his house on all of the blacklisters and FBI intel that Red has given them since they partnered up. The man insists that he is the real Raymond Reddington – Harold points out he could be telling the truth, Red was off the grid for 25 years and just resurfaced last year. Nobody knows what the real Reddington is supposed to look like, he could have had plastic surgery.

Elizabeth heads down to the basement to talk to the Reddington imposter (or possibly real Reddington). He says that Red is just using Elizabeth and all of the blacklisters that Red has given up over the years are his friends and colleagues – he’s not happy.

Upstairs Red watches the interrogation with Ressler and the team. He says that after the manhunt, rumors are floating around that he is working with the FBI. The imposter is just a probe that was sent in to see if rumors are true and Red really is a snitch. What better way to find out if Red is working for the FBI – than to pretend to be the real Red and get yourself captured by the FBI?

Meanwhile Red #2 talks in to the camera in the interrogation room – he says that he knows where the Shell Retreat is because he is the real Red. He goes on to reveal that an FBI executive is going to be taken and he can save her – but in exchange with wants a meeting with the man that has stolen his identity. He says Janet McNamara will be kidnapped any moment now by Calguiri.

Ressler and Samar rush to Janet’s son’s piano recital – Calguiri’s men arrive at the same time. A shoot out ensues, but they manage to grab Janet and kidnap her. Ressler chases after the truck and tries to shoot out the tires, but he has no luck.

Liz is having trouble adjusting to her new life as a convicted felon – she wants to leave with Tom and start over. Red shows Liz a map of all of the Cabal’s associates and competition – he says that the battle has just begun, just because they took down the Director doesn’t mean anything. Red tells her that she is the daughter of a legendary spy master and they are coming for her, she’s a secret keeper.

Liz heads down to the basement and tries to talk to Red #2. He tells her that he will give her the address of the Shell Island Retreat and they can arrest everyone there – if they let him walk. Harold tells Liz to make the deal, and wire up the imposter.

Meanwhile, Red #1 heads to the meeting and introduces himself as Raymond Reddington. At the meeting he announces that he is not happy that three of his employees were murdered by someone in the room, he will prove that he is not working for the FBI. Marcus Calguiri takes out a phone and plays a video of Janet McNamara being held hostage – she confirms that Raymond Reddington has been their most valuable asset over the past two years.

Red #2 walks in to the meeting wile Marcus and Red are arguing. He announces he is the real Raymond Reddington and all eyes are on him. Red announces the “Fake Red” has been feeding the FBI intel under his name. Marcus Carguili doesn’t want to hear it – he says that they should just kill both of the Red’s. Marcus’s men search Red #2 for a wire – the FBI loses signal and rushes in with an entire SWAT team. Red stabs and kills Marcus, and then shoots and kills the fake Red. Then Red helps the criminals at the Shell Meeting escape without getting caught by the FBI.

Ressler recues Janet McNamara from the building where Carguili was holding her hostage. Red gets some alone time with Janet – he tells her that she is a threat to his safety because she knows he works for the FBI. He tells her to resign from the FBI and move to Santa Monica, he bought her a house and will see to it that she is taken care of.

Elizabeth visits Red at the cemetary, he reveals that the fake Red’s name is Greg DeVry – and he hired him to pose as his imposter. Red devised the entire scheme to clear his name and prove to the other leaders that he is not giving the FBI intel. Elizabeth’s asked why he killed Greg, if he was working for him. Red reveals that it was a selfless act – Greg wanted to die – he has terminal stomach cancer.

Tonight’s episode ends with Tom Keen – he has been summoned by Red. Red tells him that he will not marry Liz. Tom scoffs, “Why because I don’t have Daddy’s permission?”
A man recognizes Elizabeth in the street and attacks her and calls her a traitor. Elizabeth is rushed to the hospital – she has a few broken ribs, but she will be fine. Then the doctor reveals that she is pregnant…