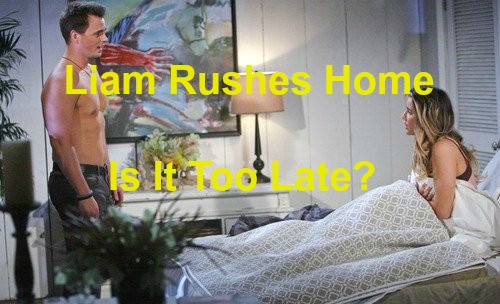 “The Bold and The Beautiful” (B&B) spoilers reveal that Liam Spencer (Scott Clifton) will rush back to LA to try and make things right with Steffy Forrester (Jacqueline MacInnes Wood) but an encounter with a stranger on the plane will have him rethinking whether he should stick with her or not.

Special guest star Orson Bean plays Howard, a fellow passenger on the Sydney to LA flight, who gives Liam some sage advice to consider. You may know Bean from Desperate Housewives or Dr Quinn Medicine Woman. He also voiced Bilbo Baggins in the animated The Hobbit movie from the late 70s.

Side note – Bean is married to Alley Mills who plays Pam Douglas on B&B. Bean told CBS Soaps in

Depth that “The Bold and The Beautiful” showrunners invited him for the two episode cameo when they saw his one man show in LA last year.

Howard is a stereotypical codger who grouses when friendly Liam tries to make small talk on the 14 hour flight home. When Liam won’t leave him in peace, Howard finally engages in conversation which results in Liam laying out his entire romantic conundrum to the stranger on the plane.

The end result is that while Liam left Sydney fully determined to win back Steffy, the conversation is transformative for Liam who rethinks whether Steffy is the one for him. Meanwhile, Steffy is back in LA assuming the worst with Wyatt Spencer (Darin Brooks) lurking around playing supportive pal.

Will Steffy and Wyatt share a kiss as he comforts her? Will Liam catch them at it? If he does, could that make him want to fight for Steffy or make his decision more firm that they are ill-suited for one another? Ivy Forrester (Ashleigh Brewer) has told Liam again and again that Steffy is too volatile.

Will Ivy’s words, plus assurance of her love, along with the insight gained from talking to Howard finally get through to Liam? Even if Liam doesn’t want Ivy, he’ll soon see that Steffy is a loose cannon and he’s not the kind who wants to see people around him suffer collateral damage for her actions.

More than one person in LA would be thrilled if Liam called off the engagement – chief among them being Quinn Fuller (Rena Sofer) who is thrilled Ivy is gone and now wants Wyatt hooked up with Steffy. Perhaps Quinn sees a lot of herself in Steffy (what a scary notion)…

The special guest star scene with Orson Bean is not to be missed – and it makes sense for Liam to listen to the grumpy old coot. After all, sometimes it takes someone with distance from a situation to offer you a realistic perspective – Liam can’t see Steffy clearly because he’s too close and too optimistic.

Looks like that accidental trip Liam took to Australia may have been worth the price of the round-trip airfare if he gets advice that could save him from making a colossal mistake in marrying Steffy that could ruin his life.

Don’t miss a moment of B&B on CBS daily and be sure to check back with CDL often for tons more “The Bold and The Beautiful” spoilers, news and updates.