The Bold and the Beautiful (B&B) Spoilers: Quinn’s Scheme Out of Control, Liam in Danger – Bill and Brooke Battle Desires

BY Heather Hughes on January 22, 2016 | Comments: one comment
Related : Soap Opera, Spoiler, Television, The Bold and the Beautiful 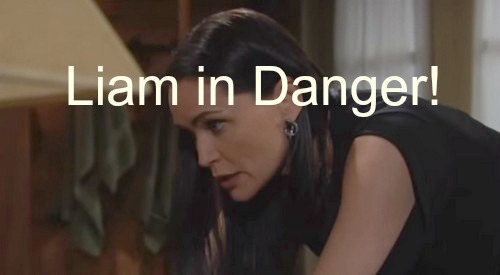 “The Bold and the Beautiful” spoilers for Friday, January 22, reveal that Quinn (Rena Sofer) will be faced with quite a dilemma. After Liam (Scott Clifton) collapsed right in front of her, Quinn stuffed him in the car and took him to her cabin. Quinn fears that Liam could be having serious health issues, but she can’t bring herself to take him to the hospital just yet.

B&B spoilers say Quinn will pound on Liam’s chest in an effort to wake him up. It looks like it’ll be no use. Liam is out cold. Quinn will probably feel a twinge of guilt for withholding medical attention, but it’s doubtful that it will prompt action. This is Wyatt’s (Darin Brooks) big chance to win Steffy (Jacqueline MacInnes Wood) over. Still, Quinn will believe Liam needs to awaken so she can fully assess the situation.

Meanwhile, Wyatt will cradle Steffy in his arms and tell her he’s sorry about what she’s going through. Since Quinn sent a text on Liam’s phone, Steffy thinks he’s the one who said he wasn’t coming. Steffy just wanted a chance to talk through their issues. All Liam had to do was show up. “The Bold and the Beautiful” spoilers tease that Steffy will finally realize there may be no hope for her relationship.

Unfortunately, Steffy isn’t aware that Liam had two good reasons for his absence. Between his head injury and Quinn, things are getting dangerous for Liam. Nevertheless, Wyatt will be try to be Steffy’s knight in shining armor. Wyatt won’t know what to say to make Steffy feel better, but he’ll let her know he’s there for her.

At Spencer Publications, Brooke (Katherine Kelly Lang) will remind Bill (Don Diamont) that he’s married to her sister and they have to resist their desires. Ever since Brooke’s profession of love, Bill has done nothing but fantasize about the fling he wants to have with his ex. By next week, Katie (Heather Tom) will overhear Brooke talking about her feelings for Bill.

Katie will soon understand that something’s going on. She’ll collapse as the betrayal consumes her. Brooke and Katie’s bond may never be the same. Stick with “The Bold and the Beautiful” for updates on the tough times ahead for these sisters.

So B&B fans, what do you think about the news that Quinn will continue to hide Liam? Will Steffy decide to move on since Liam was a no-show? Will Brooke’s feelings destroy Bill’s marriage? Voice your opinion in the comments below and don’t forget to check CDL often for the latest “Bold and the Beautiful” spoilers, updates and news.

The Bold and the Beautiful Video Preview for Friday, January 22 2016