The Bold and the Beautiful (B&B) Spoilers: Ridge Lies About Sperm Donor – Thomas Learns He’s a Daddy During May Sweeps 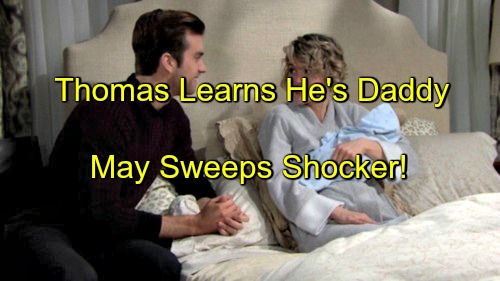 “The Bold and the Beautiful” (B&B) spoilers tease that Katie (Heather Tom) will continue to pester Ridge (Thorsten Kaye) over Dr. Wolin’s (Mark Damon Espinoza) claims on next week’s episodes. Ridge told Katie she was playing a dangerous game, but she certainly doesn’t seem too intimidated. Perhaps it’s all of that liquid courage.

Katie can tell that Ridge is lying about Douglas’ paternity. She’ll want to know who this child really belongs to. Maybe Katie will suggest that the biological father deserves to hear the truth. Ridge will realize that Katie isn’t going to drop this, so he’ll try another lie.

“The Bold and the Beautiful” spoilers say Ridge will attempt to throw Katie off the trail by presenting the idea of a sperm donor. He’ll state that he couldn’t give Caroline (Linsey Godfrey) the baby she wanted, so they had to go with a different option. Naturally, Katie will be suspicious.

She’ll likely contend that there’s no reason for Ridge to keep that quiet.

If Ridge used a sperm donor, then why not just say so from the beginning? It’s a common practice. Nicole (Reign Edwards) was artificially inseminated not too long ago. Ridge could’ve easily said Caroline was as well. Many B&B viewers are wondering why Ridge didn’t go with this excuse in the first place.

Of course, Ridge may have decided against that explanation because it could’ve created more questions. The standard when, where and why might’ve created a web of lies to get trapped in. Thomas (Pierson Fode) definitely would’ve been skeptical about the details, which is exactly what Ridge has been trying to avoid.

Unfortunately, Katie’s digging is probably the beginning of the end. This part of the storyline is winding down and Thomas is set to learn the shocking reality of the situation. He’ll suddenly find himself in the loop at some point during May sweeps.

The building tension will turn into exploding drama and we can’t wait to watch it unfold. Will Thomas ever forgive Ridge for hiding such a significant secret? Stick with “The Bold and the Beautiful” for updates on the mayhem.

So B&B fans, what do you think about the news that Ridge will make up an excuse for Katie? Is this how Ridge’s plan will start to crumble? Will Thomas unleash his wrath once he discovers the truth?