The Bold and the Beautiful (B&B) Spoilers: Will Caroline Dump Ridge for Thomas? – Vote in Our Poll

BY Heather Hughes on May 31, 2016 | Comments: 3 comments
Related : Soap Opera, Spoiler, Television, The Bold and the Beautiful 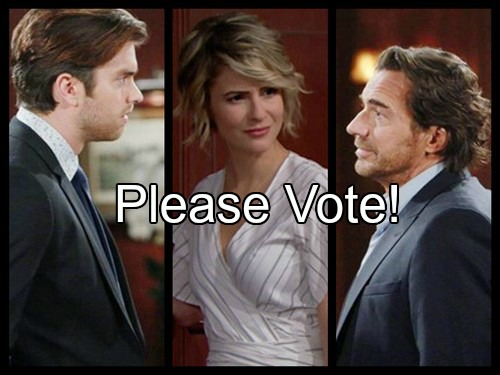 “The Bold and the Beautiful” (B&B) spoilers tease that a storm is brewing for Ridge (Thorsten Kaye) and Caroline’s (Linsey Godfrey) marriage. It’s surprising that they haven’t faced more issues already. Thomas (Pierson Fode) is the true father of Caroline’s baby, but Ridge is determined to raise Douglas as his own child.

We all know Ridge can be controlling and this baby situation has certainly demonstrated that. Caroline is expected to go along with whatever Ridge says, even when she has doubts about it. She’s had to quiet her conscience a lot thanks to Ridge. It doesn’t matter what’s right and what’s wrong. Ridge’s opinion is apparently the only one that matters.

Caroline agrees that they need to avoid a scandal, but that doesn’t mean she wants to push Thomas out of Douglas’ life entirely. She assured Thomas that he could be there for his little brother, but Ridge chose to override Caroline’s promise. Now Thomas is taking a stand and Ridge’s strategy could backfire. If Ridge keeps trying to run the show, B&B spoilers say that Caroline may be forced to stand up to him as well.

Caroline shared some sweet moments with Thomas after he got updates on the fact that Douglas was his son. They have a bond through the baby and that will likely intensify as this storyline moves along. “The Bold and the Beautiful” buzz suggests their growing connection could stir up old feelings. Thomas would obviously jump at the chance to reunite with Caroline, especially now that she’s the mother of his child.

Since Thomas is only keeping quiet to avoid public humiliation for Douglas, things will inevitably change after the paternity news starts to spread. Thomas probably won’t want Ridge to raise his child once there’s no secret to protect. If a custody battle gets ugly, Caroline might side with Thomas. Ridge could end up losing his baby and his wife if he continues being such a brute.

To be fair, Douglas wasn’t conceived under ideal circumstances. However, Thomas has been trying to turn his life around lately on “The Bold and the Beautiful.” He’s becoming more responsible and there’s undoubtedly a good reason for that. Is B&B setting Thomas up as a respectable father and love interest for Caroline? Caroline may be tempted to get back together with her ex at some point.

We want to know what you think about this possibility. Will Caroline dump Ridge and reunite with Thomas? Vote in our B&B poll and don’t forget to check CDL often for the latest “Bold and the Beautiful” spoilers, updates and news.