The Bold and The Beautiful (B&B) Spoilers: Will Quinn Kill Liam to Protect Wyatt’s Marriage to Steffy? 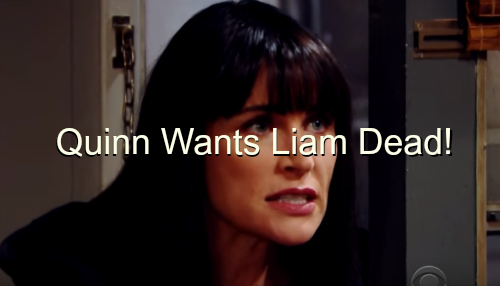 ‘The Bold and The Beautiful’ (B&B) spoilers tease that Liam Spencer (Scott Clifton) will be woken by a masked intruder breaking into his house and will be terrified. But is it a stranger breaking in? Or is it Quinn Fuller (Rena Sofer) there to harm Liam?

B&B spoilers reveal that Liam wields a golf club and chases off the trespasser but was it Quinn and if so, why? Since Liam flat-out told Quinn he will never be with her again and Steffy Forrester (Jacqueline Wood) is his true love, Quinn may be unhinged.

Quinn was trying to embrace the goodness inside her that Liam encouraged, but now that she knows she can’t have him, Wyatt Spencer (Darin Brooks) is all she has left. Steffy will push for Quinn to stay out of her life and Wyatt’s and that’s a problem.

After a coming confrontation between Steffy and Quinn, Wyatt’s mom will see Steffy as a threat to Quinn being a continued presence in Wyatt’s life. But more important is that Liam is a threat to Wyatt’s marriage since he’s clearly not backing down.

A new B&B promo video shows Quinn dressed in a hoodie vowing, “As long as Liam lives, he’s a threat to my son’s marriage.” Is that Quinn’s breaking and entering outfit? The video shows a prowler with a flashlight poking around Liam’s house, but is it Quinn? 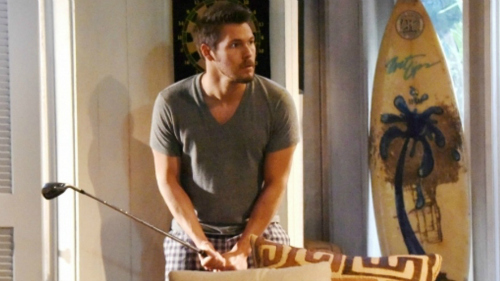 What makes all this worse is that Wyatt soon has reason to suspect that his marriage to Steffy may not be legal. That puts Wyatt in a more precarious position with Steffy because if they’re not married, she might run back to Liam.

That revelation could motivate Quinn to take drastic action. She pondered hurting Liam back when she first took him away from Forrester Creations when he had that head injury. But it was Liam’s affection for Quinn that saved his life.

With that affection dead and Liam being utterly cold to Quinn, she might hurt him for real this time in an effort to make Wyatt’s life better. That was her intention before and it might be once again if Quinn feels that it’s what needs to be done.

What do you think B&B fans? Is Quinn the masked intruder that comes to scare Liam? Would Quinn hurt Liam? Has Liam killed Quinn’s love for him so now she’s planning on killing him?