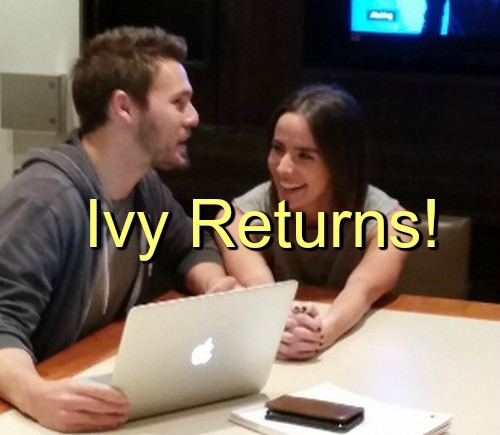 “The Bold and The Beautiful” (B&B) spoilers reveal that Ashleigh Brewer is on set filming, back from her break, which means Ivy Forrester will be in the mix soon at B&B. What does that means for the plotlines and new couplings that have emerged in her absence? Let’s take a look.

When Ivy left for down under, she was still in love with Liam Spencer (Scott Clifton) who insisted he was committed to Steffy Forrester (Jacqueline MacInnes Wood) and ready to walk her down the aisle so he told Ivy to move on without him.

But now Liam’s got a fake wife in Quinn Fuller (Rena Sofer) and thanks to his amnesia and casual kidnapping by Quinn, he’s on the outs with Steffy. Ivy’s back-up guy Wyatt Spencer (Darin Brooks) is now making time with Steffy and wants to wed her – and he already bedded her.

Looks like there’s no room in these strange new relationships and Ivy is the odd woman out. What does that mean for Ivy? With Wyatt trying to get Steffy down the aisle and Liam soon to regain his memory and be horrified that he’s been intimate with Quinn and Steffy moves on, will Ivy move in on Liam?

Or perhaps it’s time for Ivy to give a newly changed Thomas Forrester (Pierson Fode) a chance at love since he really liked her before. Perhaps the recently returned Deacon Sharpe (Sean Kanan) will be an older man love interest for Ivy…

Even if Liam can’t win back Steffy, he may decide he can’t do without Quinn no matter how unwise pursuing that romance may be. So while Ivy’s former flames Wyatt and Liam may be otherwise occupied, it seems like Ivy may need a new love interest. Who could it be?

What do you think B&B fans? Who do you want to see Ivy hook up with upon her return? Want to see her fight for Wyatt and try to steal him from Steffy? Or if Steffy and Wyatt split when Liam returns, will Ivy help Wyatt pick up the pieces? Or should it be Thomas?