The Bold and the Beautiful Spoilers: Bill Furious When Ridge Makes Play for Brooke – Bill Joins Quinn’s Team in Retaliation

The Bold and the Beautiful (B&B) spoilers tease that Ridge (Thorsten Kaye) will decide to confront Brooke (Katherine Kelly Lang) before she ties the knot. Ridge initially thought securing Bill’s (Don Diamont) shares was important enough to put Brooke’s future on the line. However, he’s slowly starting to shift his view.

Ridge still wants those shares, but he may realize that the price is just too steep. How can he let Brooke marry Bill when he still has feelings for her? As Ridge’s heartache grows, he might determine that he just can’t take it anymore. 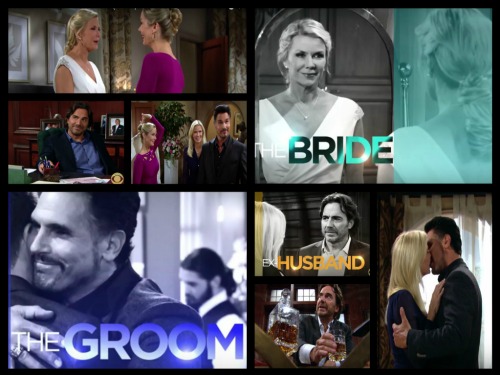 The Bold and the Beautiful fans know that Ridge is often pig-headed. He tends to think he’s right about everything. Even when Ridge’s opinion changes, he just throws that stubbornness over to his new perspective. It looks like that’s what Ridge is about to do in this marriage situation.

Ridge will show up to see Brooke before she heads to the ceremony. Brooke will wonder what Ridge is doing there and he’ll probably tell her this wedding can’t happen. Of course, the guests and minister will be waiting. The groom will also wonder where his bride is.

If Bill grows impatient, he could go check on Brooke to see what’s the matter. B&B spoilers suggest that Ridge and Bill could get in a huge argument about their mutual love interest. If this is how Ridge is going to act, Bill might just take the shares off the table.

Maybe Bill will insist that Brooke needs to marry him for love or not at all. Without any other incentive, would Brooke still get hitched? She claims she wants to be with Bill, but there must be a reason she’s not entirely sure about the wedding. Ridge has obviously planted some doubt in Brooke’s mind.

Brooke could maintain that she loves Bill and they could get married as planned. However, there’s a good chance Brooke will call the whole thing off. The conflict may make her want to take a step back. Regardless of Brooke’s decision, you can bet that Bill will be furious with Ridge for causing issues.

The Bold and the Beautiful spoilers hint that another round of strife is looming at Forrester Creations. That might be because of Bill’s refusal to hand over his shares to Ridge. However, there could be a deeper reason for the trouble.

Could Bill team up with Quinn (Rena Sofer)? He hates her, but not as much as he hates Ridge. If Bill and Quinn worked out some type of agreement, she could end up with his shares. That would seal the deal on keeping Ridge out of power.

Even if Bill chooses to keep his shares, he could still find a way to stick it to Ridge. Wyatt (Darin Brooks) and Bill shared some nice moments recently. Since Bill was very much “Team Wyatt” throughout the Steffy (Jacqueline MacInnes Wood) drama, perhaps he could try to make things better for his son.

Bill might make a move that will benefit both Quinn and Wyatt. Whatever the case, Ridge is likely going down hard. You don’t mess with “Dollar Bill” and get away with it.

We’ll give you updates as other news comes in. Stay tuned to B&B and don’t forget to check CDL often for the latest Bold and the Beautiful spoilers, updates and news.

How does #BB18‘s Victor feel now that his soap opera dreams have come true? Find out #BoldandBeautiful pic.twitter.com/U51KrG5esS

NEXT WEEK: The bride, the groom, the ex-husband… pic.twitter.com/BZInS9Fyod