‘The Bold and the Beautiful’ Spoilers: Brooke Faces Doubts About Marriage To Bill – Ridge Explains the Stakes to RJ 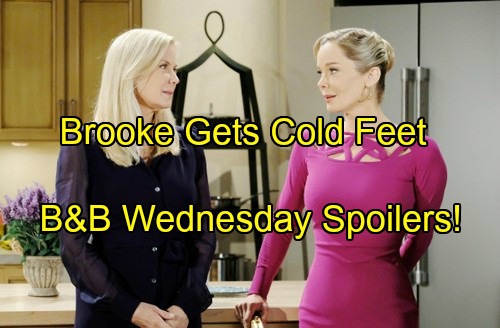 The Bold and the Beautiful spoilers for Wednesday, October 26, tease that Ridge (Thorsten Kaye) will try to explain the complex situation to his son. RJ (Anthony Turpel) just can’t understand why Ridge isn’t fighting for Brooke (Katherine Kelly Lang). He can tell that Ridge is longing for his ex. RJ will urge his father to go after what he wants.

Ridge will insist that it isn’t that simple. Love is complicated enough, but there’s an extra layer of drama here. Bill (Don Diamont) has promised his shares as a wedding gift and Brooke plans to hand them over to Ridge. Since Ridge is desperate to get rid of Quinn (Rena Sofer), it’s tough for him to pass up this opportunity.

The Bold and the Beautiful spoilers say Ridge will try to help RJ see how important this is. Their family’s legacy is at stake. Ridge just doesn’t see any other way to get control back at Forrester Creations.

RJ may suggest that Ridge is sacrificing Brooke over a business matter. However, Ridge might argue that he can win Brooke over after she ties the knot. He views this as a temporary arrangement to secure the shares.

Brooke is resisting the idea of an annulment, but Ridge may believe he can change her mind.

RJ could counter that Brooke is going all in on this marriage. He might fear that Brooke will be permanently linked with Bill after they state their vows. It looks like Ridge could share that perspective later this week. B&B fans can expect some major conflict as Ridge works to stop the wedding.

In the meantime, Donna (Jennifer Gareis) will help her sister prepare for her nuptials. The Bold and the Beautiful spoilers reveal that Brooke will be happy to have Donna’s support on her big day. Unfortunately, Brooke won’t exactly be confident about the ceremony.

Donna will quickly pick up on Brooke’s apprehension. She’ll push Brooke to open up about how she’s truly feeling. B&B spoilers say Brooke will admit that she has some concerns about this marriage. She might mention her Ridge issues as well as her doubts about a future with Bill.

Donna will indicate that Ridge is no prize either. She’ll feel like Ridge has caused plenty of pain for Brooke in the past. Ultimately, Donna will just want Brooke to be at peace with whatever decision she makes.

Brooke will likely determine that she’s ready to make a commitment to Bill. She’s cared about him for a long time and it’s clear that he adores her. Brooke will attempt to push through any remaining uncertainty and get this show on the road.

Will Ridge cause Brooke to rethink that plan? Brooke has an extensive history with both Bill and Ridge. They’re arguably her two great loves. Which one will Brooke choose in the end? We’ll give you updates as more news comes in.

Have a Q 4 @JacquelineMWood or @CliftonsNotes ? Tweet it w/ #BoldandBeautiful 4a chance 2have it answered during Fridays live Facebook chat pic.twitter.com/PMbLVxYhib