The Bold and the Beautiful (B&B) Spoilers: Bill Gears Up for Revenge, Liam Wants Quinn to Pay – Ridge Erupts at Katie 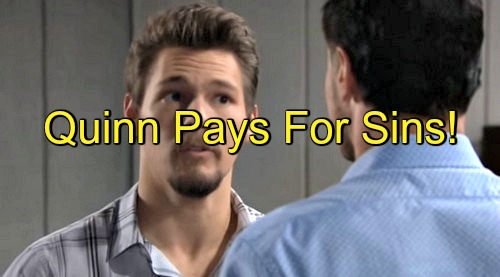 “The Bold and the Beautiful” (B&B) spoilers for next week’s episode on Monday, April 25, tease that Bill (Don Diamont) will have a plan for retribution. Quinn (Rena Sofer) is still out there somewhere and Bill doesn’t want her to get away with her dirty deeds. Liam (Scott Clifton) will suggest that Bill needs to do whatever it takes to bring Quinn down.

He’ll want Quinn to pay for what she did to him.

Later, they’ll put aside their revenge discussion in favor of a chat about love. After years of treating Liam like the golden boy, it seems Bill is finally joining Wyatt’s (Darin Brooks) team. Bill has been adamant that Liam needs to respect the boundaries of Steffy (Jacqueline MacInnes Wood) and Wyatt’s relationship.

“The Bold and the Beautiful” spoilers say Bill will insist that Steffy is married to Wyatt now. Liam will calmly reply, “That can change.” Liam has some fierce determination, but Wyatt will try to keep Steffy in his corner. Wyatt will get agitated as he speaks to Steffy about his brother. He’ll believe Liam needs to back off and butt out.

Wyatt will declare that life went on while Liam was gone. He’ll state that Steffy couldn’t be expected to wait on Liam indefinitely. Steffy had every right to move forward and now she has every right to choose Wyatt. Of course, we all know that Steffy’s feelings for Liam are bubbling back up. In fact, they never truly went away.

Ridge will blow his top and imply that Katie poked her nose where it didn’t belong. Ridge’s rage should confirm that Dr. Wolin was telling the truth. Katie will know that Ridge must have a reason to lash out. Will Katie get Ridge to admit he’s not the father?

Stick with “The Bold and the Beautiful” for updates on the tense moments ahead.

So B&B fans, what do you think about the news that Bill will focus on getting vengeance? Will Quinn ever really pay for her actions? Will Wyatt’s possessiveness push Steffy away? How long can Ridge keep his secret contained?