‘The Bold and the Beautiful’ Spoilers: Bill Kidnapping Will, Says Brooke – Quinn Pushes Steffy Away From Wyatt, Back To Liam 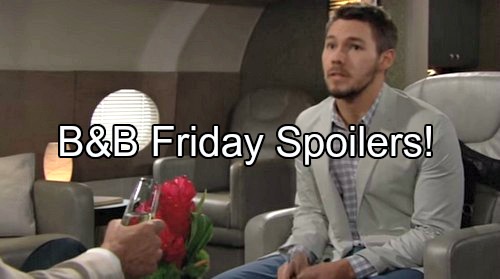 The Bold and the Beautiful (B&B) spoilers for Friday, July 22, tease that Brooke (Katherine Kelly Lang) will try to convince Bill (Don Diamont) that he’s the one in the wrong. Bill claims that he’s protecting Will (Zane Achor), but he may have taken his efforts too far. Brooke will shout that this is kidnapping.

Bill will urge Brooke to cut the melodrama. He’ll maintain that he’s just being a good parent. The Bold and the Beautiful spoilers say Brooke will want Bill and Katie (Heather Tom) find a solution. There’s surely a better approach. Keep watching to see if they’ll be willing to make some compromises.

Elsewhere, Deacon (Sean Kanan) will attempt to talk some sense into Quinn (Rena Sofer). When Quinn got updates on Eric’s (John McCook) trip to Monte Carlo, it sparked an idea. Deacon will roll his eyes when he finds out Quinn intends on following Eric all the way to Monaco.

B&B spoilers state that Deacon will be perplexed by Quinn’s thought process. He’ll ask how a woman who’s so intelligent can be so naïve. Steffy (Jacqueline MacInnes Wood) has told Quinn in no uncertain terms that she’s to stay as far away as possible. How many times does Steffy have to go over this?

In reality, Steffy is wasting her breath. Now that Quinn has Eric in her life, she has no intention of avoiding the Forresters. Nevertheless, Quinn might suggest that she’s only going to Monte Carlo for Eric. She’ll want to surprise her new man and enjoy a little romance. Quinn won’t see the harm in that.

Unfortunately, Quinn’s plans always crash and burn. The Bold and the Beautiful spoilers reveal that Quinn will find herself in quite a jam soon. In the meantime, Liam (Scott Clifton) will open up to Eric about the situation with Steffy. He’ll insist that he’s worried about Quinn and all of her stunts.

Eric will should be pretty uncomfortable with this chat. He’s doing a decent job of hiding his relationship with Quinn, but it’s hard for him to constantly hear how terrible she is. Deep down, Eric undoubtedly wonders what in the world he’s doing. He knows Quinn is nuts, but he just can’t help himself.

Liam will vent about Quinn’s scheming and indicate that he doesn’t expect it to stop. B&B spoilers say Liam will feel confident that Quinn is going to push Steffy over the edge. He’ll hate the fact that Steffy will likely go through more turmoil, but he’ll admit there’s a silver lining.

Once Steffy decides she’s done putting up with Quinn’s madness, she may break things off with Wyatt. There’s no way Steffy can deal with her insane mother-in-law for the rest of her life. Liam will believe that Steffy may end up back where she belongs. Obviously, he means in his arms.

Will Steffy dump Wyatt and get back together with Liam? It definitely sounds like the storyline could be headed in that direction. Quinn’s actions could lead to bad news for her son. Stay tuned and don’t forget to check CDL often for the latest Bold and the Beautiful spoilers, updates and news.