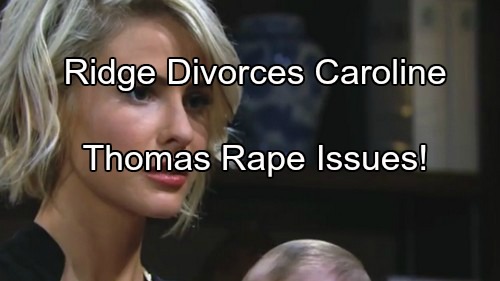 The Bold and the Beautiful (B&B) spoilers tease that Ridge (Thorsten Kaye) will realize he’s fighting a losing battle. In fact, it almost feels like Ridge has thrown in the towel already. He can tell that Caroline (Linsey Godfrey) and Thomas (Pierson Fode) are developing a strong bond.

Ridge will believe he’s standing in the way of a happy family. Instead of clinging to the love that’s left, Ridge will start pushing Caroline away. In Ridge’s mind, he’ll be doing what’s best for everyone. The Bold and the Beautiful spoilers say Ridge will tell Caroline that their marriage is over.

Related: Is Steffy in Danger From Quinn?

Caroline will undoubtedly be stunned by Ridge’s divorce bomb. She’s been trying to deny her feelings for Thomas. Caroline will likely admit that she’s reconnected with Thomas because of the baby, but she won’t think that means Ridge has to step back. She’s still willing to be a committed wife.

Of course, Ridge never settles for playing second fiddle. That’s especially true in this case. Ridge doesn’t want to go up against his son in a war for Caroline’s heart. He’d rather just move on and allow Caroline to move on, too.

Here’s where things might get controversial. Many Bold and the Beautiful viewers have always had a problem with Douglas’ conception. They didn’t show us the entire encounter, but it’s clear that Caroline was in no condition to give her consent that night.

Thomas didn’t know Caroline had mixed pills with booze, but her slurred speech and bizarre demeanor should’ve given him a clue that something was up. Unfortunately, Thomas was highly drunk as well. That kind of muddied the waters.

Caroline was horrified when she discovered that she’d slept with Thomas. She shouted that it wasn’t what she wanted. Thomas apologized profusely and insisted that he thought Caroline was on board. Since then, the show has changed the narrative somewhat.

Now Caroline is downplaying Thomas’ actions. That trend will continue as she revisits the events of that evening. Caroline will indicate that she’s just as responsible for her hookup with Thomas. She’ll hint that maybe she wanted it to happen deep down.

We’re obviously getting into a tricky area since some fans have cried rape from the get-go. The lines are blurred, so it’s risky to take this route. It seems like B&B would be better off ignoring Douglas’ conception. They probably should’ve kept going and focused on how Caroline feels about Thomas at the moment.

Nevertheless, The Bold and the Beautiful plans on addressing the issue once more. Hopefully, they’ll get it all out in the open and put the whole thing to rest. It was odd that they even went the borderline rape direction in the first place.

Wouldn’t the storyline have worked just fine if Caroline had been alert and coherent? She could’ve simply engaged in rebound sex with Thomas. It’s common after a breakup on a soap. Caroline would’ve still regretted it the next morning, but Thomas would’ve come out looking a little less creepy.

Now the show is trying to repair the damage in order to make Thomas a viable love interest for Caroline. Will their efforts pay off? We’ll give you updates as other news emerges. Stay tuned to B&B and don’t forget to check CDL often for the latest Bold and the Beautiful spoilers, updates and news.