The Bold and the Beautiful (B&B) Spoilers: Quinn Crosses Another Line with Liam – Is it Sex, Drugs or Death? 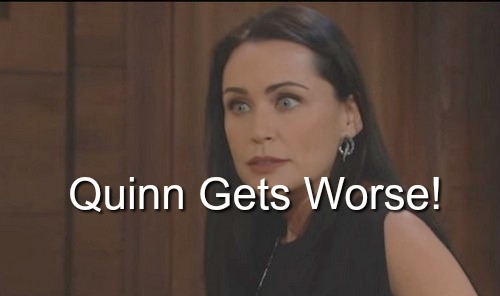 “The Bold and The Beautiful” (B&B) spoilers tease that what’s happening between Quinn Fuller (Rena Sofer) and Liam Spencer (Scott Clifton) up in that cabin is only going to get twistier and ickier as time passes.

Liam has no clue who he is or who Quinn is – he just thinks she’s a beautiful caretaker. He’s already kissed her hand which we saw visibly made Quinn’s skin crawl, but she may soon rethink her strategy and take advantage of Liam’s attraction to her.

Quinn was trying to buy just a little time, but when she hears from Wyatt Spencer (Darin Brooks) that he and Steffy Forrester (Jacqueline MacInnes Wood) are really hitting it off, she decides to step up her game to keep Liam out of LA a little longer.

Quinn has a few choices available to her – she could kill Liam in his weakened state and throw him off a cliff or dump his body in the woods. She has tried to kill him before, after all. But we also saw that Quinn had some flashbacks about that violence and seemed to regret that extreme.

Looks like Liam will survive the close encounter with Quinn physically intact. Quinn could drug him into submission, but does she have any good pills in her purse? With Quinn, you never know what she’s packing…

But the most obvious choice is for Quinn to indulge the attraction that Liam feels for her. After all, Liam is brother to her son, but she’s never been a mother to him – she didn’t know Liam until he was a grown man. It’s still dicey territory though.

But we also have to recall that Quinn told Wyatt recently that there’s nothing like a Spencer man… This is all veering into pretty cringe-worthy territory, but B&B has been known to explore plotlines that make us shudder, so why not?

What’s really worrisome about this is that Quinn may flirt and play along with Liam, but if he makes a move, she may find herself responding to him. Could Quinn and Liam end up in flagrante together? And imagine the horror for Liam if he woke up naked with Quinn with his memory restored.

Liam doesn’t like Quinn and she has a history of terrifying him so the notion that he slept with her could really drive him over the edge. Plus, Liam will not want Steffy to know that he shagged Wyatt’s mom. Quinn could snap a couple of selfies of them in bed as blackmail assurance.

For Quinn, she knows that Wyatt would be horrified that she shagged his brother, but that would be balanced out if he gets to keep Steffy. What’s really scary about all this is that sex is not the worst possible result of this cabin kidnapping.

The worst outcome is if Quinn and Liam fell for each other… Imagine Bill Spencer’s (Don Diamont) horror if his son professed love for his other son’s mama. A “Quiam” romance would shock everyone at Spencer Publications and Forrester Creations – and it could happen.

What do you think B&B fans? Will Quinn allow Liam to seduce her despite her qualms at his obvious attraction to her? How far will Quinn go to see her son happy? Is shagging his brother too far? Share your comments below and check back with CDL often for more “The Bold and The Beautiful” spoilers.