‘The Bold and the Beautiful’ Spoilers: Brooke Stands Up to Bill, Defends Katie in Custody Battle – Wyatt Irked by Quinn’s Antics 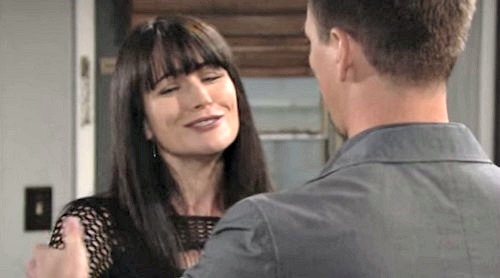 The Bold and the Beautiful (B&B) spoilers for Thursday, July 21, tease that Brooke (Katherine Kelly Lang) will stand up to Bill (Don Diamont). She’ll insist that keeping Will (Zane Achor) from his mother is wrong. Brooke will declare that she won’t allow it.

Bill will disagree, but we all know Brooke is his weakness. Perhaps Brooke will at least nudge Bill in the right direction as far as the custody battle goes. Later, Katie (Heather Tom) will confront Bill about Will’s whereabouts. She’ll demand to know what Bill has done with her son.

A huge fight will ensue, but Brooke will do her best to smooth things over. The Bold and the Beautiful spoilers say Brooke will support Katie’s argument. Katie will wonder why Brooke is even getting involved in this. She already told her sister goodbye.

Brooke will be determined to fix this for Katie. She’ll feel terrible about messing everything up, but she’ll be convinced that there’s still hope. Will Brooke help Katie get Will back? Stay tuned to see what Brooke will be able to accomplish.

In the meantime, we’ll see Wyatt (Darin Brooks) grill Quinn (Rena Sofer) about her latest stunt. He’ll be confused about why Quinn came to Forrester dressed like a Russian guy. Quinn never ceases to amaze Wyatt with all of her wacky schemes.

Of course, Wyatt won’t be amused by Quinn’s antics. She’ll contend that she wouldn’t have gotten very far if she showed up as herself. Wyatt will suggest that the disguise isn’t the point. He warned Quinn to stay away from the Forresters, but his orders obviously didn’t sink in.

Wyatt will state that he loves Quinn, but he hates that she keeps putting him in this position. Steffy (Jacqueline MacInnes Wood) hates Quinn’s guts. She wants nothing to do with her mother-in-law. Quinn isn’t making Wyatt’s life any easier by seeking out Steffy and her family.

It’s worth pointing out that this confrontation won’t be particularly harsh. When Wyatt speaks to Quinn, he never seems to lay down the law. It’s like someone who feels too guilty to scold a puppy. That’s fine, but don’t be surprised when the pup causes more mischief.

Quinn gets away with more than she should, but many B&B viewers wouldn’t have it any other way. She’ll soon have another chance to stir up trouble in Monaco. The Bold and the Beautiful spoilers say Wyatt and Steffy will ask Eric (John McCook) to serve as guest speaker for the Spencer Summit.

Naturally, Quinn will make plans to follow once she becomes privy to the news. She’ll book a flight to Monte Carlo in hopes of surprising her lover. B&B fans will see some shocking moments during this trip. That’s to be expected with Quinn and her travels. Chaos follows Quinn everywhere!

It sounds like several can’t-miss episodes are coming up. We’ll give you updates on the twists and turns ahead. Stay tuned and don’t forget to check CDL often for the latest Bold and the Beautiful spoilers, updates and news.