The Bold and the Beautiful (B&B) Spoilers: Bill Teams Up with Justin to Find Liam, Steffy Helps – Leads to Marriage Annulment 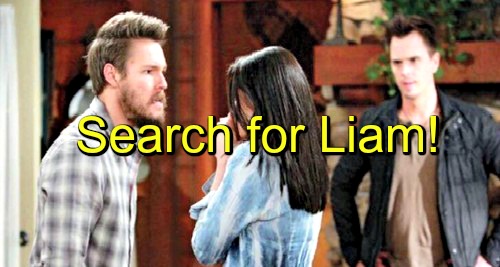 “The Bold and the Beautiful” (B&B) spoilers for next week’s episodes reveal that Forrester Creations will be buzzing over Steffy’s (Jacqueline MacInnes Wood) marriage to Wyatt (Darin Brooks). Pam (Alley Mills) will guess that means Steffy is really over Liam (Scott Clifton).

Brooke (Katherine Kelly Lang) will chime in on how strange it is that nobody’s heard from Steffy’s former flame. It’s like Liam just vanished into thin air.

Other B&B characters will grow suspicious of this situation, too. “The Bold and the Beautiful” spoilers indicate that Bill (Don Diamont) will finally realize something must be up. Bill obviously doesn’t know his son very well if it’s taken him this long to get a clue. At least Bill is taking action now. Better late than never!

Bill will call Justin (Aaron D. Spears) and ask for his help. They’ll discuss Liam’s disappearance and try to form a plan to bring him home. It looks like they’ll be starting their own little search party. Later, Bill will determine that they need backup.

They’ll turn to the person who probably knows Liam best. B&B spoilers say that Bill will ask Steffy to assist them in their efforts.

This could be tricky for a torn Steffy. Before the wedding, Steffy desperately wanted to track down Liam and get some answers. However, Steffy has now moved on with Liam’s brother. By helping Bill, Steffy may be forced to admit that she jumped to the wrong conclusion.

Nevertheless, Steffy still cares about Liam and she’ll want to make sure he’s OK. If Bill needs Steffy’s help to make that happen, then it’s tough to believe she’d opt out. Once the truth is exposed, Steffy could end up battling extreme regret and a marriage annulment.

Will Steffy and Wyatt’s marriage be annulled or will Steffy decide she has to give her new hubby a shot? We’ll have to wait and see, but it’s clear that things are going to get quite complicated. Stick with “The Bold and the Beautiful” for updates on what the future holds.

So B&B fans, what do you think about the news that Bill will seek assistance in his quest to find Liam? Will Steffy feel guilty when she learns Quinn had Liam the whole time? Is Steffy’s relationship with Wyatt destined to fail?