The Bold and the Beautiful (B&B) Spoilers: Week of April 4 – Quinn Caught with Liam, Wyatt Furious – All Hell Breaks Loose 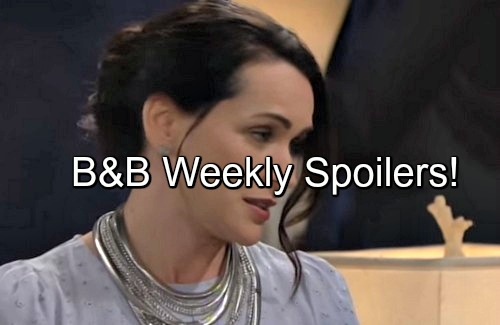 “The Bold and The Beautiful” (B&B) spoilers for next week’s episodes from Monday, April 4, to Friday, April 8, include lots of Liam action with his memory issues plus Brooke and Katie drama bubbling over. The end of next week brings major drama!

Steffy Forrester (Jacqueline MacInnes Wood) and Wyatt Spencer (Darin Brooks) bask in being man and wife – at least for a moment. Quinn Fuller (Rena Sofer) tells her son she would do anything for him to make this wedding happen. She means that – literally anything!

The Bold and the Beautiful spoilers tell us that at the cabin, Liam demands answers from Quinn since he now has the sketch of Steffy and is convinced Quinn is not being honest with him. The little pieces of memory he has back are actually making things worse on Liam. 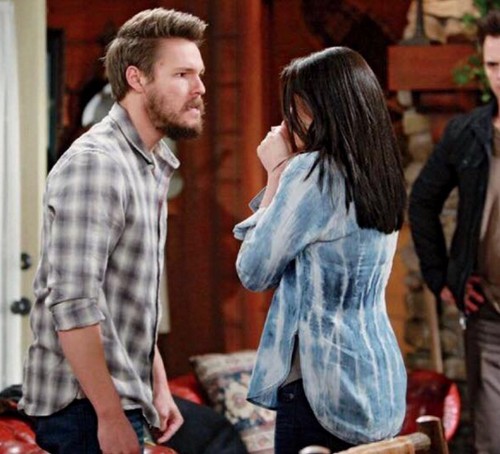 After Liam pushes, we see a glimpse of the “old” Quinn when she lashes out at him. Liam is stunned since his “Eve” has never been cruel to him. Looks like Quinn is turning dark on him and this is not the worst of what he’ll see this week.

B&B spoilers say Bill Spencer (Don Diamont) calls in Justin Barber (Aaron D Spears) to look for Liam since he’s begun to be concerned. Wyatt is also concerned and wonders why his mom didn’t bring her new guy to the wedding and goes up the cabin to see her and is shocked by what he finds.

Bill also talks to Steffy about what Liam might be up to and they discuss theories of what might be going on with his other son. Wyatt is stunned to see Liam at the cabin and it will be a hot minute before Liam recalls that’s his brother.

Quinn is there too when Wyatt shows up and the jig is up. Quinn tries a Hail Mary pass to stop the inevitable and keep her son from turning on her. Looks like it will not work. Does Quinn imprison the brothers at the cabin?

B&B spoilers indicate Wyatt and Liam team up to try and get home – does that mean they may be trapped? They turn the tables on Quinn. When Liam’s memory comes back, he’s overwhelmed. Will he tell Wyatt that he’s sleeping with his mother?

Also, Brooke catches Katie Logan (Heather Tom) secretly boozing again even though she reassured Bill she’s off the sauce. Katie pleads with Brooke not to spill to Bill because it will wreck her marriage. Katie tries guilt to get Brooke to do what she wants.

Don’t miss a moment of the new episodes and B&B action from Monday, April 4 through Friday, April 8, and check back with CDL every day for more “The Bold and The Beautiful” spoilers and news.