The Bold and the Beautiful (B&B) Spoilers: Quinn Arrested for Liam Kidnapping – Can She Escape Justice? 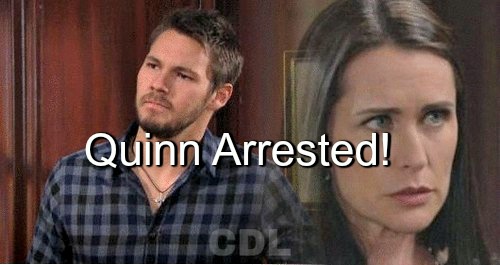 “The Bold and The Beautiful” (B&B) spoilers reveal that on next week’s episodes after Wyatt Spencer (Darin Brooks) is stunned to find Liam Spencer (Scott Clifton) holed up at his mom Quinn Fuller’s (Rena Sofer) cabin and brain addled, it will be the start of a fast downhill tumble for Quinn.

Liam’s memory has been teetering on recovery despite Quinn’s best efforts to keep him forever in the dark and Wyatt’s appearance will snap him out of it and Liam’s memory will return – and with it, the revelation of what he’s been doing there with Quinn, his brother’s mother.

B&B spoilers reveal that Liam and Wyatt will be a united front against Quinn which will stun her. At this point, Quinn truly loves both the brothers – one as a son and one as a lover – as icky as that is to reconcile. And trust us, Wyatt will struggle to reconcile that – as will Liam.

It’s all too much for them to handle. Even if Wyatt would hesitate to see his mother in handcuffs, Bill Spencer (Don Diamont) will not. Bill will soon send Justin Barber (Aaron D Spears) looking for Liam so Justin may not be too far behind Wyatt in the discovery of Liam at the cabin.

The Bold and the Beautiful spoilers say that we can expect Bill to push for Quinn’s arrest and punishment. He will be disgusted by her brother loving – even though Bill is a notorious sister lover himself. Oh, the hypocrisy and irony… But Bill will strong arm his sons into calling the cops on Quinn – if they have not done so already.

If Deacon Sharpe (Sean Kanan) turns up soon, Quinn’s kidnapping arrest may be compounded by an attempted murder charge. We all know Deacon isn’t dead, but will he return angry and be the one who could put the last nail in Quinn’s legal coffin? 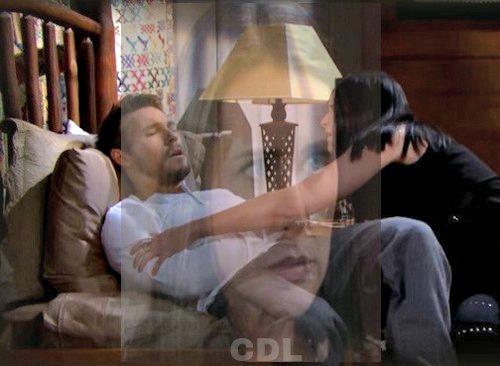 But there could be a mitigating factor (or two) in how Quinn is dealt with. Deacon’s accusation could be dismissed since there were no witnesses to her assault – it’s a he-said, she-said…But with the Liam kidnapping accusation, a couple of things could work in her favor.

First, will Liam struggle with residual feelings for Quinn? Now that Steffy Forrester (Jacqueline MacInnes Wood) is married to his brother, will Liam just let Steffy and Wyatt be happy? If so, that frees him up to consider what happened between him and Quinn.

Adam fell for Eve – will Liam still feel the pull towards Quinn and consider dropping the charges? Also, what if Quinn is pregnant? There has been some foreshadowing of that outcome and it’s hard to imagine Liam leaving the mother of his baby behind bars – if she turns up preggers.

Ultimately, while Bill is vengeful, Liam is not. It seems doubtful that Liam would go through with prosecuting Quinn for his kidnapping. Because, really, he was free to go at any time and she was taking good care of him.

Now, you could argue that Quinn denied Liam medical care, but aside from his addled brain, he was perfectly healthy. Quinn can rationalize the hell out of what she’s done, but it will all be down to how Liam perceives her.

Will we see Quinn declare her love for Liam and witness Wyatt’s stunned reaction? Will Liam be outraged at his unintentional brother mother loving, but then be unable to get Quinn out of his mind? Although some B&B fans have been horrified by the Quiam storyline, it’s compelling.

Bringing Quinn and Liam into the character canvas as a legitimate couple would be incredible. How awkward would those family dinners be? And how much more so if Quinn was carrying Liam’s child? There’s so much more plot to be explored here – let’s hope B&B sticks with it.

What do you think B&B fans? Will Quinn be able to evade justice after her arrest? Will it be her “Adam” that rides to her rescue because he can’t quit her? Share your comments below and come back to CDL often for more “The Bold and The Beautiful” spoilers and news.