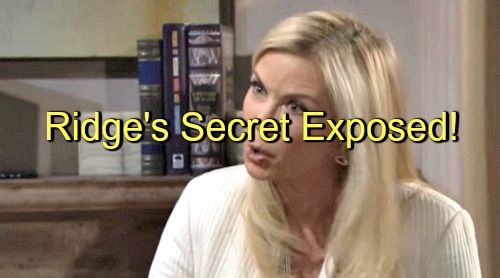 “The Bold and the Beautiful” (B&B) spoilers tease on next week’s episodes Brooke (Katherine Kelly Lang) will let Rick (Jacob Young) in on a huge secret about Ridge (Thorsten Kaye). We don’t know for sure what Brooke will spill, but there’s a good chance it will be about Ridge’s vasectomy.

The Bold and the Beautiful spoilers hint that perhaps Brooke will mention the fact that it’s a miracle Ridge and Caroline (Linsey Godfrey) are even having a baby. That might prompt Rick to ask Brooke for clarification.

When pressed, Brooke may admit that Ridge had a vasectomy and was originally told there would be no point in reversing it. Ridge’s doctor informed him that he was basically infertile. However, Ridge’s cover story is that the doctor was mistaken and he had it reversed after all. Brooke might suggest that the Caroline and Ridge are lucky that it worked out.

Of course, B&B spoilers claim Rick would think the whole thing sounds fishy. He may decide this is worth doing a little research on. In the soap world, it wouldn’t take that much work to find out if Ridge actually had the procedure done. What’s confidential in real life is easily accessible on a show like “The Bold and the Beautiful.”

If nothing else, Rick could simply hang out behind an ajar door while Ridge and Caroline are talking. Eavesdropping is the easiest way to find out a secret on B&B. Bottom line, it seems likely that Rick will soon be in the loop on the baby drama. It’s just a matter of time until Rick realizes there’s no way Ridge is this child’s father.

We also have to keep in mind that Rick currently hates Ridge’s guts. Rick threw a temper tantrum when Ridge took down Maya’s (Karla Mosley) portrait. His anger erupted when Ridge and Caroline made themselves at home in the mansion. Rick could be gearing up for the ultimate revenge.

As for Caroline, it’s unfortunate she’ll be caught in the middle of all of this. Nevertheless, Rick is probably still mad about Caroline falling for Ridge during their marriage. Those painful memories might sweeten the pot in Rick’s plan for vengeance. Sooner or later, Rick could drop the bomb on everyone.

Even if Rick doesn’t realize who the father is, Thomas (Pierson Fode) certainly will. A small part of Thomas might even suspect it already. Once Thomas learns Ridge can’t be the “baby daddy,” he’ll figure out that Caroline’s child is his son rather than his half-brother. It could be a doozy of a climax for this storyline. Stick with “The Bold and the Beautiful” spoilers for updates on the epic moments ahead.

So B&B spoilers fans, what do you think about the secret spillage? Will Brooke blab about Ridge’s vasectomy? Will Rick reveal the news to everyone out of spite? Voice your opinion in the comments below and don’t forget to check CDL often for the latest “Bold and the Beautiful” spoilers, updates and news.