The Bold and the Beautiful (B&B) Spoilers: Liam Recovers Memory – Rushes to Stop Steffy-Wyatt Wedding – Will He Be Too Late? 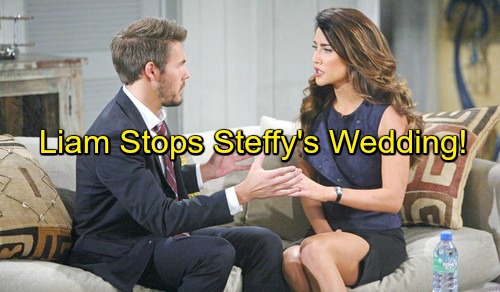 “The Bold and The Beautiful” (B&B) spoilers indicate that Liam Spencer (Scott Clifton) will not be willing to accept Quinn Fuller’s (Rena Sofer) vague answers about his past for many more episodes. Will his digging help recover his memory in time to wreak havoc at the Steffy-Wyatt wedding?

B&B spoilers hint that Steffy Forrester (Jacqueline MacInnes Wood) and Wyatt Spencer (Darin Brooks) will be ready to walk down the aisle by the end of the month. Chaz Bono has been cast as a minister on B&B, likely for their nuptials, for two episodes on March 31 and April 1.

Does this mean that Liam will get his memories back in time to show up and disrupt the wedding of his fiancée and brother? The Bold and the Beautiful spoilers ask if there a big April Fool’s Day wedding debacle in the works? Steffy is totally disenchanted with Liam since his disappearance.

Liam’s rude texts and voice mail have convinced her that he’s really done with her and Spencer family members seem to think he’s gone walkabout in Australia to “find himself.” What’s ironic is that Liam is very close to home yet still desperate to find himself.

Right now, Liam’s amnesia persists and in this week’s episodes when Quinn  shows him a photo album of pictures that Deacon Sharpe (Sean Kanan) has mocked up, we have to wonder if that will satisfy Liam or spur more questions.

The easiest way for Deacon to photoshop pics is to use snaps of Quinn and someone else – or Liam and someone else – and just paste in one of their heads. But if Deacon used any of Steffy and Liam and replaced the fiancée with the fake wife, that could cause a problem.

Bold and Beautiful spoilers ask if will Liam see a scene that he recalls but the woman that he’s seeing in his head is not Quinn – but Steffy? B&B spoilers tease that the faux photo album may not be the good idea that Quinn thought and Liam will soon suspect that something shady is going on.

Also, the Australia story will fall apart once Ivy Forrester (Ashleigh Brewer) gets back to LA. Ivy knows for sure that Liam got back on a plane and came back to California. Ivy will clear that up right away which will have the Spencers and Forresters wondering where he is.

For Steffy, though, she may pessimistically think that it doesn’t matter where he is, since he clearly doesn’t want her… Will Ivy show up to Quinn’s cabin and find Liam there? Will it be Ivy that fills Liam in on his true past and helps him snap out of his mental fog?

And we have to wonder, even if Liam does show up to the nuptials, will Steffy still go through with it and marry Wyatt? What do you think B&B fans, will Liam wedding crash his brother’s big day and ruin it for Wyatt?

Is Wyatt destined to be unlucky in love again? Will Wyatt finally get a woman he wants – or will Liam win Steffy back just by showing up? Share your comments below and come back to CDL for more “The Bold and The Beautiful” for more spoilers and news.