BY Heather Hughes on May 25, 2016 | Comments: 2 comments
Related : Soap Opera, Spoiler, Television, The Bold and the Beautiful 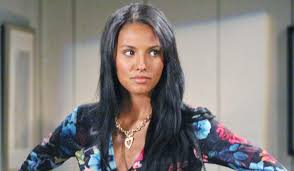 “The Bold and the Beautiful” (B&B) spoilers tease that the CBS soap is on the hunt for another character. According to Soap Opera Digest, B&B issued a casting call for the new contract role of Kat. She’s a 20-year-old woman with a great sense of style. Plus, Kat is creative and quite stunning. Would we expect anything less from one of this show’s beauties?

We should also point out that they’re looking for a brunette who’s 5’5” or taller. Perhaps the height requirement is a sign that modeling is in Kat’s future. Forrester Creations is always in need of gorgeous ladies for photo shoots and various fashion events.

Regardless, “The Bold and the Beautiful” is hoping to add another young cast member. They appear to be having some success with their youthful additions lately. Nicole (Reign Edwards) certainly made a splash when she came on the scene and exposed Maya’s (Karla Mosley) secret.

Later, Nicole faced off against her parents and ended up being a surrogate for Maya. Reign Edwards was nominated for a Daytime Emmy, which suggests that the show did something right in terms of casting. Of course, B&B fans don’t seem to mind Zende (Rome Flynn) either. He hasn’t been the best boyfriend, but he’s handsome and charming enough to keep viewers interested.

Sasha (Felisha Cooper) turned the duo into a love triangle and she even came to town toting a secret of her own. We watched the Avants face chaos thanks to the revelation that Sasha is actually Julius’ (Obba Babatunde) daughter. There’s sure to be lingering tension among these family members as they continue to deal with the aftermath.

Sasha is now stirring up trouble thanks to her pregnancy news, which may or may not be true. Either way, Sasha has been the perfect frenemy for Nicole and she added a much-needed spark to the storyline. Due to her age, Kat sounds like she would run in the same crowd as Sasha, Nicole and Zende.

However, one guy can’t juggle this many girls. (Well…Zende could, but he shouldn’t.) Does “The Bold and the Beautiful” have plans to add a young hunk, too? It wouldn’t be surprising. The show is obviously making an effort to draw in younger viewers. We’ll give you updates on Kat and any other newbies headed to the world of fashion.

So B&B fans, what do you think about the casting call for Kat? Who will she be paired with? Will Zende move on from Nicole and Sasha? Will they bring in someone new for Kat instead? Voice your opinion in the comments below and don’t forget to check CDL often for the latest “Bold and the Beautiful” spoilers, updates and news.