The Bold and the Beautiful (B&B) Spoilers: Deacon Falls Over Cliff or Pushed by Scheming Quinn – Sean Kanan Killed Off? 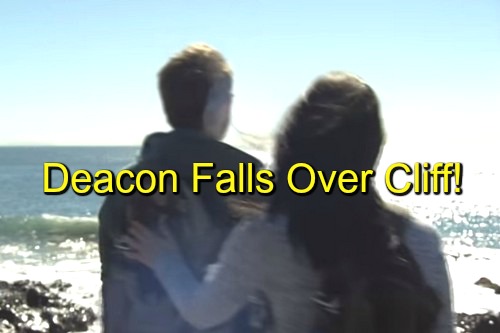 “The Bold and the Beautiful” (B&B) spoilers reveal that Quinn (Rena Sofer) will guide Liam (Scott Clifton) up to the cliff where she ostensibly plans to murder him. Of course, Deacon (Sean Kanan) will also be involved in this devious plot.

Quinn is afraid she won’t have the guts to go through with it if Deacon doesn’t help her out. Besides, Deacon will provide greater strength and the element of surprise.

The Bold and the Beautiful spoilers tell us Quinn believes this is the perfect plan, but when do her schemes ever really work out? Sooner or later, something always goes wrong and we’re rapidly approaching that moment.

It’s doubtful that Scott Clifton is going anywhere, which means Liam probably isn’t headed over the edge. However, another B&B character could easily take the plunge.

Although it’s possible Quinn could become the victim of her own plot, it doesn’t seem likely. First of all, we wouldn’t get a very good payoff for this storyline if that happened. We would be robbed of the fallout of everything Quinn has done. There would be no explosive confrontations once Liam regained his memory. Where’s the fun in that?!

If Liam and Quinn keep both feet on the ground, that would leave Deacon as the most logical tumbler. Sean Kanan was dropped to recurring status and he’s currently pursuing other projects.

Kanan’s Wikipedia page says he has a movie in pre-production called “The Hack.” Kanan is set to play a character named Chad Cooper, so it sounds like he’s finding work elsewhere.

Plus, it’s been a while since “The Bold and the Beautiful” gave viewers a real shock. Even if we suspect it might be coming, killing Deacon off would still drop some jaws. Perhaps Liam could move too quickly and Deacon could stumble off the ledge in his place.

There’s even a chance that Quinn will change her mind and give Deacon a shove instead of Liam. After all, Deacon is the only one who knows that Quinn has been keeping Liam stashed away from society. Regardless, Quinn might try to make the best of a bad situation.

It would be tough for Quinn to watch her ex-husband plummet to his death, but it could make her realize that she wants to hold on to “Adam” for as long as she can. Quinn might make gullible Liam believe that Deacon (aka “Jim”) was just a crazy stalker.

In other words, Quinn’s scheme may not be over just yet. Stick with “The Bold and the Beautiful” for updates on the chaos ahead.

So B&B spoilers fans, what do you think about the news that a catastrophe could be brewing? Will Deacon be killed off? Voice your opinion in the comments below and don’t forget to check CDL often for the latest “Bold and the Beautiful” spoilers, updates and news.