‘The Bold and the Beautiful’ Spoilers: Does Quinn Just Want Money and Power or Is She Really in Love with Eric? 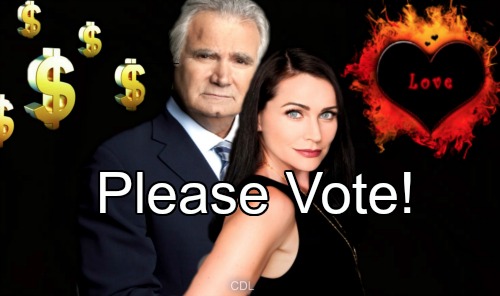 The Bold and the Beautiful (B&B) spoilers tease that Eric (John McCook) will expect a bright future in both his personal and professional life. He feels like he’s made the right call by bringing Quinn (Rena Sofer) back at Forrester Creations. Eric expects at they’ll crush the competition and enjoy each other’s company at the same time.

However, we have to wonder what Quinn’s main motive is. When Quinn first got together with Eric, she intended on gaining acceptance into the Forrester clan. Quinn was determined to get closer to Steffy’s (Jacqueline MacInnes Wood) family and maybe win her over in the process.

Of course, that was just a silly dream of Quinn’s. The Forresters want nothing to do with her and that’s probably not going to change. Luckily, Quinn has other goals she can fall back on.

There’s undoubtedly a piece of Quinn that sees Eric has her ticket to money and power. B&B fans can see those wheels turning in Quinn’s brain. The Bold and the Beautiful doesn’t usually allow Quinn to be completely innocent in anything she does.

Just look at how much Eric is already doing for Quinn. She’s returning to her old job and Eric is singing her praises around the office. We can’t forget that Quinn talked Eric into reclaiming the CEO position either. It looks like Quinn had everything all planned out in the back of her mind.

Now Eric will give Quinn anything and everything she needs. The sky’s the limit for his sweetie! Steffy, Ridge (Thorsten Kaye), Rick (Jacob Young) and the rest of the team are furious at Eric for letting Quinn manipulate him. They believe Quinn targeted Eric as her sugar daddy and another way to invade Steffy’s life.

Unfortunately, Quinn has made a huge mess and Wyatt’s (Darin Brooks) marriage may fall apart. Quinn cares about her son, but she just can’t help herself when it comes to twisted plans. Quinn can’t resist stirring up trouble if it benefits her somehow.

Still, Quinn seems to have genuine feelings for Eric. Maybe this started out as a simple scheme, but Quinn appears to have some love in her heart now. Quinn formed a plot involving Liam (Scott Clifton) and ultimately fell for him. The same thing likely took place with Eric. This may be a doomed pattern of Quinn’s.

The Bold and the Beautiful viewers will be anxious to see the chaos ahead. If Quinn doesn’t inadvertently sabotage herself, then someone else will do it for her. All of the Forresters are prepared to take Quinn down. We’ll give you updates as more news emerges on their efforts.

Do you think Quinn is only after Eric’s money and power or does she actually love him? Cast your vote in our B&B poll and chime in with your thoughts in the comments. Stay tuned and don’t forget to check CDL often for the latest Bold and the Beautiful spoilers, updates and news.