The Bold and The Beautiful Spoilers: Dollar Bill and Thomas Side With Eric in Forrester War – Steffy, Ridge and Rick Crushed

New The Bold and The Beautiful (B&B) spoilers reveal that a Forrester family war is brewing and it will be surprising who takes sides against Eric Forrester (John McCook) and who decides to stand behind the family patriarch. Can Eric keep control of the family business?

After Eric announced he was rehiring Quinn Fuller (Rena Sofer) at Forrester to head the jewelry division again, his family went into shock and Eric is also going to make it clear that he’s keeping Quinn in his life romantically as well.

Steffy Forrester (Jacqueline Wood) pitches a big fit but Eric won’t listen. Once Eric and Quinn leave, though, the battle lines are drawn when Ridge Forrester (Thorsten Kaye) begins to scheme with Steffy on how to regain control of the company. 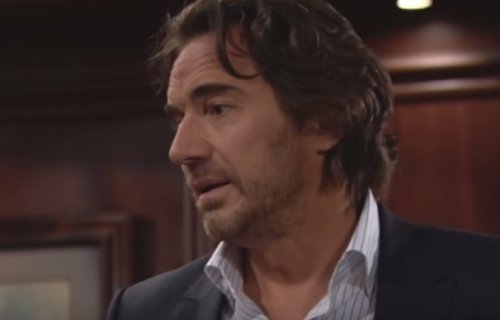 From their perspective, Quinn is snowing Eric and is planning to take over the family business while setting Eric up for heartbreak. Although the Forresters are wrong about Quinn – she has truly fallen for Eric and is sincere – unfortunately, no one will believe it.

Because the Forresters think Eric is tainted by his attachment to Quinn, they want him out of the CEO chair ASAP. But there’s some math involved. Eric owns just 37.5% of his family business. That’s not a majority but he is the single biggest shareholder.

Steffy and Ridge together own 45% of the company and that’s not enough to force Eric out. The other two shareholders are Thomas Forrester (Pierson Fodé) with 5% and Bill Spencer (Don Diamont) with 12.5%.

To keep control of the family business, Eric needs Thomas and Dollar Bill on his side. Ridge is trying to get Katie Logan (Heather Tom) to demand the Forrester shares as her divorce settlement and is leaning heavily on her to take what’s good for him.

Bill might be inclined to hand over the shares to Katie, but not if she’s going to use them to help out Ridge since Bill hates Ridge. Katie was scared of a messy court battle, but Ridge promised her that he and Brooke Logan (Katherine Lang) would testify on her behalf.

Bill has plenty of motivation to side with Eric – mostly because it would thwart what Ridge wants and any day that Dollar Bill can screw over Ridge is a good day for him. But what about Thomas? There are a number of reasons Thomas would side with his granddad. 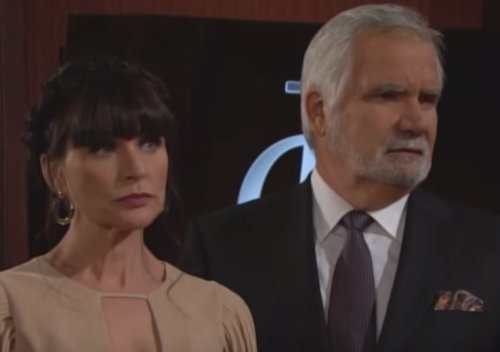 Although Ridge is going through a painful divorce and Thomas feels bad about it, Thomas was deeply hurt by his father’s actions towards him over Douglas’ paternity lie. Plus, Thomas will see that Eric and Quinn really love each other and that will sway him.

Thomas was just talking to Sasha Thompson (Felisha Cooper) about the importance of a father’s love after Julius Avant (Obba Babatunde) was such a jerk to her. Thomas has felt the sting of Ridge’s rejection many times but his granddad Eric has always been good to him.

While Rick Forrester (Jacob Young) doesn’t have any shares to throw into the ring, The Bold and The Beautiful spoilers reveal that he and Ridge will put aside their dislike for one another to battle the common enemy – and kick Eric out of Forrester Creations. 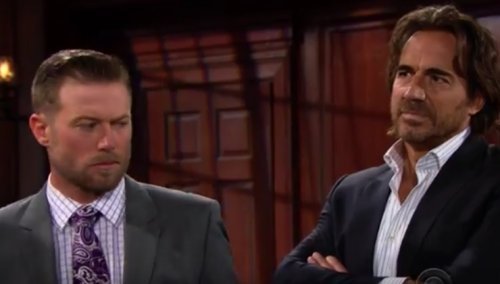 Eric is already furious that Ridge and Steffy are making ultimatums and treating him like an imbecile. When they try and make a power play to unseat him from the CEO chair, Eric will snap and go on the warpath. Eric will kick Ridge out of the family mansion for starters.

From there, with Bill and Thomas on his side, Eric can fight back and defeat Steffy, Ridge and Rick but there will be hurt feelings all around. Also, Ivy Forrester (Ashleigh Brewer) is back to LA by the end of the month, so will she side with her Uncle Eric? It seems likely since she’s no fan of Steffy…

This civil war could fracture the Forresters for good. The only way to keep this from wrecking both the family and the family business is for Steffy, Ridge and Rick to back down and accept that Quinn and Eric are a couple at work and in their personal lives.

But it’s doubtful that will happen – they see Quinn as the worst thing to ever happen to Eric and won’t quit. What do you think B&B fans? Will either side back down or will it be all-out war with the family members choosing sides? Can Eric win and keep his company and Quinn?

Share your comments below and check back with CDL often for all the latest The Bold and The Beautiful spoilers and news.