BY Heather Hughes on May 28, 2016 | Comments: 4 comments
Related : Soap Opera, Spoiler, Television, The Bold and the Beautiful 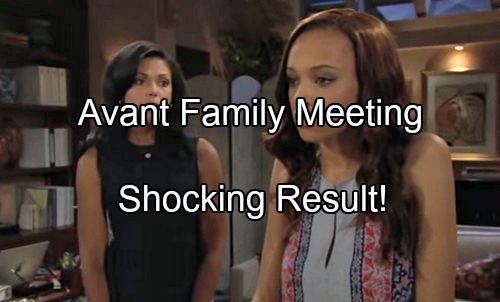 “The Bold and the Beautiful” (B&B) spoilers tease that on next week’s episodes Julius (Obba Babatunde) will grow tired of all the Avant chaos. This group is always dealing with problems, although Julius has certainly caused his fair share of them. Nevertheless, Julius will hope that he can take charge and calm things down.

At Julius’ request, everyone will gather for a family meeting. Julius realizes that there’s major drama going on amongst his daughters. Sasha (Felisha Cooper) continues to turn Nicole’s (Reign Edwards) life upside down. Maya (Karla Mosley) is being a protective big sis as she tries to help Nicole work through this crisis.

As for Sasha, she’s obviously not behaving like she wants to be accepted. Sasha is still being treated like an outsider and why wouldn’t she be? It seems Sasha only cares about keeping Zende (Rome Flynn) in her orbit. The Bold and the Beautiful spoilers say that Julius will push for peace in spite of any wrongdoing. That goes for his own actions as well.

Julius will want to reunite with Vivienne (Anna Maria Horsford) and finally settle back into his old life. He truly loves his wife, even if he has a funny way of showing it. “The Bold and the Beautiful” spoilers indicate that Vivienne will have a big decision to make. She’ll have to figure out if she’s going to accept Julius’ apology or dump him for good.

Vivienne’s choice will affect the rest of the family, too. This could bring them together or drive them apart. Vivienne is normally a kind and loyal person. She may have treated Maya harshly in the past, but she admitted she was wrong and tried to make it up to her. Besides, Julius was always rather controlling and Vivienne found it difficult to go against him.

Viv knows how to stand up for herself now, so that’s no longer an issue. She may determine that she’s willing to give her husband a second chance. On the other hand, Vivienne has been burned by the secret daughter mayhem. She was unbelievably hurt by the news that Julius had lied to her face for years.

If Vivienne tells Julius that she just can’t take him back, it could force Julius to strike a deal with Sasha. She’s mentioned it more than once on B&B, which might be significant. Julius may be desperate enough to work with someone as manipulative as Sasha if she can help him grow closer to Vivienne.

However, Julius had better be careful if he goes in this direction. The deal would have to go both ways. Sasha would need Nicole to keep her distance from Zende and she’d expect Julius to make it happen. Vivienne may never take Julius back if she finds out he schemed against his own flesh and blood.

Stick with the CBS soap for updates on Vivienne’s decision and any action it might prompt from Julius.