The Bold and the Beautiful (B&B) Spoilers: Liam Breaks Up With Steffy, Quits Forrester and Moves In With Bill 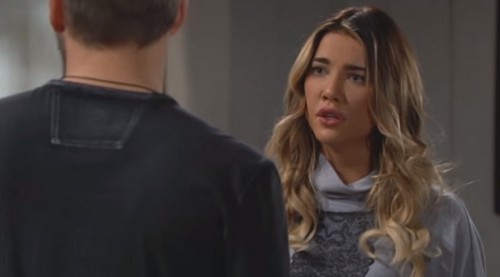 “The Bold and the Beautiful” spoilers for Tuesday, January 12, tease that Liam (Scott Clifton) and Steffy (Jacqueline MacInnes Wood) will have to deal with another round of confusion. Liam’s inadvertent trip to Australia already caused a major rift. Now Steffy and Wyatt’s (Darin Brooks) half-naked cuddle session is about to stir up even more trouble.

Liam will inevitably jump to the wrong conclusion and Steffy will be left to explain her actions. It looks like Liam will have some doubts about whether they still have a future together. “The Bold and the Beautiful” spoilers say Liam will tell Steffy that he’s not going back to Forrester.

He’ll add that he doesn’t want to see Steffy at home either. Liam will plan on staying with Bill (Don Diamont) until Steffy can get out of his hair.

It’s clear that Liam was deeply hurt by the sight of his brother and fiancée in the same bed. However, Katie (Heather Tom) will point out that Liam had a suspicious story as well. Bill will stand by his son, but Katie will insist that she’d be mad if Bill flew to Australia with one of his exes.

If Bill went on an unexpected trip with someone like Quinn (Rena Sofer), Katie will suggest they’d certainly be fighting about it.

Speaking of Quinn, she’ll want updates on what happened between Liam and Steffy. There’s a good chance that Quinn will try to use the drama to her son’s advantage. We all know how Quinn enjoys meddling in Wyatt’s love life. If Liam and Steffy are breaking up, she’ll undoubtedly capitalize on the opportunity.

Meanwhile, Brooke (Katherine Kelly Lang) will get started in her new position at Spencer Publications. Naturally, Brooke will be nervous about interacting with Bill. It seems Brooke will have difficulty controlling herself around the man she’s been pining for.

Unfortunately, Bill may not be able to resist his former flame either. Based on B&B’s weekly promo, it appears a kiss is coming for Bill and Brooke later this week. Unless Brooke is having a fantasy, this could mean bad news for Bill and Katie’s relationship.

Of course, Katie will have to find out first. Stick with “The Bold and the Beautiful” to see how this love triangle will heat up.

So B&B fans, what do you think about Liam and Steffy’s crumbling romance? Will Quinn help Wyatt take his shot with Steffy? Will Brooke and Bill have a fling? Will Katie end up heartbroken by betrayal?

Voice your opinion in the comments below and don’t forget to check CDL often for the latest “Bold and Beautiful” spoilers, updates and news.

The Bold and the Beautiful Video Promo for Tuesday, January 12 2016