The Bold and the Beautiful (B&B) Spoilers: Stress of Sasha Reveal as Julius’ Daughter Puts Nicole’s Pregnancy at Risk?

BY Monica DelRay on January 11, 2016 | Comments: one comment
Related : Soap Opera, Spoiler, Television, The Bold and the Beautiful 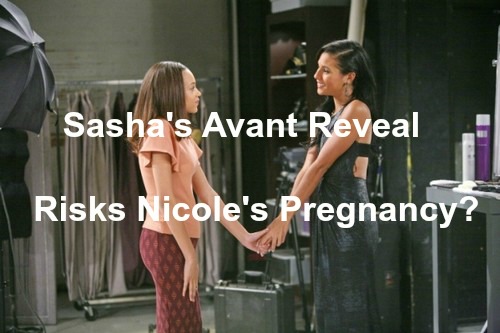 “The Bold and the Beautiful” (B&B) spoilers tease that Nicole Avant’s (Reign Edwards) pregnancy has already been trying for her, both physically and emotionally, but new drama with Sasha Avant (Felisha Cooper) could push Nicole to the limit.

B&B spoilers reveal that Sasha will soon get a job offer from Rick Forrester (Jacob Young) to model at Forrester Creations and that Nicole will sabotage the offer and get Sasha axed. This is what will trigger a chain of events leading up to the reveal that Sasha is her sister and a secret Avant.

Julius Avant (Obba Babatunde) is desperately trying to get Sasha to go back home and leave them alone – but it sounds like Sasha doesn’t have a home to go back to. This is really all down to Julius’ horrible treatment of Sasha – she’s had to fight for scraps of his attention for 18 years.

Sasha insisted she didn’t want to hurt Nicole or ruin her relationship with her, but when Nicole’s pregnancy hormones flare and she acts out horribly against Sasha, the dynamic changes. A Sasha with nothing to lose is a dangerous Sasha.

The question is how Sasha will go about getting her due and how it will affect Nicole’s health and the pregnancy. Will Sasha decide to take Nicole’s life apart bit by bit since she has everything that Sasha has always craved – including family, stability and opportunities?

How long will it be before Sasha announces to the other Avants that Julius is her daddy? And how will they handle it? Realistically, it’s not Sasha’s fault that their dad cheated with her mom. She’s a victim of her circumstances and Julius is the real villain in all of this.

If any of the Avants welcome Sasha with open arms after the reveal it should be Maya Avant (Karla Mosley) that’s first in line. After all, since she transitioned from Myron to Maya, Julius treated her badly for quite some time.

Maya has been on the receiving end of Julius’ ugly rejection so she should understand precisely how Sasha feels. Nicole, however, will be outraged that Sasha has been her BFF all this time when she was secretly her sister.

None of this is a situation of Sasha’s making but Nicole will likely not want to blame her beloved dad and will put it off on Sasha – that’s not fair. But Nicole is not in her right mind with all the hormones flooding her system and she will not behave reasonably.

And we have to wonder if all the coming stress will impact Nicole’s pregnancy for the negative. Seems like everyone at Forrester Creations (and Spencer Publications) has suffered at least one miscarriage – is that the fate Nicole faces?

If Nicole miscarries and her fertility is put in jeopardy, Julius will blame Maya for putting Nicole in the position and Sasha for stressing her out. Will all this end up with the Avants being split down the middle with Maya and Sasha, the two black sheep, on one side and Nicole and Julius on the other?

The introduction of Sasha’s character has added a delicious new dynamic to the Avants and, no matter what happens, will be compelling to watch. It’s about time that hypocritical Julius was exposed for the cad that he is. Which side will Vivienne Avant (Anna Maria Horsford) take?

What do you think B&B fans, are you ready to see Julius’ dirty laundry aired? Do you think Nicole is unfair to Sasha? Can the Avants survive this ugly mess intact as a family? Share your thoughts in the comments below and come back to CDL often for more “The Bold and The Beautiful” spoilers and news.