‘The Bold and the Beautiful’ (B&B) Spoilers: Ivy Claims Video Means She ‘Owns’ Steffy – Wyatt Works With Quinn and Ivy

BY Heather Hughes on August 23, 2015 | Comments: one comment
Related : Soap Opera, Spoiler, Television, The Bold and the Beautiful 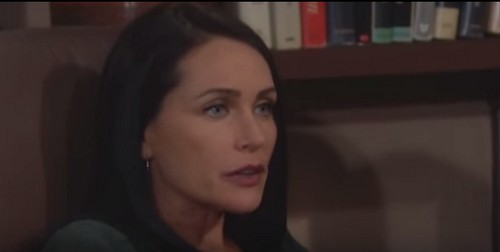 “The Bold and the Beautiful” spoilers for Monday, August 24, tease that Ivy (Ashleigh Brewer) will let Steffy (Jacqueline MacInnes Wood) know that the tide has turned. Steffy took Liam (Scott Clifton) and Aly (Ashlyn Pearce) away from Ivy. Now Steffy’s trying to take the lead model position away, too. However, Ivy is done playing games. This is war. Ivy will imply that as long as she’s got that video, she owns Steffy.

Steffy has been insistent that Ivy needs to respect her authority, but she might want to think about giving Ivy what she wants. Ivy has the power to snatch Steffy’s freedom if she goes to the police. With the push of a button, the cops could be convinced to press charges against Steffy and she could easily go to prison for her actions. Liam will vow to protect Steffy no matter what Ivy throws at them. Unfortunately, Liam may have a hard time keeping that promise if Ivy has anything to say about it.

Ivy may be in control of the situation with Steffy, but she’s about to face another dilemma with Quinn (Rena Sofer). “The Bold and the Beautiful” spoilers reveal that Quinn will suggest some tweaks to Ivy’s work and it’ll cause a major confrontation. Quinn will think she’s just being helpful, but Ivy will blow a gasket. Deacon (Sean Kanan) will try to settle Quinn down after Ivy gets on her last nerve. Quinn has always been a person who likes to speak her mind, but this tactic is a little new for Ivy. The personality change is taking everyone by surprise.

Nevertheless, Quinn will urge Wyatt (Darin Brooks) to rein in his girlfriend or else she’s going to do it for him. Poor Wyatt is continually caught between his woman and his mother. Luckily, B&B rumors hint that Ivy and Quinn will soon be on the same side. They may never be best buds, but they might be able to use each other to move up at Forrester Creations. Quinn, Wyatt and Ivy would all like to advance at the company and they’ll figure out a way to do it. Stick with “The Bold and the Beautiful” for updates on their big plan.

So B&B fans, what do you think about the news that Ivy will declare she’s in control? Will Steffy stand by and let Ivy run the show? Does Steffy really have a choice? Will Wyatt try to keep the peace between Ivy and Quinn? Let us know what you think in the comments below and don’t forget to check CDL often for the latest “Bold and the Beautiful” spoilers, rumors, updates and news.

Watch The B&B video spoilers and preview for Monday, August 24below