BY Heather Hughes on December 22, 2015 | Comments: one comment
Related : Soap Opera, Spoiler, Television, The Bold and the Beautiful 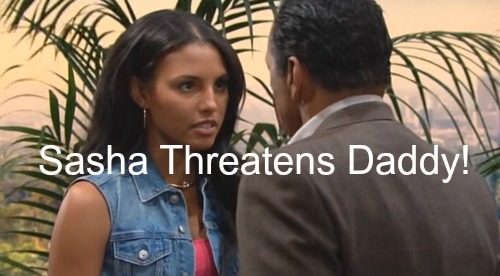 “The Bold and the Beautiful” spoilers for Tuesday, December 22, tease that Sasha (Felisha Cooper) will have some harsh words for Julius (Obba Babatunde). In Monday’s episode, Sasha dropped the bomb that many B&B viewers had been expecting and CDL told you about.

The big secret is that Julius is actually Sasha’s father. Now it seems Sasha is fed up with feeling snubbed by Daddy Avant.

Sasha will insist that she’s tired of being ignored while Nicole (Reign Edwards) gets all of Julius’ attention. Julius will probably just repeat his stance that Sasha should go home, but that’s wishful thinking. Sasha will grit her teeth and declare that she’s not going anywhere.

Julius has obviously had an affair he’d like to keep under wraps, but it may prove difficult with Sasha hanging around town.

Meanwhile, Rick (Jacob Young) will have a suggestion that’s in keeping with the Christmas spirit. “The Bold and the Beautiful” spoilers say Rick will tell Maya (Karla Mosley) that they should involve her parents in their holiday plans.

Things aren’t perfect between Maya and her father, but they’ve improved drastically since the wedding. There’s still some lingering strain thanks to the surrogacy situation, but maybe a Christmas gathering would give them another opportunity to ease the tension.

Other “Bold and the Beautiful” spoilers reveal that Ivy (Ashleigh Brewer) will admit to Liam (Scott Clifton) that she hasn’t been herself lately. All of this lashing out at Steffy (Jacqueline MacInnes Wood) has come from a place of anger and jealousy.

Ivy will indicate that she felt like she lost herself when she lost Liam. However, Ivy is convinced that they can get back what they once shared. Liam just has to agree to give their relationship one more chance.

Of course, Steffy is a huge obstacle here. Liam said he’d always care about Ivy, but could he learn to love her again? We’ll have to wait and see, but Steffy could wreak havoc if Ivy manages to steal Liam back. It sounds like Steffy and Ivy’s rivalry is about to heat up for the umpteenth time. Stick with the CBS soap for updates on their continued drama.

So B&B fans, what do you think about the news that Sasha will stand her ground? Will Julius have no choice but to back off? Will Maya go along with Rick’s idea? Can Ivy persuade Liam that she’s the one for him?

The Bold and the Beautiful (B&B) Video Promo for Tuesday, December 22