The Bold and The Beautiful (B&B) Spoilers: Is Sasha The Secret Daughter of Julius? 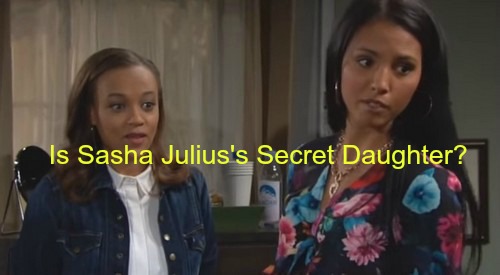 “The Bold and The Beautiful” (B&B) spoilers reveal that Julius Avant (Obba Babatunde) has a secret that only Sasha (Felisha Cooper) and him know. What could it be? Is Sasha an out-of-wedlock child that no one knows about?

The secret between the two of them seems to be one that allows Julius to get Sasha to do what he wants. She said she has always done what he tells her to do, and that doesn’t seem like a lover’s situation – more like a father’s influence over a child.

That would make Sasha the sister of both Maya Avant (Karla Mosley) and Nicole Avant (Reign Edwards). This secret could be very dangerous to Julius if Sasha is his daughter because she’s right at Nicole’s age – that means Julius had a side lady while with Vivienne Avant (Anna Maria Horsford).

However, it doesn’t seem like Sasha can leverage this secret to any real advantage right now. Julius has no money, no power, no nothing. And if Sasha spilled the beans to Maya and Nicole, they might not react well which could see her out of LA as penniless as when she arrived.

Instead, Sasha may leverage the secret to get Julius to play along with whatever she has planned. It would be very interesting to find out Julius had a love child after he’s been all high and mighty with Maya about her life choices.

Whatever the secret, it’s about time that Julius got taken down a notch or two (or even 10). B&B spoilers tease that Julius will continue to try and manipulate Sasha into leaving LA so his secret will stay safe.

But Sasha won’t go – remember when she complained that he promised to come back home but then didn’t. Sasha wants to be where Julius is – is that because she’s a daughter yearning for the approval of a father? Or is she his lover?

The possibility of them being intimate is pretty icky since she’s the same age as his teenage daughter. Daughter makes much more sense and is far less disturbing. Like any good soap secret, though, it won’t stay secret for long.

Will Nicole overhear Sasha threatening her dad or vice versa? Will it be Maya who finds out? Or will Sasha herself spill the beans if Julius exerts too much pressure over her to try and control her and get her out of town?

What do you think B&B fans? Is Sasha the love child of Julius and some other woman? If so, when it comes out, will Vivienne walk away from Julius? And will Sasha try and steal Nicole’s new life because she gets to be Julius acknowledged daughter while Sasha has to stay a dirty secret?

Share your thoughts in the comments below and be sure to check back with CDL often for more “The Bold and The Beautiful” spoilers.