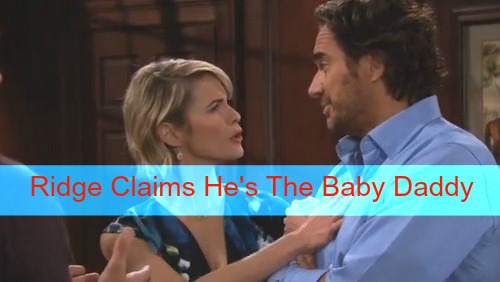 “The Bold and the Beautiful” spoilers for Tuesday, October 20, tease that Steffy (Jacqueline MacInnes Wood) and Ivy (Ashleigh Brewer) will try to keep the peace. Liam (Scott Clifton) practically ordered them to work things out and they were able to talk through some of their issues.

However, it shouldn’t be long before new ones emerge. That wasn’t the first time Liam’s had to intervene and it probably won’t be the last. Liam tried to remain neutral, but Steffy won’t allow that indefinitely. Steffy expects respect as the president of Forrester Creations and loyalty as Liam’s girlfriend.

Meanwhile, another loyalty will be tested. Thanks to Pam (Alley Mills), Charlie (Dick Christie) and Liam, it appears Caroline’s (Linsey Godfrey) secret will soon be making the rounds at the office. Naturally, Brooke (Katherine Kelly Lang) will know there’s a bigger cover-up in play.

“The Bold and the Beautiful” spoilers indicate that Brooke will be blunt with her friend and former flame. Since Brooke knows Ridge (Thorsten Kaye) can’t be the father, she’ll demand to know who’s responsible for this baby.

Ridge will try to quiet Brooke’s suspicions by claiming the doctor made a mistake. “The Bold and the Beautiful” spoilers say Ridge will insist that he’s fertile and he had the vasectomy reversed after all. Of course, Brooke may not believe that story. There’s a good chance Thomas (Pierson Fode) will have a few doubts as well.

Caroline told Thomas that she wasn’t pregnant, but he could put it all together once he realizes how far along she is. B&B rumors hint that this will cause even more drama between Thomas and Ridge down the road.

In the meantime, Steffy will wonder how the baby announcement will affect her brother. Thomas is already dealing with some resentment toward his dad. Thomas might resent Ridge even more when he sees him doting on another child and enjoying a beautiful life with the woman they both want. It sounds like this love triangle is far from over. Stick with the CBS soap for updates on the building tension between Ridge and Thomas.

So B&B fans, what do you think about the news that Steffy and Ivy will try to keep their agreement in place? Will Brooke buy what Ridge is selling? How will Thomas react when he learns Caroline is pregnant? Let us know what you think in the comments below and don’t forget to check CDL often for the latest “Bold and the Beautiful” spoilers, rumors, updates and news.