The Bold and the Beautiful Spoilers: Quinn Unleashes Fury On Brooke For Firing Wyatt From Forrester Creations

BY Cheri Magistro on May 26, 2015 | Comments: 6 comments
Related : Soap Opera, Spoiler, Television, The Bold and the Beautiful 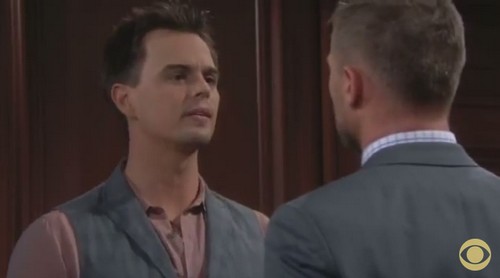 The Bold and the Beautiful spoilers are giving us a sneak peek into the new normal at Forrester Creations after the fall out of the Maya [Karla Mosley] fiasco hit them hard. According to new B&B rumors, one of the jewelry designers is fired! Not too surprisingly, Wyatt Spencer [Darin Brooks] gets the axe for his major part in bringing Maya’s transgender scandal to the forefront. Even as both Spencer brothers, Wyatt and Liam [Scott Clifton], try to explain that they both decided not to use Maya’s secret revealed by her sister Nicole [Reign Edwards], it doesn’t make any difference at Forrester Creations.

More shocking reveals from The Bold and the Beautiful spoilers and rumors we are learning about have mama Quinn [Rena Sofer] ready to fight for her son Wyatt to retain his position next to her at FC. After an extended honeymoon, Quinn returns to Forrester with a new sense of joy. Unfortunately, that not does not last very long when she hears her baby boy Wyatt has been fired. Additional Bold and the Beautiful spoilers are teasing that Brooke Logan [Katherine Kelly Lang] had the honor to relieve her son-in-law from his position. Of course, when Quinn learns that Brooke is responsible for axing Wyatt, things turn really ugly!

More confrontations and sharp letter opener scenes are sure to come! Brooke feels like her life is in constant jeopardy as she stands up for her son Rick [Jacob Young]. Quinn will not back down as she continues to take Wyatt’s side. Not only has Wyatt been fired, but now he is receiving anonymous death threats for releasing Maya’s personnel information to his father Bill [Don Diamont] and Spencer publications. Who could be wanting Wyatt dead for exposing Maya’s secret and trashing Forrester Creations in the process, a lot of people!? From Maya to Rick, Nicole, Ridge [Thorsten Kaye] and even Katie [Heather Tom]! This looks like it may play out as a “Who done it” if Wyatt is taken down.

So do you think Wyatt deserves these deadly repercussions for his role in this latest scandal to rock Forrester Creations? Let us know what you think in the comments below.

Watch The Bold and the Beautiful video promo sneak peek for May 27, 2015 below and enjoy!