BY Heather Hughes on May 26, 2015 | Comments: 4 comments
Related : Soap Opera, Spoiler, Television, The Bold and the Beautiful 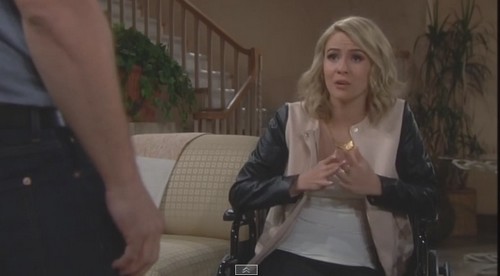 “The Bold and the Beautiful” spoilers for Tuesday, May 26, reveal Eric (John McCook) will argue that Ridge (Thorsten Kaye) isn’t quite the Forrester he thinks he is. It looks like Rick (Jacob Young) has succeeded in planting seeds of doubt about handing over the company to Ridge. Eric still hasn’t given his final decision about who will be in charge at Forrester Creations, but down-the-road spoilers seem to hint that Eric will allow Rick to stay in control. Fortunately, Ridge has a backup plan that could help him in his fight to bring Rick down.

Ridge will call Steffy (Jacqueline MacInnes Wood) and ask her to rush back to Los Angeles. If Ridge is going to take over the company, he’s going to need all the help he can get. “The Bold and the Beautiful” spoilers say Ridge will ask Steffy if she’ll pitch in. Steffy knows that Rick isn’t the right man to lead Forrester Creations and she’ll likely be game for whatever Ridge has in mind. B&B rumors say Ridge’s new plan may backfire, but that won’t stop him from trying. Stay tuned to the CBS soap to see if Ridge’s scheme will hit a snag.

Meanwhile, Caroline (Linsey Godfrey) will offer her two cents to Rick. Caroline will argue that Maya (Karla Mosley) would’ve never come clean if she hadn’t lost control of the situation. Without Brooke’s (Katherine Kelly Lang) pressure and Bill’s (Don Diamont) exposure, Maya probably wouldn’t have said a word about being transgender. In fact, Maya might still be living the dream at the mansion right now if Nicole (Reign Edwards) hadn’t arrived to stir everything up. Rick may have never known that Maya was keeping the secret of a lifetime from him. Maya insisted she would give Rick updates on her past when he proposed, but we don’t really know what she would’ve done if the circumstances had been different. Rick will likely say that Maya would have told him eventually, but what really matters to him now is what happens next. Can Rick and Maya find a way to sort this mess out? Stick with “The Bold and the Beautiful” to see if they have a future together.

So B&B fans, what do you think about the news that Eric may be having doubts about handing over the company to Ridge? Who would be the best leader for Forrester Creations? What about Caroline’s opinion on Maya staying silent? Do you agree that Maya only told the truth because she was forced to? Let us know what you think in the comments below and don’t forget to check CDL tomorrow for the latest “Bold and the Beautiful” spoilers, rumors, updates and news.

The Bold and the Beautiful video preview for May 26, 2015 below!