BY Heather Hughes on May 23, 2015 | Comments: one comment
Related : Soap Opera, Spoiler, Television, The Bold and the Beautiful 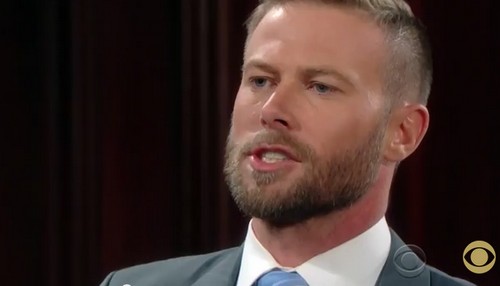 “The Bold and the Beautiful” spoilers for Monday, May 25, tease that Liam (Scott Clifton) will blast Bill (Don Diamont) for running the story on Maya (Karla Mosley). Liam will argue that Maya’s secret was something deeply personal and it wasn’t Bill’s story to tell. Bill will stand by his decision and assert that he just did what he had to do. However, Liam will believe that Bill has placed Spencer Publications in an awful position. Like Eric (John McCook) said, GLAAD could soon come after the company for printing something so scandalous about Maya.

Even if Bill wanted to release the story, there’s no denying that the way he put it out there was pretty trashy. Of course, “Dollar Bill” wasn’t exactly going for tasteful. Bill just wanted to make Spencer Publications a roaring success and bring Rick (Jacob Young) down in the process. No matter what Liam says, Bill will probably contend that this couldn’t be helped. In Bill’s eyes, Maya was simply a casualty of war.

Meanwhile, Rick will beg Eric to reconsider his decision. B&B viewers watched as Eric declared it was time for Rick to step down from the CEO position. Now Rick will plead his case and hope that his father will stand up for him. “The Bold and the Beautiful” spoilers reveal Rick will insist that Eric shouldn’t listen to Ridge’s (Thorsten Kaye) attempts to make him sound like an unfit leader. Instead, Rick will say that Ridge is the one who’s always up to no good.

Rick will try to get Eric to see that Ridge takes so much from so many people. It looks like Eric will buy at least some of what Rick is selling. Either that or Eric will decide that he shouldn’t kick Rick when he’s down. Based on future “Bold and the Beautiful” spoilers, it appears Rick will get one last chance to turn things around. Rick better hope he can get his act together. The rumors say that Ridge’s new strategy could put Rick’s job at risk once again. Stay tuned to the CBS soap to see if Ridge will win the battle for power with a little help from Liam and Steffy (Jacqueline MacInnes Wood).

So B&B fans, what do you think about the news that Liam will give Bill a hard time about the story he ran on Maya? Were Rick and Maya fair game considering all their bullying over the last few months? Will Liam and Steffy help Ridge make some sneaky updates to his plan? Who will ultimately gain control of Forrester Creations? Let us know what you think in the comments below and don’t forget to check CDL tomorrow for the latest “Bold and the Beautiful” spoilers, rumors, updates and news.

Watch The Bold and the Beautiful video preview sneak peek for the week of May 25, 2015!