‘The Bold and the Beautiful’ Spoilers: Liam Insists on Getting Back Steffy and The Life Quinn Stole, Wyatt Outraged 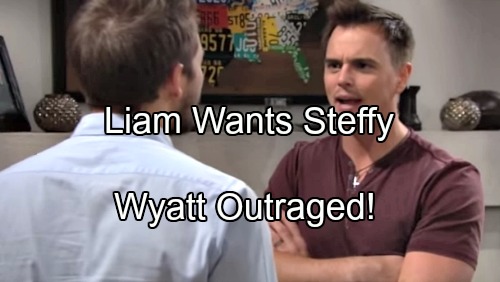 The Bold and the Beautiful (B&B) spoilers for Wednesday, August 31, tease that Eric (John McCook) will grill Steffy (Jacqueline MacInnes Wood) about her true feelings. He knows his granddaughter isn’t pleased with his decision to get involved with Quinn (Rena Sofer). Steffy was even angrier when Eric moved Quinn in the mansion.

However, walking out on Wyatt (Darin Brooks) because of it is a little extreme. Eric will wonder if there’s more to the story. In Tuesday’s episode, Eric suggested that Steffy was just using this as an excuse to get close to Liam (Scott Clifton). Now Steffy will have a chance to defend her actions.

Steffy will remain in denial for the most part. She’s choosing to blame everything on Quinn’s relationship with Eric, but we all know Liam is a factor. Steffy never stopped loving Liam and that’s taken a toll on her marriage.

Steffy tried to honor her commitment, but now she’s been given the perfect reason to bail. Of course, Steffy is right about one thing. All of this goes back to Quinn. She’s the one who ruined everything by keeping Liam out of the picture for so long. Steffy thought Liam had abandoned her and that was tough to swallow.

Once Liam returned, Steffy was stuck with her second choice. Wyatt should probably try to understand that and step aside, but it’s obvious that he won’t. He’ll fight for Steffy until the bitter end.

Still, it’s possible that Wyatt’s luck hasn’t run out just yet. The Bold and the Beautiful spoilers indicate that Ivy’s (Ashleigh Brewer) arrival could actually benefit Wyatt. Ivy will track down Quinn and ask for a fresh start at Forrester Creations. This will be the beginning of a sneaky alliance that could keep Liam and Steffy apart.

Before we get to all of that, Ivy will have to plead her case. B&B spoilers say Ivy will admit that she’s not particularly proud of her behavior last year, but she’ll want to leave that in the past. Ivy will insist that she’s coming back to Los Angles with a whole new perspective.

Quinn will take pity on Ivy and allow her to resume her duties at the company. Naturally, she’ll expect Ivy’s total loyalty in exchange. Quinn likes to be in control and it looks like she will be. Ivy may have to do even more behavior she’s not particularly proud of!

In the meantime, Liam and Wyatt will get into a major argument over Steffy. Wyatt will maintain that he shouldn’t have to suffer because of his mother. Quinn put Liam in a brutal situation, but Wyatt won’t think that gives his brother the right to destroy a marriage.

Liam will contend that there’s nothing to destroy. He’ll believe Steffy wants out of this sham ASAP. The Bold and the Beautiful preview video shows Liam saying, “Sooner or later, Steffy and I are going to continue to life that Quinn stole from us.”

Is Liam right? Will he be able to get everything back on track with Steffy? We’ll give you updates as other news comes in. Stay tuned to B&B and don’t forget to check CDL often for the latest Bold and the Beautiful spoilers, updates and news.