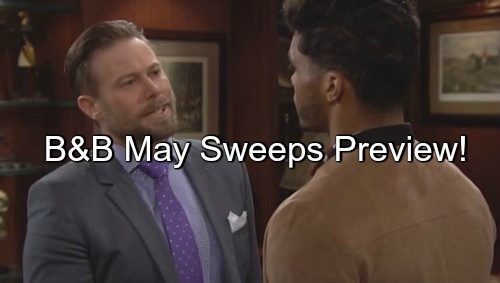 “The Bold and The Beautiful” (B&B) spoilers for May Sweeps reveal more drama for Liam, Steffy, Quinn and Wyatt while the Douglas paternity secret spills out – Nicole’s baby is born amid turmoil, and there’s corporate intrigue at Forrester Creations.

For those that thought Quinn Fuller (Rena Sofer) would roll over and play dead now that her Adam and Eve game is busted, think again! Quinn cannot give up on her love for Liam Spencer (Scott Clifton) and even turns to Steffy Forrester (Jacqueline M Wood) for an assist.

The Bold and the Beautiful spoilers say Liam comes back to Spencer Publications and ignores his father Bill Spencer (Don Diamont) and Wyatt Spencer’s (Darin Brooks) request that he back off and respect Wyatt and Steffy’s marriage. So when Quinn approaches Steffy to help her get back with Liam, will Steffy listen?

Can Quinn convince Steffy that she truly loves Liam and is the best thing for him? How shocking would it be for Steffy to advocate on behalf of Quinn to Liam? We’ll see how Steffy handles the request. We also wonder if Quinn will face arrest in May sweeps – no spoilers yet on “Eve” in handcuffs…

The Douglas paternity question will also spill out in May sweeps. Katie Logan (Heather Tom) is like a dog with a bone and won’t leave Ridge Forrester (Thorsten Kaye) alone. When Ridge lies and says he and Caroline Spencer (Linsey Godfrey) used a sperm donor, that’s too much for Katie.

Katie talks to Caroline who later regrets something she tells the nosy lush. Katie seems to figure it all out but will she be the one to spill the beans to Thomas Forrester (Pierson Fodѐ)? B&B spoilers hint that Thomas finds out the truth in an unusual way, but from Katie, and what happens next is stunning.

The Avant drama including the big confrontation where Julius Avant’s (Obba Babatunde) wife and daughters force him to finally tell the truth pushes Nicole Avant (Reign Edwards) into early labor. Looks like the baby will come earlier than expected but will end up healthy.

Maya Avant (Karla Mosley) and Rick Forrester (Jacob Young) are thrilled to meet their bundle of joy and Nicole doesn’t make a fuss about handing over a baby that’s biologically hers. Of course, she’s got her eye on getting back with Zende Forrester (Rome Flynn) and also has sister drama to deal with.

B&B casting spoilers reveal that lawyer Ed LeRosa will show up for a two-episode arc – possibly during sweeps. But is this guy a lawyer for Quinn as she faces arrest for kidnapping Liam? Or could it be for Thomas as he fights for custody of his son Douglas? We’ll see.

Also, once Rick has the baby drama out of the way and the Douglas truth spills, will he make a run at the CEO chair knowing Eric Forrester (John McCook) might side with him when Ridge’s dirty laundry comes to light? Maybe…

Katie’s drinking and antics continue to spiral and Bill may make a move to keep Will Spencer away from her which sets Katie off more. Plus, even though Bill pushes for Quinn to pay for her crimes, because she won’t quit pursuing him, Liam decides to deal with her on his terms.

What do you think B&B fans? Are you thrilled that May Sweeps will finally see Thomas reunited with his son Douglas whom he obviously adores? Do you think Ridge and Quinn will pay for their treachery?